Steve Way back to winning ways in Salisbury 54321, news from France, Parkruns and Pier-to-Pier Swim 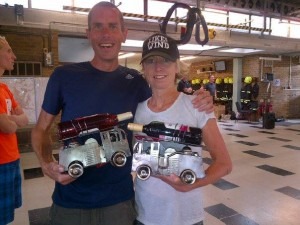 Following his dramatic win round the coastline of Jersey, Steve Way was again an Ultra-Distance race winner, this time in the 50k race of the Salisbury 54321 on Sunday 9 August. This event is so called because it consists of races of 50k, 42k, 33k, 21k and 10k over footpaths, bridleways and some quiet country lanes, with Salisbury as its base.  Of 289 who finished the 50k race, Steve was the winner in 3.18.37, thus breaking the course record he set last year by just under 5 minutes, and an indication that Steve‘s preparations for the World 100k Championships in Winschoten, Netherlands on September 12 are on track.  (More information on Steve‘s blog www.steveway.co.uk.) Steve was joined in this race by Andy Gillespie, who ran well to finish 81st, and 3rd M55, in 5.13.33.  In the 33k race, of a total 175 who completed the distance, Graeme Miller was a superb second, in 2.18.27.

John Boyes normally competes with Robbie, his dog, in the joint ‘dog-and-owner’ races which seem to be more common in France than here.  However, Robbie recently sustained an injury from which, thankfully, he is now recovering.  But it has meant John has had to compete on his own!  Recently, John ran in the Trail de Boudinaires, a hilly trail race of 6.99 miles which he completed in 59.53, 25th overall and 7th V2.  John describes this as a “satisfying run” after two weeks training.

To catch up on the Parkruns, BAC athletes have been active in Bournemouth, Poole, Salisbury and Blandford.  In Kings Park, Bournemouth, Damian Boyle finished 6th on both 1 and 8 August, of 374 and 351 finishers respectively.  On 1 August, Damian was joined by Cherry Sheffrin, hopefully returning after injury, and Helen Ambrosen, so prospects for strengthening BAC‘s ladies team are good!  Tony Hunt also ran, but further down the field than would be expected, so it looks as if Tony is not on top form at the moment.  On 8 August, in addition to Damian, Nikki Sandell, Joe Price, Abigail Richardson, Louise Price, Katrina White (good to see Katrina back for a while from University in Leeds!), Ian White, accompanying his daughter, and also, once again, Helen.  Over at Poole, in Poole Park on 1 August, a very welcome sight was Jacek Cieluszecki, finishing second (of 675).  Hopefully this marks a return to competition, with the Aldershot Road Relays and Cross Country season approaching!  In third place was Karl Welch, and not far behind was Ross Smith.  The following week, 8 August, whilst his colleagues were on the coach heading for the final BAL fixture in Yeovil, Karl was running a PB in the Poole Parkrun to finish 3rd.  In 7th place was Paul Dixon-Box, 12th Simon Munro, and 19th a rapidly improving Brandon Meredith. At Salisbury, Andy Gillespie was preparing for his 50k Salisbury 54321 race by running a PB in the Salisbury Parkrun, in which he was 25th of a total of 154, and 1st VM 55-59.  Meanwhile, at Blandford, Jez Bragg was second in the Blandford Parkrun on 8 August, well over his PB time, but maybe evidence of a recovery from his recent tribulations in Wales.  Competing in the Blandford Parkrun for the first time was Gemma Bragg, finishing 10th overall, and 1st lady.  Incidentally it’s well worth having a look at www.sidetracked.com/jez-bragg/ for a fascinating interview with Jez, and some amazing photos.  There’s more information on Jez‘s activities on his blog www.jezbraggblogspot.co.uk.

Not strictly (or at all!) road running, but congratulations to Janie Chapman on completing the 1.25 mile Pier-to-Pier swim (Bournemouth to Boscombe) in 52.20.

Also not strictly road running, but worth mentioning that Janet Dickinson is competing in the World Masters Championships in Lyon, France.  Congratulations to Janet on completing the F45-49 Heptathlon in 10th position.  To illustrate how tough is this event, eight of the original competitors dropped out.  Janet says she “did quite well in the javelin throw – clearly inherited something from Ben (Janet‘s son)“! 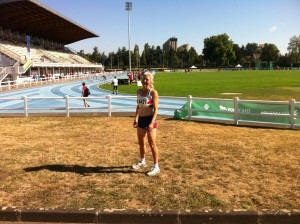