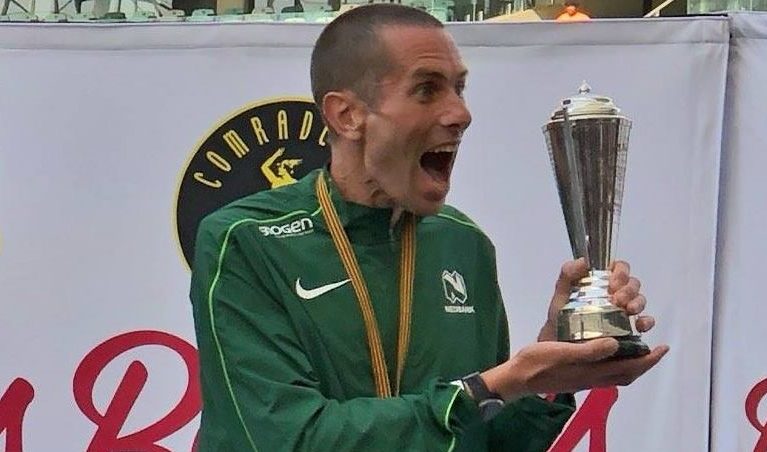 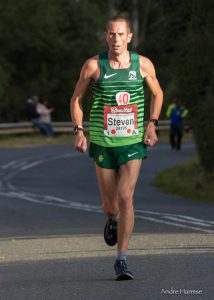 Going into the Comrades Marathon off the back of a very solid block of five months worth of uninterrupted training, Steve Way‘s preparation for the race had been as close to perfect as it was ever likely to get.

Registering some extremely clinical and cut-throat victories in the Bournemouth 10, the Bournemouth Bay Half Marathon, the North Dorset Village Marathon and the Dorchester Marathon, Steve was undoubtedly in fantastic shape.

As well as running a very good 50k race at the Anglo Celtic Plate, Steve had also managed several other well-paced long training runs of 30 plus miles that had had the Strava community in awe. And, more importantly, he’d hit all  of his huge weekly mile targets, giving him every reason to be optimistic about another gold medal winning performance at Comrades.

The race is steeped in history and has seen many of the true greats of ultra distance running doing battle over the years. The race alternates each year between an ‘up run’ and a ‘down run’ always being staged between the cities of Durban and Pietermaritzburg in South Africa.

The distance can vary as the course always changes slightly year-on-year but it’s generally around 90 km (56 miles). Due to the vast distance and the extreme and constant undulations throughout, the Comrades Marathon is known in many ultramarathon circles as the ultimate human endurance race.

For the South African people, the event is an intrinsic part of their culture and when the race comes around, the whole country comes to a standstill (except those running of course) and watches, cheers on or just marvels at the runners as they take on the challenge.

On the day of the race, it’s almost like it’s one big festival, up and down the country and it’s clear to see what it means to the people. The Comrades Marathon is ‘their’ event and they take great pride in it. They do it in their own unique way and it would surely be fair to say, no one else in the world can do it better.

This enthusiasm and significance of course translates to the runners as well and over the years, the South Africans have well and truly mastered the race. This is emphasised by their sheer dominance in the standings each and every year.

To break the mould of a South African 1,2,3 is extremely difficult. To infiltrate the trend of an African 1,2,3 is almost unheard of. It is extremely rare for a European runner to finish in the top ten even, like Steve did last year. In fact, he and Fritjof Fagerlund of Sweden were the first Europeans to do it since Jonas Buud in 2014, which demonstrates how hard it is.

So what were the aims for Steve this time round? First and foremost, it would take a great performance to improve on last year’s 9th place. If he could do that, that would be a success. The dream for Steve though was a top five finish. How realistic that dream was was yet to be determined.

Last year, Steve ran the race entirely on heart rate, monitoring it throughout and sticking to a level that he felt he could maintain for the duration of the race. That seemed to work as he gradually worked his way through the field, picking people off progressively throughout the race.

This year though, he decided to adopt a new tactic, which was to go with the group of favourites. He knew they’d start off a bit faster than he would have done otherwise but it was important to stay in touch with the top runners if he wanted to finish right up there.

The first mile of the Comrades Marathon is basically about ensuring you don’t get trampled on by the surge of runners as they head off on their journey.

After a quick first mile at 5:26 minute mile pace, the group of favourites, including Steve, settled down to 6 minute miling for the next four miles which were uphill.

On the downhill sections they were really ramping the pace up, averaging 5:22 for the 6th mile which was on a very steep decline. From mile 8 to mile 12 it was all uphill and, although he was able to stay with the group of favourites, Steve felt he was exerting more energy than he should be at this stage. 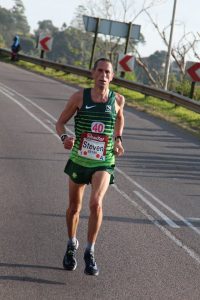 He felt he was running more at marathon pace in terms of effort and was worried that if he continues at that pace he might end up struggling later on in the race. At the same time though, he didn’t want to allow himself just to drop off the back of the group as it would have almost felt like giving up.

Instead, he decided to do what any runner would in that situation and stop for a wee. That then relieved the pressure of having to run at such an intense pace and enabled him to relax a bit.It later turned out that that wee might have cost him £5,000 but hey… When you’ve gotta go, you’ve gotta go.

As a result of the pit-stop he’d lost around 10 places, putting him back to 38th place at the 30k checkpoint. Now the race was on for Steve. He needed to take control of his own pace and work his way back through field. 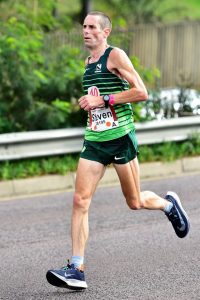 After his £5,000 pee, Steve began to set out reeling in the people in front of him one by one

Steve had Trevor Witcher and his wife Sarah out there with him and Steve had requested that they let him know what position he was in and how many minutes off a gold medal he was as he went past them at the 54k point, so he could tell how far behind the 10th place runner he was.

As it turned out, Steve was in 11th place, which was further up the field than he thought and crucially, he was only 2 minutes off the person in 10th. That was a good sign. From that point onward it was mostly downhill to the finish in Durban.

The tactic from here was to keep going until he saw someone in front of him, focus on catching that person and once he’s picked that person off, find the next one and do the same. As he seemed to be catching people one by one it was easy to count down so he could work out what position he was in, or so he thought. 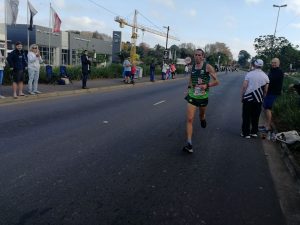 With just 20k to go he was in 8th place, so there was still a fair amount of work to do. He was finishing strongly though and whilst others were getting tired, Steve’s excellent race strategy began to pay dividends.

He’d soon overtaken three more people and was up to 5th place with 9k left to go. This was the ultimate dream for Steve and he was so pleased to have achieved it.

The race was shown live on South African TV and there was also an online stream that could be watched around the world. The commentators on the live coverage were quite shocked to see Steve going so well.

They had been concentrating mostly on Bongmusa Mthembu who had strode away from the rest of the field and was out in front by quite some distance. They hadn’t been paying too much attention to what was going on behind and didn’t seem to notice Steve’s rapid rise in the standings.

The commentators did seem quite impressed by the fact that Steve had acquired the use of a downhill treadmill to train on. They had apparently drawn the conclusion that Steve must live in an area where there are no hills!

As he approached the magnificent Moses Mabhida stadium for the grandstand finish, Steve was closing in on the runner in front of him. The gap between the two of them was now less than half a minute. But he’d run out of road and it turned out he’d have to settle for what he’d got.

Steve crossed the line thinking he’d finished 5th which he was over the moon about. He’d realised his dream and it was an amazing and emotional moment.  It turned out though that Steve can’t count. He’d actually finished in 3rd place. 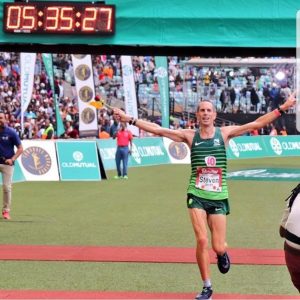 Steve crossed the line in an incredible time of 5:35:27 which was 14 minutes quick than he did on the ‘up run’ the previous year

As he was embraced by his Nedbank team manager Nick Bester, Nick then broke the news to him that he’d actually come in 3rd position. Steve was in shock. He’d been overjoyed with what he thought as a top five finish. Now it was a moment of absolute euphoria as he learned he’d taken a podium spot. It was simply beyond anything he could have imagined.

With an  official time of 5 hours 35 minutes and 27 seconds, Steve had indeed claimed a place on the podium of the Comrades Marathon, the world’s biggest and most prestigious ultramarathon. It was a truly remarkable achievement. His average pace for the entire 90.2 km (56.3 miles) was an astonishing 5:57 m/m. 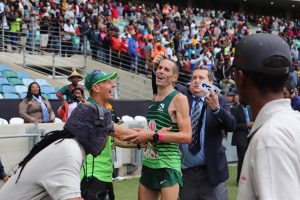 Steve was the first European to secure a spot on the podium since Jonas Buud in 2013 and he was the first Brit to do so since Cavin Woodward in 1976.

As it turned out, he’d finished a mere 18 seconds behind Joseph Mphuthi of South Africa who had taken 2nd place. If the race had been half a kilometre further he would have surely taken 2nd place. And if it wasn’t for that pit-stop he’d had to make he quite possibly would have finished 2nd. The difference in prize money between 2nd and 3rd has resulted in it rather humorously being labelled as the infamous £5,000 pee.

With all his prize money and bonuses added together though, Steve earned around £15,000 before tax for his 3rd place so it was still a very lucrative race. In fact it was more money than he’d won in the rest of his running career combined. 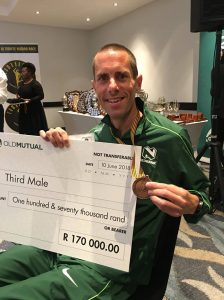 Of course, it’s not all about the money though. It is about the sense of achievement. It’s about the satisfaction you get when you’ve worked really, really hard to achieve something and it all comes together on the day and the accomplishment is realised. 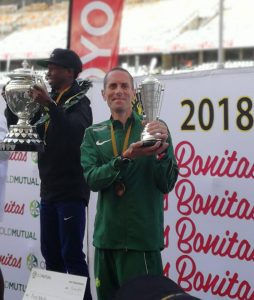 Steve said afterwards that it was the best day of his life and his greatest ever performance – and he’s certainly had some good ones in the past to compare it to. That gives some indication of just what an incredible feat it was to come 3rd in the Comrades Marathon. 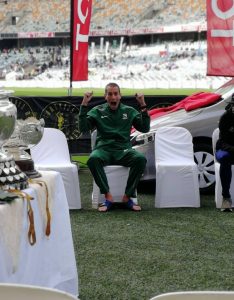 On top of the gold medal he’d won for a top ten finish, Steve was also given a fantastic looking trophy and a bronze medallion for his 3rd place. He was also awarded a rather humongous cheque for 170,000 Rand (South African currency). It’s certainly going to be fun and games trying to get that through customs on the way back. 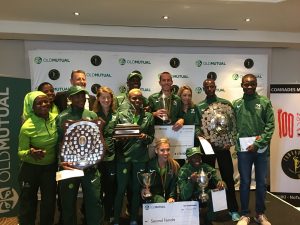 Off the back of his monumental performance, Steve is hopeful that he might just have done enough to earn him a place in the British team for the World 100k Championships in September. If the UKA do come calling, it will certainly be well deserved for Steve. 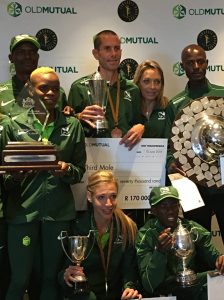 It wasn’t just his club that he did proud that day. And it wasn’t just Dorset runners either. He did the whole of British Athletics proud. And if he hadn’t already done so, Steve has certainly now cemented his status as one of the true legends of the sport. 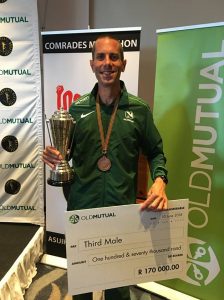