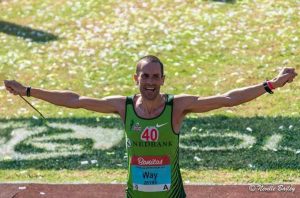 Another incredible chapter has been written in the book of Steve Way’s extroadinary running achievements  after a truly formiddable  performance at the Comrades Marathon in South Africa.

Comrades is the world’s largest and oldest ultra-marathon with a maximum field of 20,000 and competitors lining up from over 60 different countries. The race was first conceived back in 1921 to commemorate South African soldiers killed in World War I and is steeped in tradition and culture.

The route alternates between starting off in Durban and running approximately 87 kilometres through to Pietermaritzburg and every other year, it is vice-versa. This is significant because of the extremely hilly profile of the course. It meant that this year, the first 50km were predominately uphill, with the last 35k mostly downhill.

The dream for Steve Way was to complete the race in under 6 hours and secure a top-ten finish to claim one of the much coveted gold medals that are awarded only to top-ten finishers. 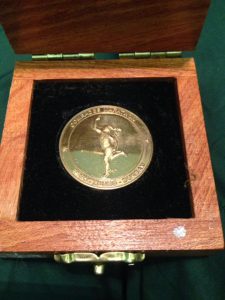 Going for gold! Steve’s aim was to claim one of these medals for finishing in the top ten

Of course, having a dream like that and putting it into practice are two entirely different things. Steve had been struggling to capture the kind of form he was in in 2014 when he ran his fastest London Marathon and set a new British 100k record.

He had had a couple of set backs with his training in the earlier part of the year due to colds but had since got back on track and was certainly putting in the mileage in. His name was regularly at the top of the BAC Strava leaderboard with 100+ mile weeks.

When the day of the Comrades arrived, Steve felt that he was 90% where he wanted to be with his training going into the race. He took the somewhat unconventional approach to run the race entirely on heart rate monitoring, as opposed to pace or position.

Given the profile of the course, with the elevation gain being so high over the first 50k and the remainder mainly on a descent, this would have made it hugely difficult to manage the race based on pace per mile. 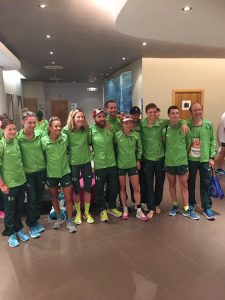 Steve with his Nedbank International teammates

This tactic turned out to be a masterstroke for Steve as it enabled him to go the full distance with equal effort, maximising his potential throughout the race. At the first checkpoint, 18.2km in, Steve was down in 112th place.

Whilst that may have alarmed some runners who harboured top ten hopes come the end of a race, Steve had done his research on the Comrades Marathon. He knew that many of those who started the race off quickly would fall away in the latter stages.

By the next checkpoint, 29.7km in he was still only in 94th place, but he remained calm and disciplined, running at a average pace of just over 4 minutes per kilometre. Despite his position in the field, the race was going to plan for Steve. This was exactly where he wanted to be.

Steve had climbed to 47th place in the standings by the next checkpoint, which was 42.7km into the race, so almost at the half way point. Although he’d moved up the field, Steve’s pace had remained constant, at just under 4 minutes per kilometre for this split. Not that he knew that though. He was only concerned with his heart rate.

By the next checkpoint, 56.7km in, Steve was in 28th place and was making serious inroads into catching those front runners. At the 66.7km mark, he had moved up to an incredible 19th place.

This was the point where Steve knew his goal of finishing in the top ten was achievable. But he still had to make up nine more places in the final 20km.

Before the next checkpoint at Polly Shortts, there was still one big climb left. This presented Steve with a chance to take the remaining places he needed to sneak into the top ten. As he began to pick the runners ahead of him off, one by one, he saw his dream gradually becoming reality.

And indeed, by the final checkpoint at 79.2km, Steve had risen to 9th place where he was able to remain for the final run down to the finish at Pietermaritzburg. He completed the race in a staggering time of 5 hours, 49 minutes and 40 seconds. This was a only 14 minutes behind the race winner.

Not only had Steve managed to achieve his target of finishing in the top ten, thus collecting a solid gold medal, he had also won the trophy for “1st novice”. 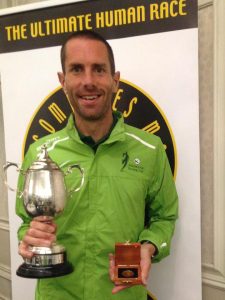 It had been widely depicted the first timers just don’t do well at the Comrades. Most athletes need to have done it at least once before to be able to manage a race like that. Steve Way was the exception to that rule though.

Steve was also the first European to finish the race, which given the standard of athletes that the race attracts, is quite an achievement. In fact he was the first person to finish who wasn’t from Southern Africa, coming in just ahead of his Nedbank International teammate Fritjof Fagerlund, who is Swedish. 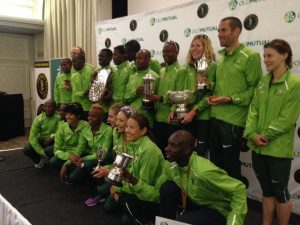 The utter elation when he crossed the finish line was very evident on the TV coverage for all to see. It was a defining moment for Steve and he had proved, to himself more than anything, that he has still got what it takes to be one of the very best.

Steve said afterwards that his experience of the Comrades might just have eclipsed his London Marathon performance of 2014 where he came from nowhere to finish 15th, sending the commentators into  a frenzy and achieving the Commonwealth Games qualifying time of under 2 hours 17 minutes.

The Comrades Marathon is a truly unique race and is held in very high esteem by the people of South Africa, to the point where the whole country stops to watch. And one thing is for sure… If they didn’t already, they will all now know the name of Steve Way, that guy from a small running club in southern England. 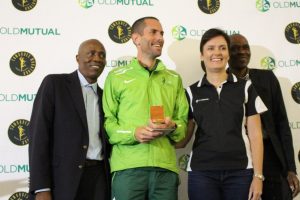