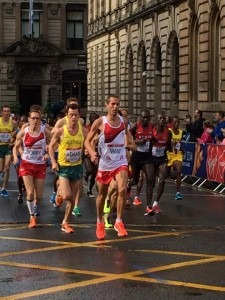 It has already been extensively reported all over the media, but Steve Way‘s phenomenal achievement in the Commonwealth Games Marathon in Glasgow on Sunday 27 July is well worth repeating. Steve finished in 2.15.16, thus accomplishing his three targets – a top ten finish (Steve was tenth), a PB, and a new British Veteran Marathon record, a record held until Sunday by none other than Ron Hill for decades. To throw in the mix is the fact that Steve was the first Englishman to cross the line, absolutely justifying his selection for the team. Steve had, before Sunday, clearly caught the eye of the media, and it wasn’t therefore surprising that during the marathon coverage there was considerable focus on him, starting with Paula Radcliffe mentioning Steve within moments the commencement of transmission. Steve was then interviewed by Jonathan Edwards at the finish line, and it was a great pleasure to see Steve appear on BBC 1 later in the evening, alongside Ian Thorpe and Sir Chris Hoy, in discussion with Gary Lineker, reputedly the BBC’s highest paid presenter. Then, an hour or so later, there he was again, this time with Clare Balding, and that programme included a very nice touch when Sarah, Steve‘s wife, was interviewed by Clare (with Steve looking on wide-eyed!), and Sarah‘s unstinting support for Steve was acknowledged and applauded by the live audience. Sarah mentioned that they have been together for 17 years, so she knew Steve as a 16+ stone smoker and drinker, and has seen the change over the last seven years to the dedicated athlete we all see now. It wasn’t just BBC TV – Steve‘s exploits were featured on radio and in the national and local press, including one spot on Radio 4’s ‘Today’, their prestigious early morning news and comment programme, when Professor Somebody-or-Other, talking about sport and ‘older’ people (this wasn’t the specific ‘sports’ item) said “As Steven Way has said……………………” !! So not only has Steve proved to be a consummate interviewee, he has caught the eye of academia! What Steve has done is just amazing, and we are so proud and privileged to count him amongst our number. Of course, it isn’t all over yet, by any means, and we wish Steve every success in his next endeavours, the 100k World Championships in Qatar later this year, and the Comrades’ Marathon in South Africa next year. 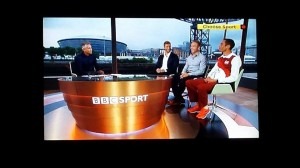 There is some other news to report, but stay with us for some more photos of Steve later on. BAC had a winner in the form of Paul Hill in the Bournemouth Parkrun on Saturday 26 July, and in 10th place, with a PB, was Brandon Meredith, followed in 10th by Jud Kirk. Duncan Wells was also a welcome sight in the race, working his way back to fitness, and also running were Ian Graham and Will Price. Meanwhile, in Poole Park, Joe Arundel was second in the Poole Parkrun, followed in third place by Simon Munro. 205 competed at Bournemouth and 441 at Poole. The next day Paul was 6th in 37.54 (of 252) at the Durberville Dash, a 10k multi-terrain race, which was won by Karl Welch in 36.10.
And so back to Steve……………………………… 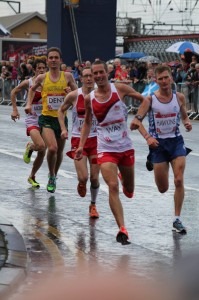 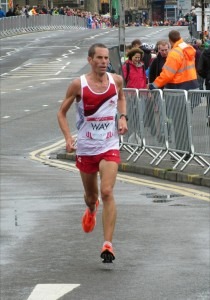 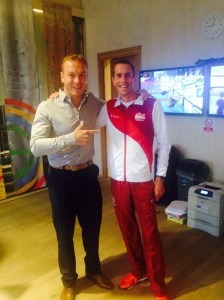