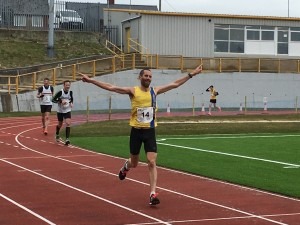 BAC is very fortunate to count Steve Way and Jez Bragg, two nationally and internationally recognised Ultra runners, amongst its athletes. Both Steve and Jez competed this weekend, displaying the talent we all admire.

Steve ran in, and won, the Barry 40 Mile Track Race on Sunday 20 March, a gruelling 161 lap event which is the longest Ultra race in the UK.  Steve‘s aim was to beat the World V40 best time of 3.59.24.  Controlled, disciplined running resulted in a race win in a time 3.54.52 – objective achieved!  Steve‘s first words to Sarah, his wife, as ever present to support him, of “I’m back” were highly appropriate! 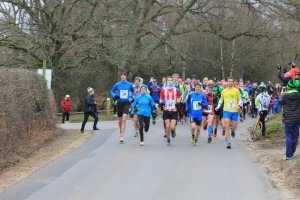 Jez Bragg, appropriately number 2, on his way to 2nd place in the NF50k

The previous day, Saturday 19 March, Jez ran in the New Forest 50k race, part of the New Forest Festival of Running, consisting of a variety of off-road races.  Jez has had to put up with a number of ailments and niggles recently, and this particular race was not in his original schedule.  However, at a very late stage, Jez felt in sufficiently good form to enter this race, and so ran without any specific preparation, and without the taper usually considered necessary for such a distance.  So it really demonstrates Jez‘s ability that he finished second, of a total of 72 (and a number of DNFs) in 3.40.47.

Well done to Steve and Jez – we are very proud of you!