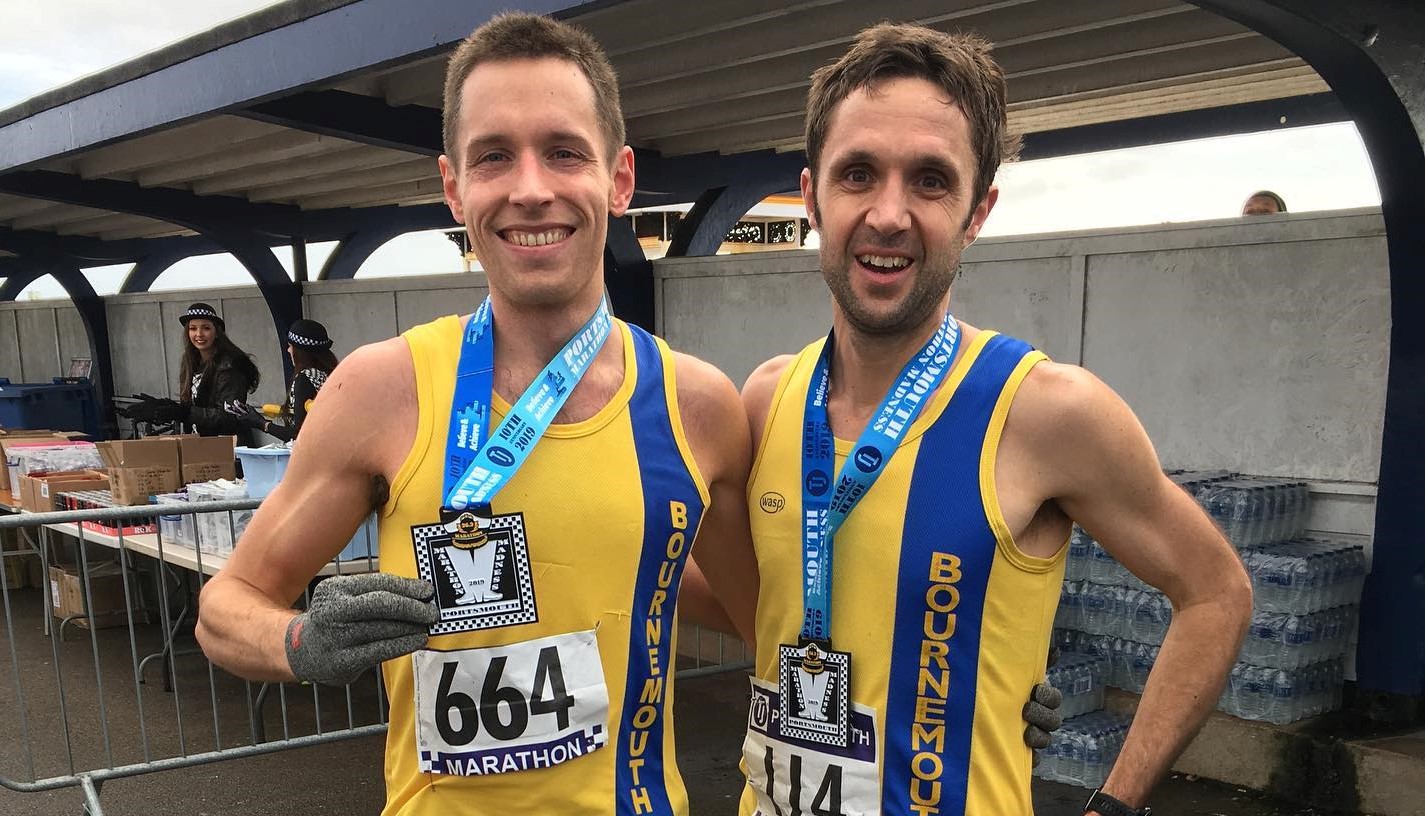 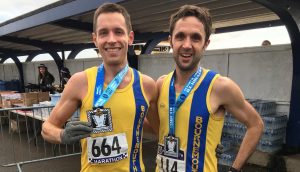 What better way to prepare for the Christmas festivities than running a marathon three days before the big day? It certainly provides you with a great opportunity to create a big calorie deficit which can then in turn be filled with all the mince pies, turkey and Christmas pudding that you can shovel down. And perhaps even more so when it’s one that is as testing as the Portsmouth Coastal Waterside Marathon.

As well as being a few days before St. Nicholas comes down the chimney, it was also the day before Stu Nicholas‘s birthday, so he was certain to have two reasons to celebrate at least. Could he make it one more though this time round by ending the season with a victory?

Two years ago in fact, he did do just that, in this very race, seeing off the challenge from Neil Kevern of Bracknell Forest Runners to seal the win in a time of 2:47:12.

Stu would very much have loved to repeat those heroics in the 2019 edition. This year he was joined in the race by his Bournemouth AC compadre Jez Bragg.

Jez is a well known and highly respected member of the running community, not just in Dorset, but also on a national scale. He’s competed for his country numerous times, including at the Anglo-Celtic Plate 100k, where he won on a couple of occasions. He also took home a gold medal at the Commonwealth 100k Championships.

He also ran across the entire length of New Zealand which was 3,000km, taking 53 days which made him the fastest person to have done that on foot.

More recently he’s completed the Berghaus Dragon’s Back Race, which was 315 kilometres with 15,500 metres of ascent. In what might perhaps even be his biggest achievement to date, Jez completed the Tor des Geants, where he covered a total distance of 394km in 95 hours and 24 minutes.

Despite all those incredible achievements, Jez has been suffering an ongoing battle with Ulcerative Collitis and Crohns, a lifelong inflammatory Bowel Disease. That has seen him go through some very difficult times over years but he’s never thrown the towel in and the fact he has had to battle such a vicious illness makes his successes seem all the more unfathomable.

Having completed the Beachy Head Marathon at the end of October in a race where his BAC teammate Jon Sharkey stopped off to get married half way through, Jez proved there that he had a marathon in him.

The Portsmouth Coastal Waterside Marathon would be Stu’s 12th marathon of the year and despite making it to the 50 marathon landmark and the end of last year, his enthusiasm to go the distance had not been quelled. In fact, he’d even stepped it up a notch when he completed the Roseland August Trail 100k along the coast of Cornwall.

The course for the Portsmouth Coastal Waterside Marathon runs from South Parade Pier to the end of the Hayling Billy Line and back, providing a unique blend of multi terrain surfaces for the participants to get to grips with.

To begin with it was Pete Concannon in his first ever marathon who took the race by the scruff of the neck. He set off at a furious pace, leaving everyone else including Jez and Stu for dust. 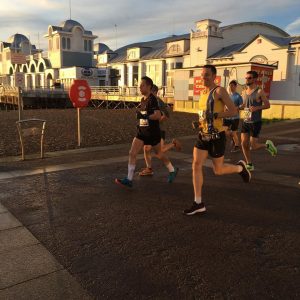 Stu comes past the pier at Southsea

Chris Brebin Sayers was in second place but was quite a way back. Then it was Stu and Jez. The BAC duo were together up till 11 miles. That was until Stu had to stop to tie shoelaces. That was a rookie error that could have proved costly. 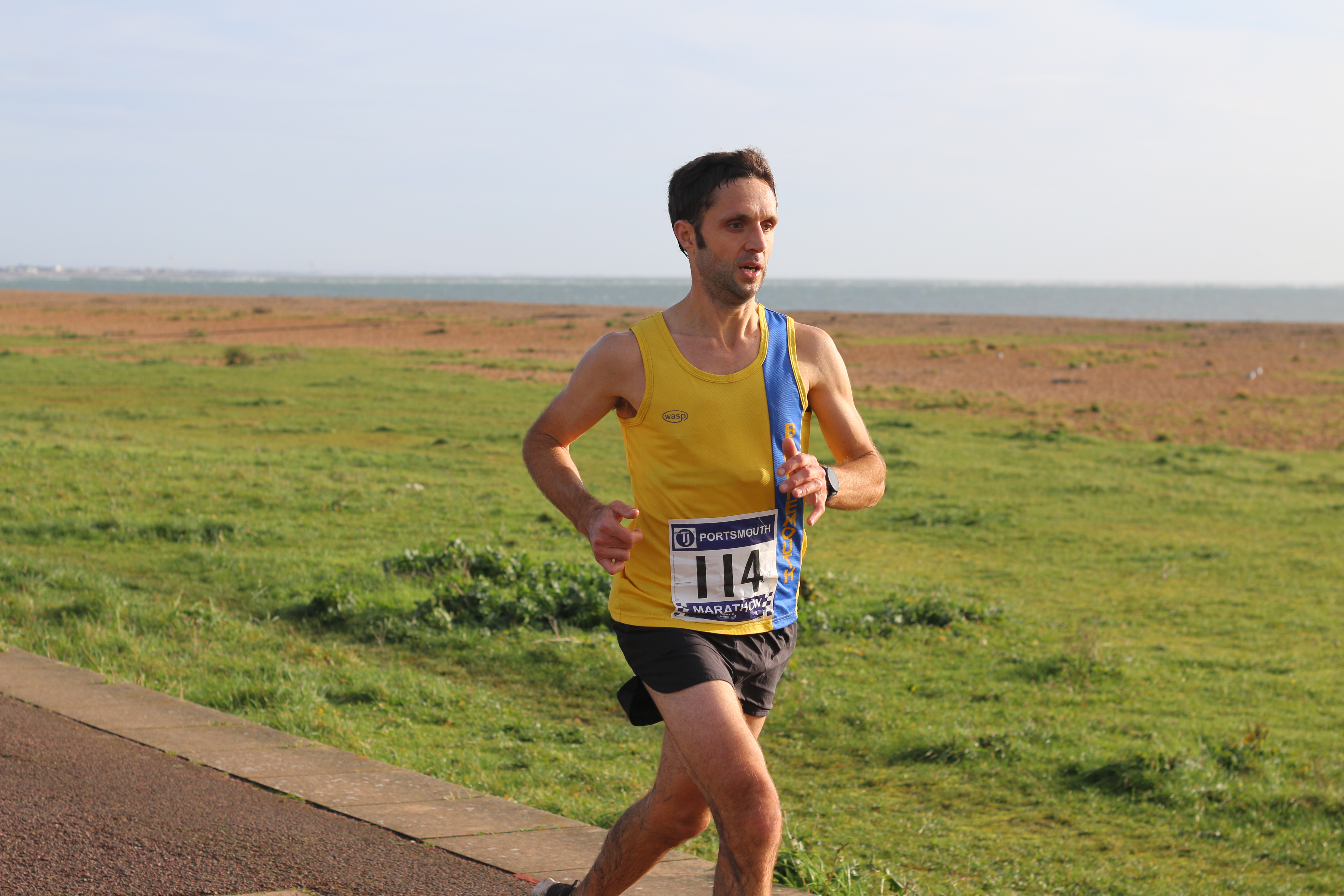 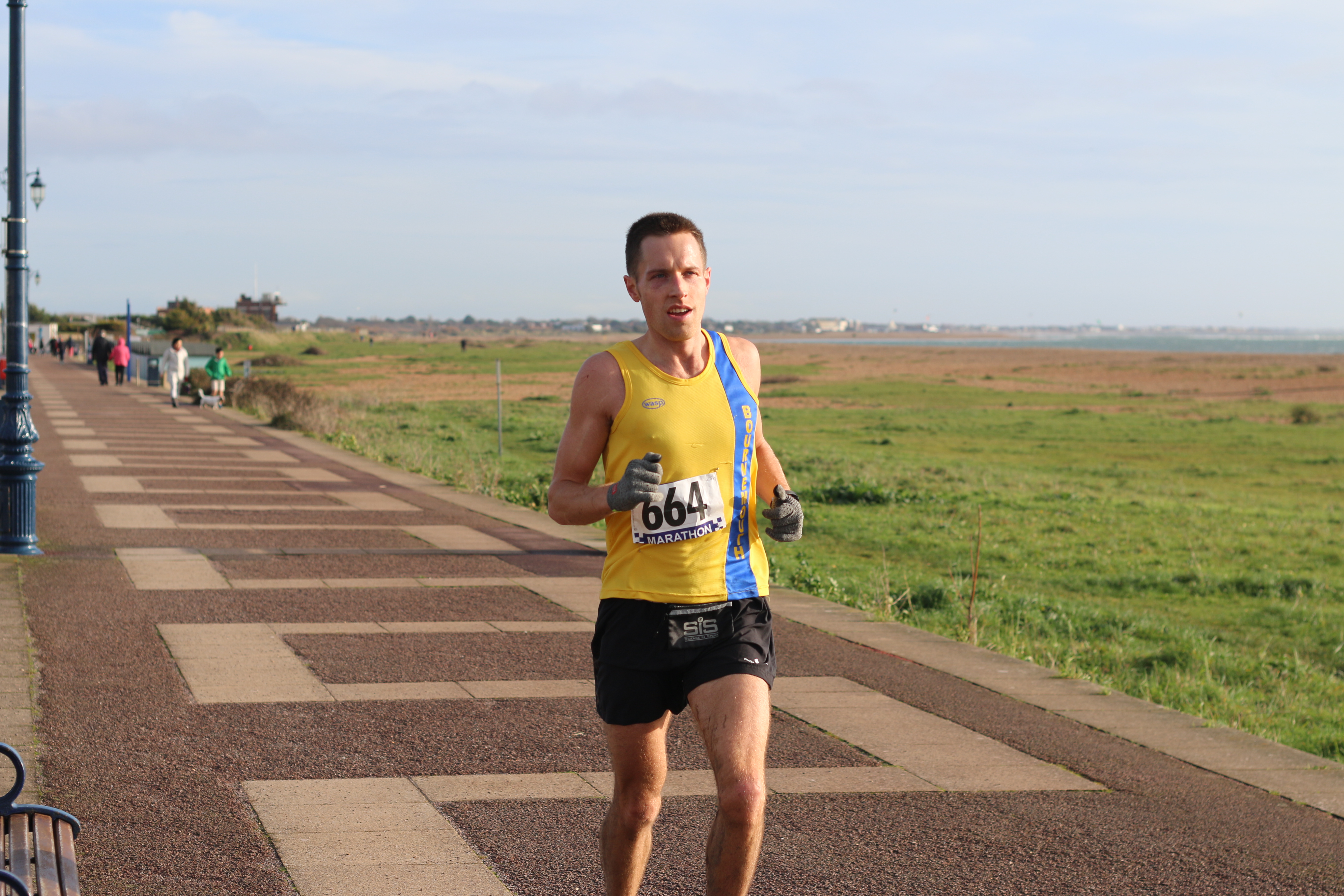 Although his shoelace had come undone, Stu’s challenge in the race remained firmly intact

Fortunately for Stu, he was able to come back and catch Jez up. He then decided to press on and began to pull away as they approached the turning point.

It was then a case of trying to reel in the two guys who were still out front. That wasn’t going to be easy though by any stretch of the imagination. Pete Concannon had blasted through the half way point in a superfast time of 1:20:27. 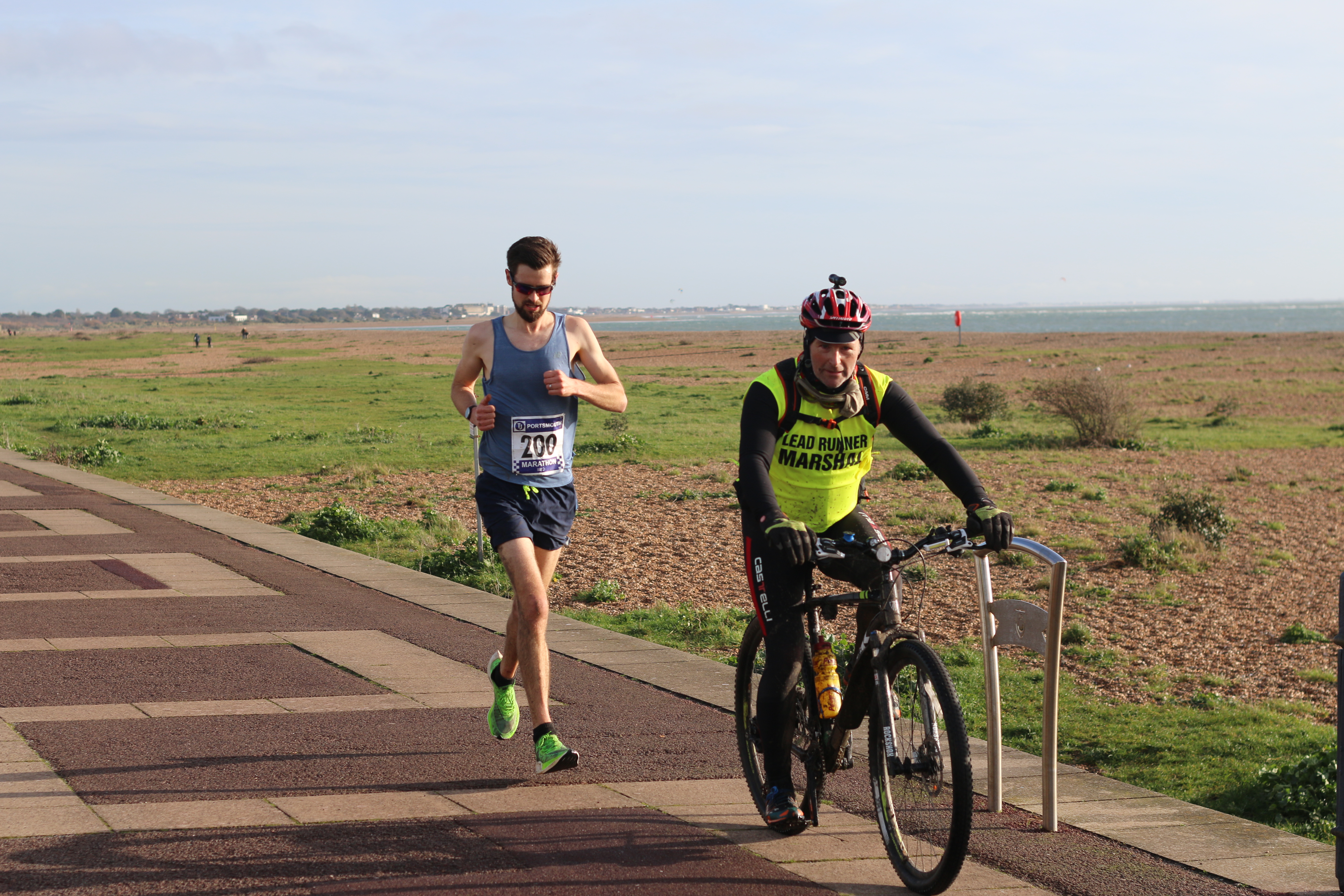 Pete Concannon led the way in his first ever marathon, blitzing the first half in 1 hour 20 minutes 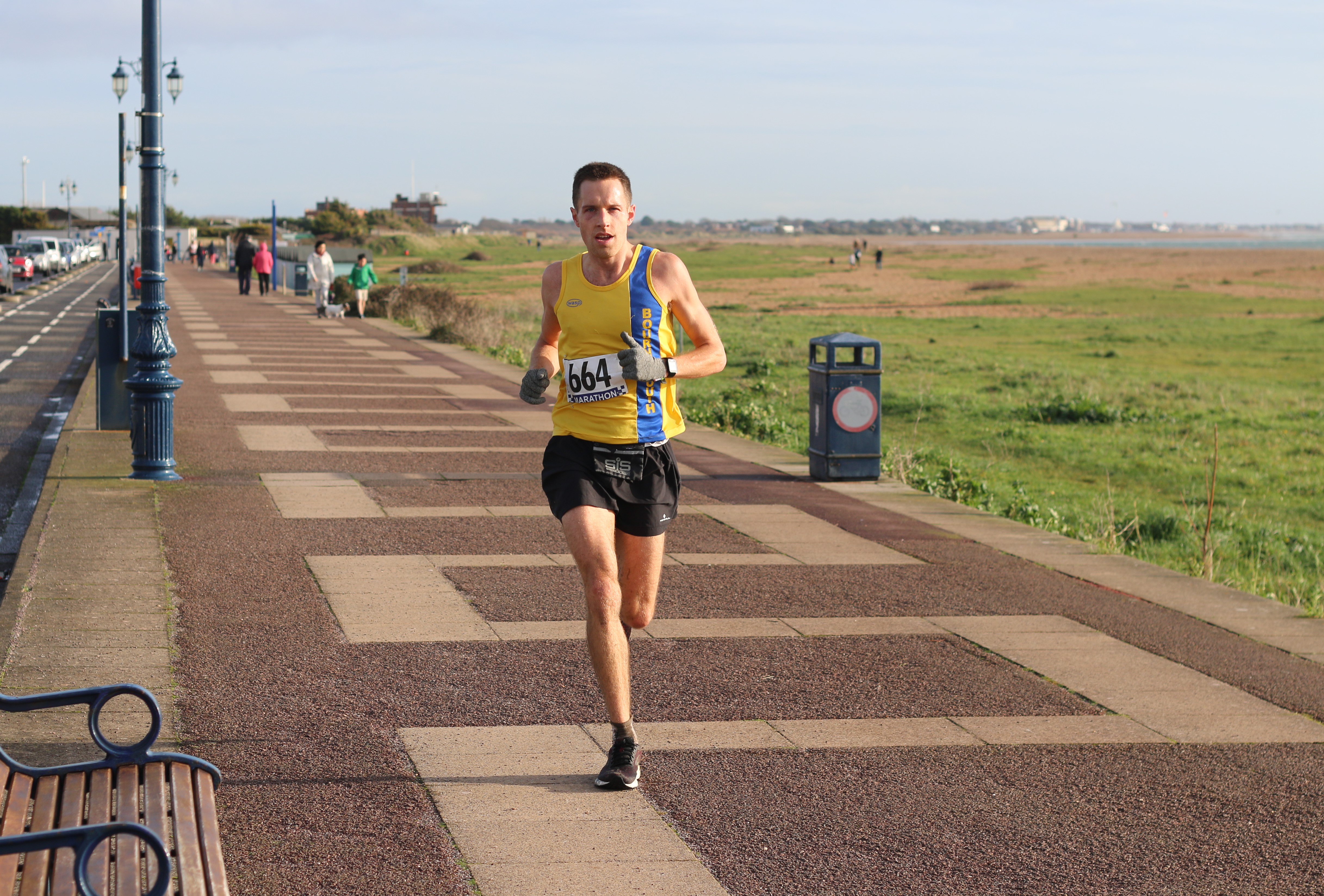 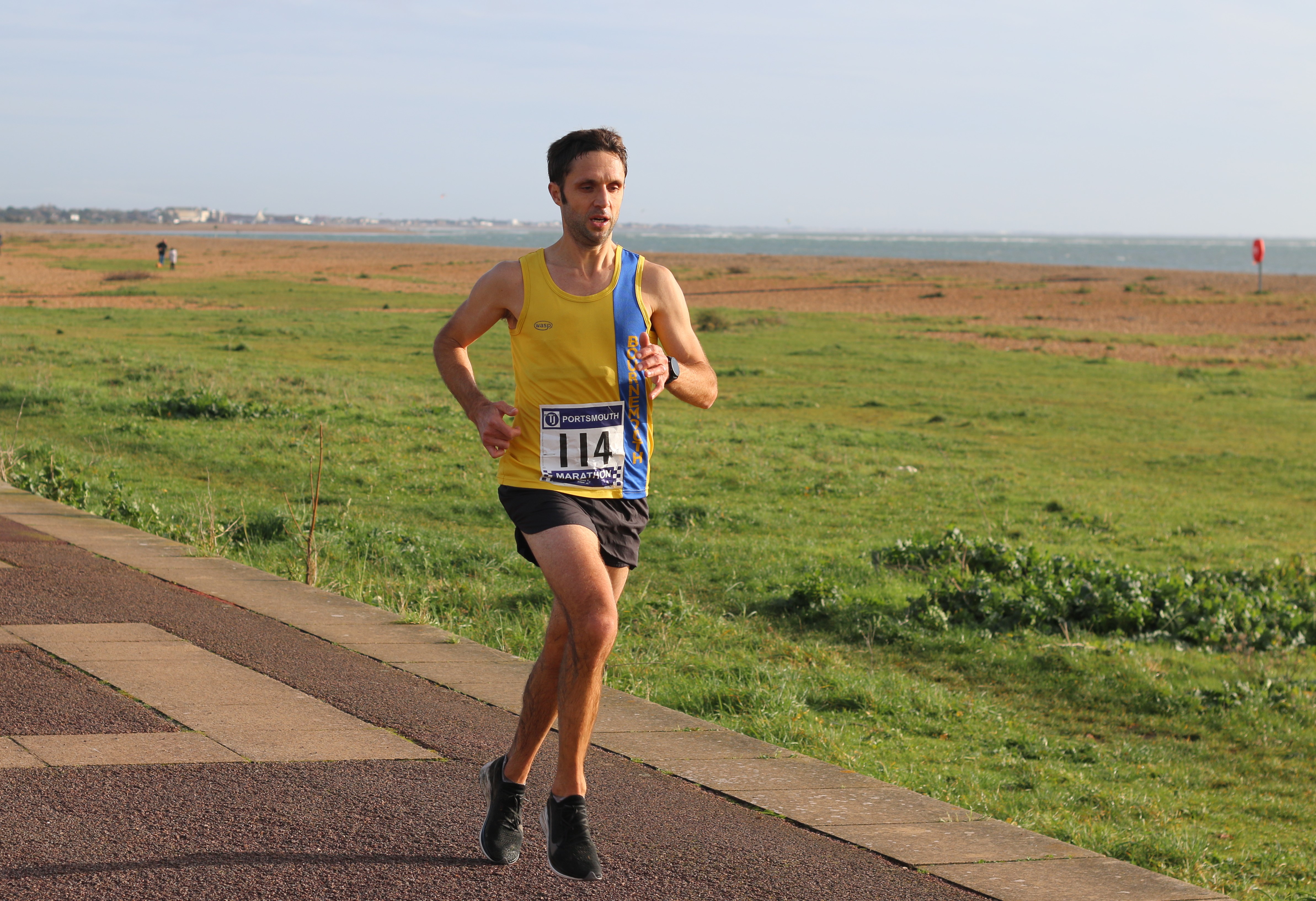 Jez was fourth when he went through the half way stage in 1:25:56

Chris Brebin Sayers blew up massively over the second half of the race and it wasn’t long before both Stu and Jez had gone past him. The race was on now for Stu and he’d got into a good rhythm and set about chasing Pete down. 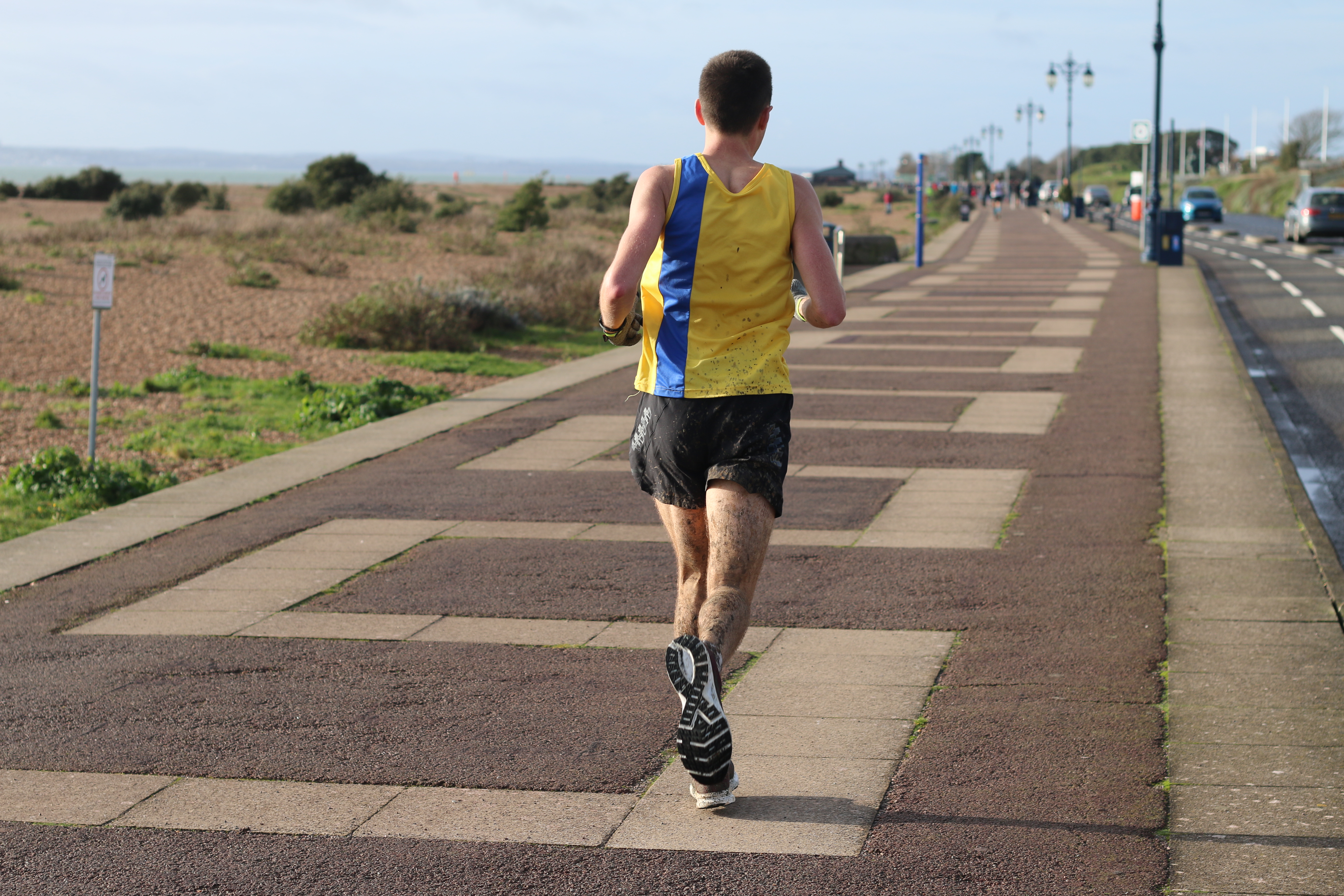 Stu makes his way down the long, straight promenade 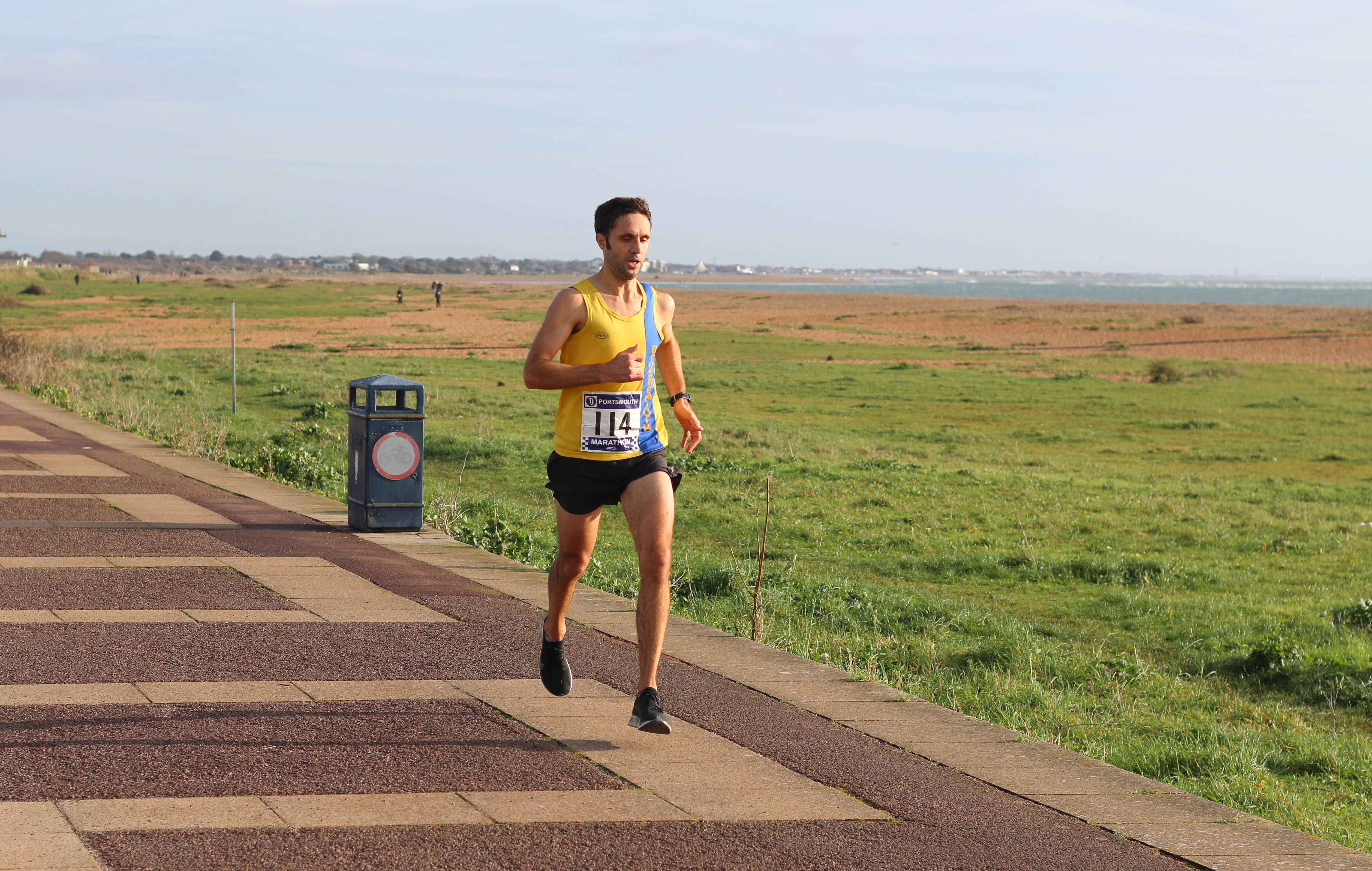 Jez was following shortly after Stu

It seemed an almost impossible task to make up five minutes over the second half of a marathon but it was worth a go. Pete began to fade and his pace dropped significantly. Stu stayed strong and was progressively eating up the ground between them. 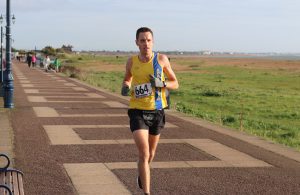 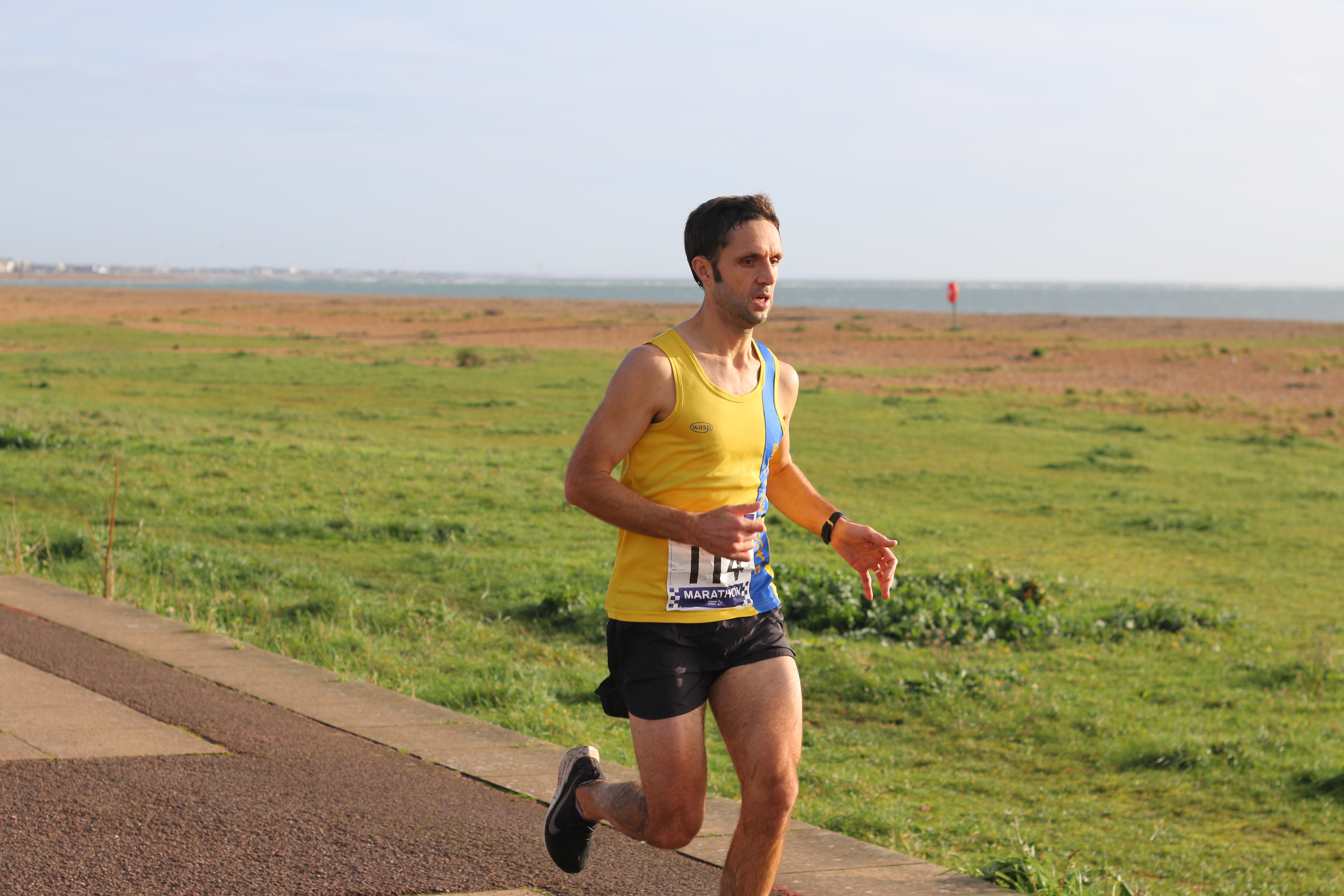 The gap between the two had been dramatically reducing to the point that there was now only seconds in it. Unfortunately for Stu though, it was too late and Pete made it to finish line before he could catch him. 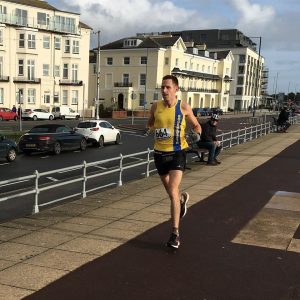 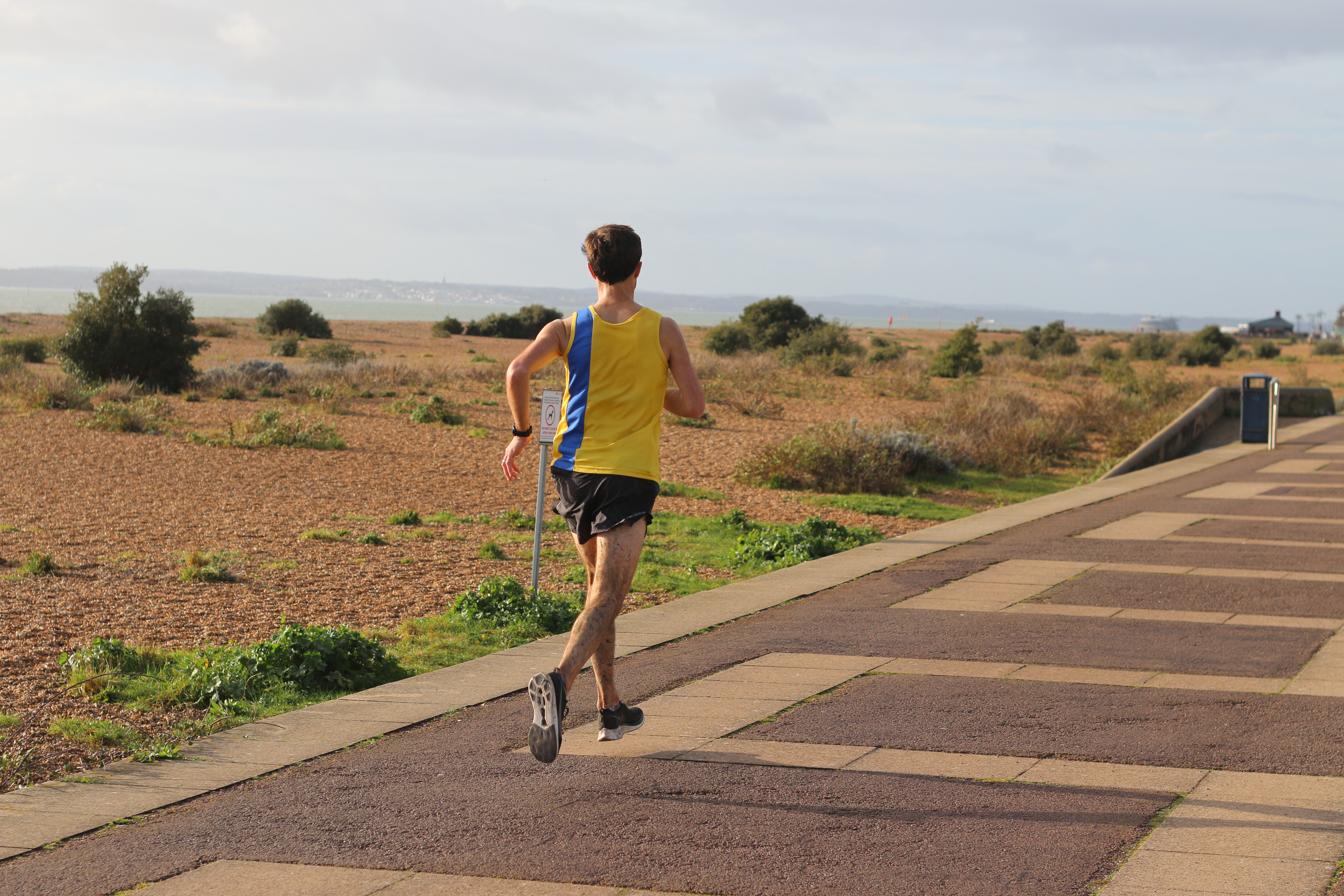 Alexander Whearity of Reading Joggers was the only man to come in in under three hours. After such a promising first half of the race, Chris Brebin Sayers slipped to 8th place in the overall standings on this occasion. 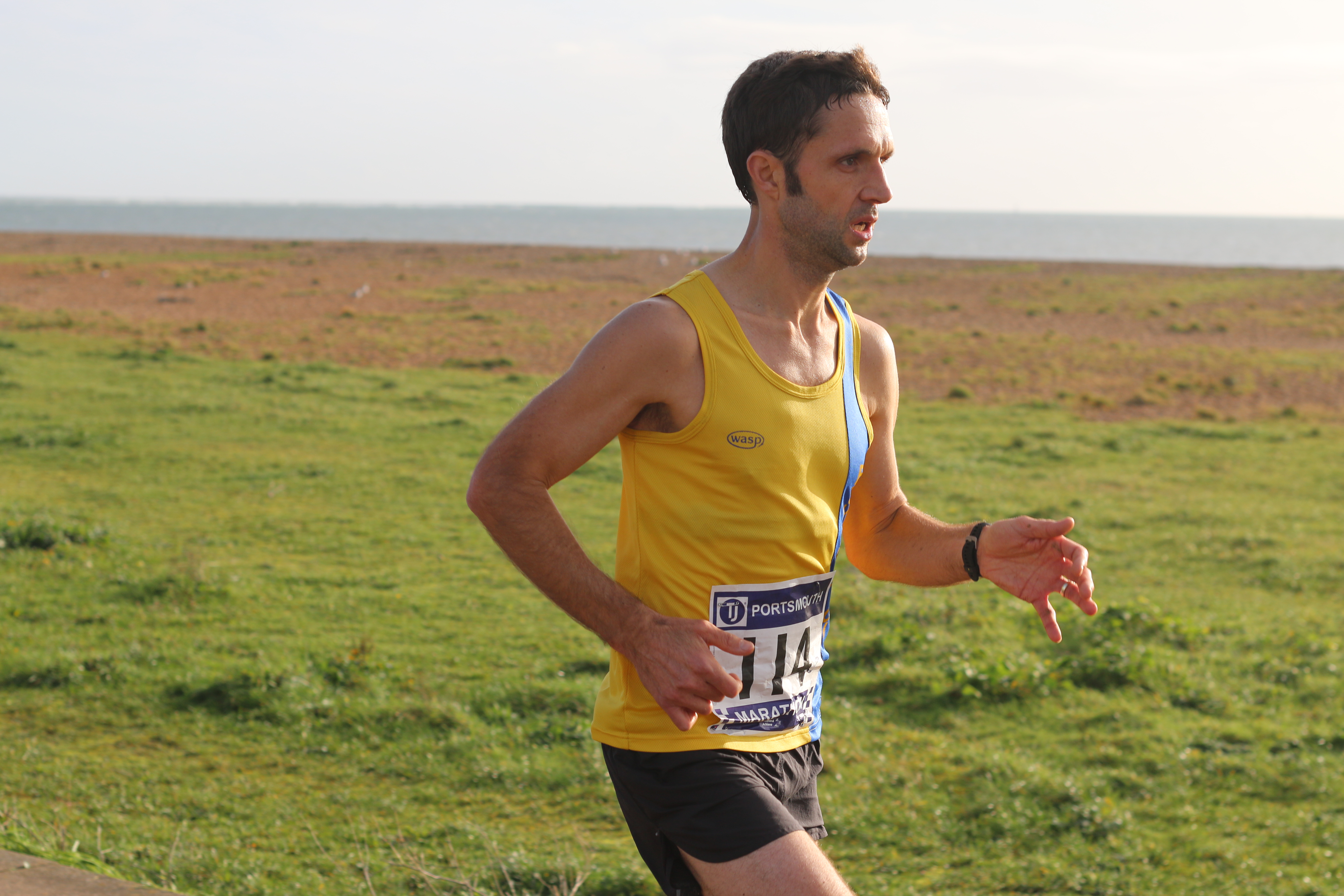 Even though they didn’t pick up the race win on this occasion it was great to see the Bournemouth AC pair running so well. Considering he hadn’t really done any specific marathon training and the fact that he has to just get out as and when he can due to having a small child, it was a very good run from Jez’s perspective.

He completed the second half of the race in 1:27:46, which was less than two minutes slower than his first half. As for Stu, he actually ran his second half faster than his first, completing it in 1:25:11. That demonstrates how strong he is at the moment.

It was Stu’s fifth time of running the Portsmouth Coastal Marathon and his 12th marathon of the year. There could easily have been a temptation to tone it down for Stu after he reached his 50 marathon landmark at the end of last year but he hasn’t really done that. He’s kept on going.

Stu enjoys the Portsmouth Coastal Marathon so much that he’s already signed up for the race again next year and no doubt he will once again be a serious contender to pick up the race win. 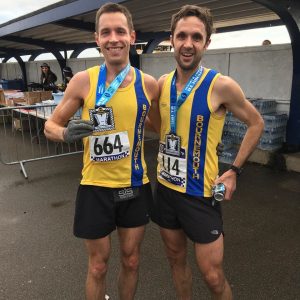