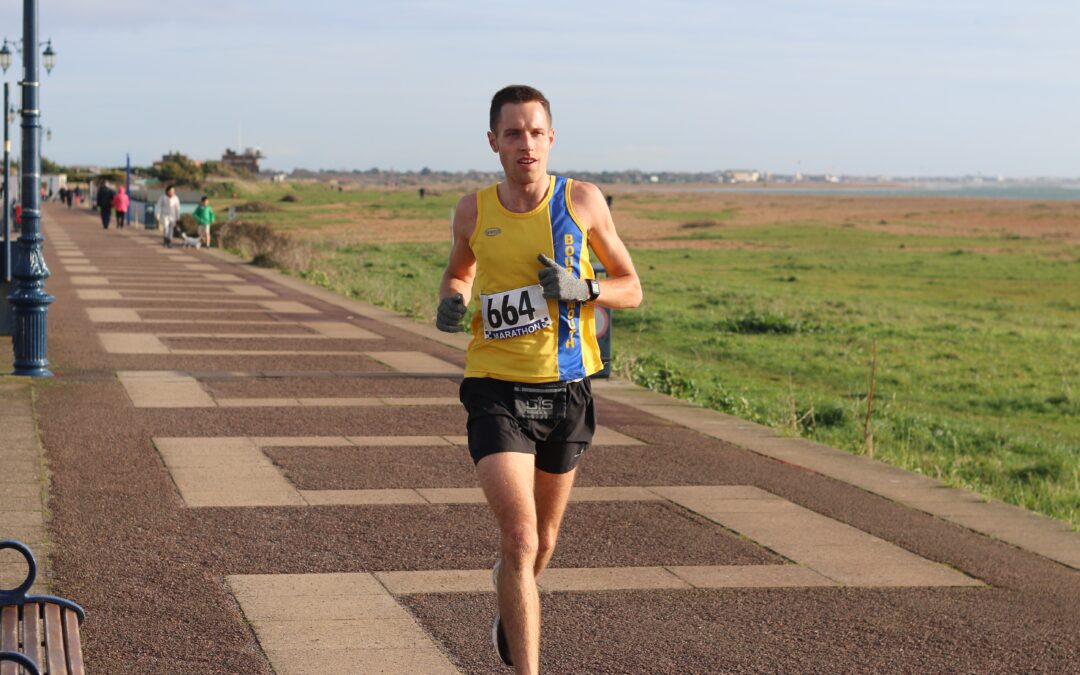 Going into the race with the aim of hitting around 6 minutes 30 average mile pace, Stu Nicholas was expecting to complete the Portsmouth Coastal Marathon in around 2 hours 50 minutes. Suffice to say, the race didn’t quite go according to plan – but in a good way.

It was a race Stu had tasted victory in before in 2017 when he ran a phenomenal time of 2:47:12 on a course that was almost 27 miles long. That year he had to pull all the stops out to finish ahead of Neil Kavern of Bracknell Forest Runners. Then two years later he was back and very nearly claimed the crown again but was forced to settle for second place in the end, crossing the line in 2:50:29.

He was closing in on the leader all throughout the second half of the race and with five minutes to make up he’d managed to get the gap down to 23 seconds. Unfortunately he just ran out of time in the end. 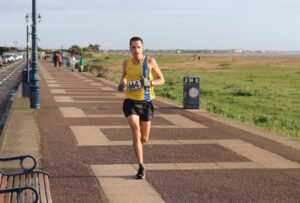 2021 had been a year where Stu hadn’t raced all that much in comparison to what he would usually do. He did complete The Plague 100k race at the Roseland August Trail event though, securing a top ten finish after falling a couple of times during the night and facing torrential rain when daylight broke.

He also won two Phoenix Running ‘Medusa’ Marathons, back to back, in November, which was a very impressive show of strength. Would he be able to add to his tally of wins though at the Portsmouth Coastal Marathon?

Stu was chatting to the guys on the start line and one of them, Robert Fryer, said he wanted 2:40 something and his plan was to average 6:15 minutes per mile. At first Stu decided to just do his own thing and see what happened. It soon became obvious though that if he did that it was going to be a very lonely race, so he made an effort to to catch up with Rob who was leading. That resulted in a super quick first mile of 5:51. 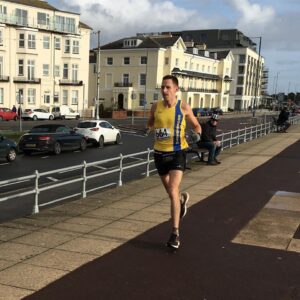 The conversation was flowing between the two of them and the conditions were almost perfect. Stu said he was going to stick to his original plan and revert to 6:30 pace from the half way point.

After passing the half marathon marker in a lightening quick 1:19:12, Stu attempted to slow down but it was one of those situations where everything falls into place and it seems effortless, so he stayed with Rob.

They were going at around 6 minute mile pace, so much faster than the projected speed that Rob had had in mind. At mile 20, they agreed that they would finish together unless one of them blew up, since they’d been together for the whole race.

Rob’s PB was 2:43, which he recorded at the infamously short Manchester Marathon of 2019. Stu’s was also 2:43, which he set at Brighton in 2019. It was obvious at that point that they were going to smash that but they didn’t realise by quite how much. They kept going strong all the way to the end and sure enough, the pair crossed the line together to pick up a joint win. 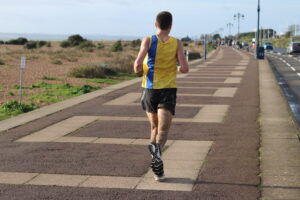 The time they’d done it in was a quite incredible 2:39:46. It was a truly fantastic run from both of them and they had easily surpassed their expectations. It was a memorable experience and Stu was even surprised himself by what he’d been able to produce.

Sub 2:40 had been the target he had in mind for the Brighton Marathon in the Spring but he may need to reassess that goal now since he’d already now gone sub 2:40 on a potentially tougher course.

There was another pair of runners going very well who weren’t too far behind Rob and Stu and they were Ben Holmes and Nigel Donaghy. Ben took 3rd place in 2:42:13 with Nigel finishing 4th in 2:42:20. Then it was Phil Avery flying round in 2:46:36 to seal 5th position in the overall standings. 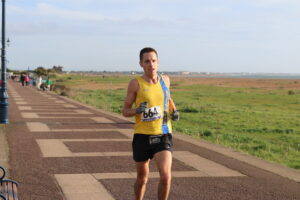 Bernadette Versey of Lordshill Road Runners took the title of first female, getting round in 3:03:31 which put her in 9th place overall. Susan Duncan of Weston AC was the next woman to arrive at the finish, crossing the line in 3:07:52, just ahead of Jo-Anne Credland who registered a time of 3:08:16. They finished 14th and 15th in the overall standings. A total of 573 runners successfully completed the course.

It had been a truly remarkable achievement from Stu and it was certainly a great way to end his 2021 campaign. With an average pace of 6:07 minutes per mile, it would surely have to go down as one of his best ever runs. In fact, it probably was the best performance he’d produced to date – and that’s saying something!!

Sometimes it can be amazing what you are capable of if you really push the boundaries and that’s exactly what Stu did on this occasion. He felt good on the day, rolled with it and came away with the result of his dreams. What more could you ask for in your 66th marathon?