Stu Nicholas scurries through first ever 100k at RAT Plague

What usually springs to mind when you think of The Plague? The devastating worldwide pandemic that wiped out a huge percentage of the population between 1347 and 1351 perhaps? The lethal disease they called the Black Death was introduced to humans by fleas that were carried by rats and other ground rodents.

In this case though, it was something not quite as profound, but almost as terrifying. Organised by MudCrew Ltd, the Roseland August Trail Race Series (The RAT) featured, as it’s showpiece event, the 100k whopper along the South West Coast Path of Cornwall they call The Plague.

With the route incorporating over 12,000ft of elevation, it is most certainly not a race to be taken lightly. In fact, as far as 100k races go, this would have to go down as one of the most brutal out there.

Plus, with the race starting out a 12:05am in pitch black surroundings, the difficulty level increases tenfold as the runners have to navigate there way over the tough coastal terrain with only a head torch to guide them for a large part of the race, with no light emerging until sunrise some six-or-so hours in.

Surely no one would be mad enough to do that for their first ever stab at the distance would they?… Step forward Stu Nicholas.

Now, Stu doesn’t tend to do things by half measures. Last year he completed no less than 14 marathons over the course of the 12 months to see him reach the unassuming landmark of 50 marathons. They included some back-to-back ones over the same weekend and many uniquely tough and intriguing challenges.

Earlier this year he completed the Enigma Quadzilla, which consisted of four marathons in four days. That was an event he ended up finishing as the joint winner.

Despite all those achievements though, the Plague was going to be a different kettle of fish altogether. It would undoubtedly take him to knew levels of suffering and force him perhaps to dig deeper than he ever has before to achieve his goal. And for this particular race, there was only one clear goal, and that was to complete it. By any means necessary. Actually that’s not strictly true, there’s only one means he’ll be using, and that’s running.

The race started off from Porthpean Outdoor Education Centre, which is quite near St Austell, where Stu is originally from. MudCrew had set up a camp site there for the runners to relax in before and after the event. 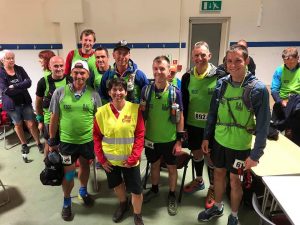 The Plague was an out-and-back route, so it was basically 50k along the South West Coast Path in a south-westerly direction heading toward Falmouth. The turning point was just after Bohortha.

The way it’s organised is quite good though as there are four different distance races in the event, with 32 miler (Black), a 20 miler (Red) and an 11 miler (White) all starting at different times, from fixed points along the same route. Therefore, when the plague runners are on their way back, they will encounter batches of other runners along the way who are competing in the race of whichever distance they chose.

Seeded as one of the top contenders, Stu got to start near the front which was a bonus. Or rather it would have been, except that a group consisting of the first 20 or so runners took a wrong turn through the village of Porthpean and ended up having to double back on themselves and filter into the main field. 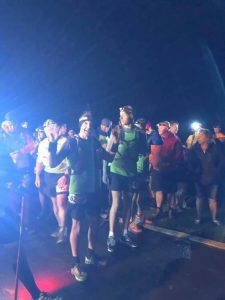 As a result, Stu ended up in the last quarter of the field and ended up reaching the first checkpoint with only 20 minutes to spare. It was a less than ideal start to the proceedings for Stu.

He spent the rest of the night gradually catching his fellow competitors and overtaking them where possible.

Come dawn, he was 28 miles in, so only had four left until the turning point. He was still working his way up the field and going past people who had set off too fast. In fact, it could even have been a blessing that he went to wrong way at the start and got slowed down as a result. 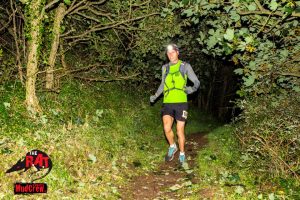 Embarking upon his journey just after midnight, Stu knew he would be running a substantial part of it in the dark

As if the starting at night, the extreme distance and the testing terrain didn’t make it tough enough, there was also a 50mph wind for Stu to contend with. That was a headwind for the way out but then once he hit turning point, it would be a tailwind for the way back which was a blessing.

The first five miles and the last five miles were the most brutal parts of the entire course, with over 500 coast path steps to deal with on top of the seismic elevation.

On the way back, Stu hardly saw any other 64 milers, aside from Charlie Ramsdale, a lady who he was yoyoing with for quite a bit of it. Eventually, by virtue of his lanky legs, Stu was able to pull away from Charlie over the last few miles.

That sealed a top five finish for Stu which was a terrific result considering it was his first ever 100k. Completing the course in a stellar time of 13 hours 33 minutes and 17 seconds, it was a performance he could be extremely proud of. 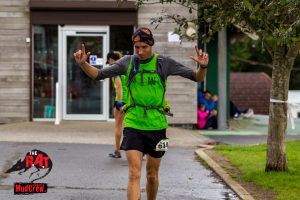 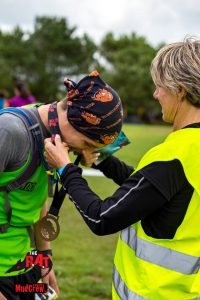 Only 91 of the 140 people who entered the Plague actually completed the full 64 miles which gives a good indication of how tough the course actually was.

Stu wasn’t the only one in his household who was in action at the Roseland August Trail event though. His partner Anna Trehane was also in action, making a massive step up in distance to complete the Black race, with was 32 miles. 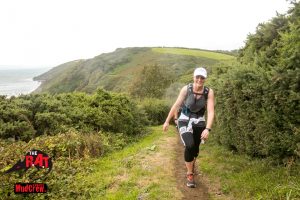 Managing to complete that in a time of 7 hours 56 minutes and 33 seconds, Anna ran very well to place 94th out of 215 finishers and she was the 28th female over the line. 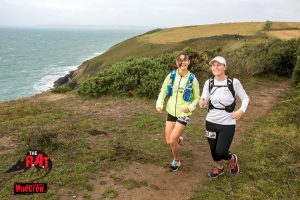 Anna’s sister Katherine also ran, getting over the line in 7:09:11 which put her in 52nd place overall and made her 10th lady over the distance. 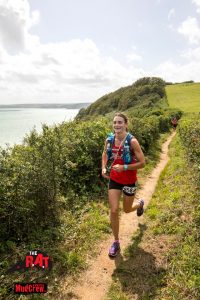 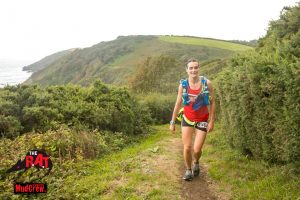 It was certainly a weekend to remember for Stu, Anna and Katherine and one that, once the recollection of the pain and suffering they went through begins to subside, they’ll look back on extremely fondly and with immense pride. 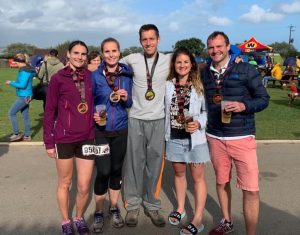 It was a proud moment for Stu, Anna and Katherine as they stood with their medals after a monumental effort from each of them