Success for Stu and Heather at North Dorset Village Marathon 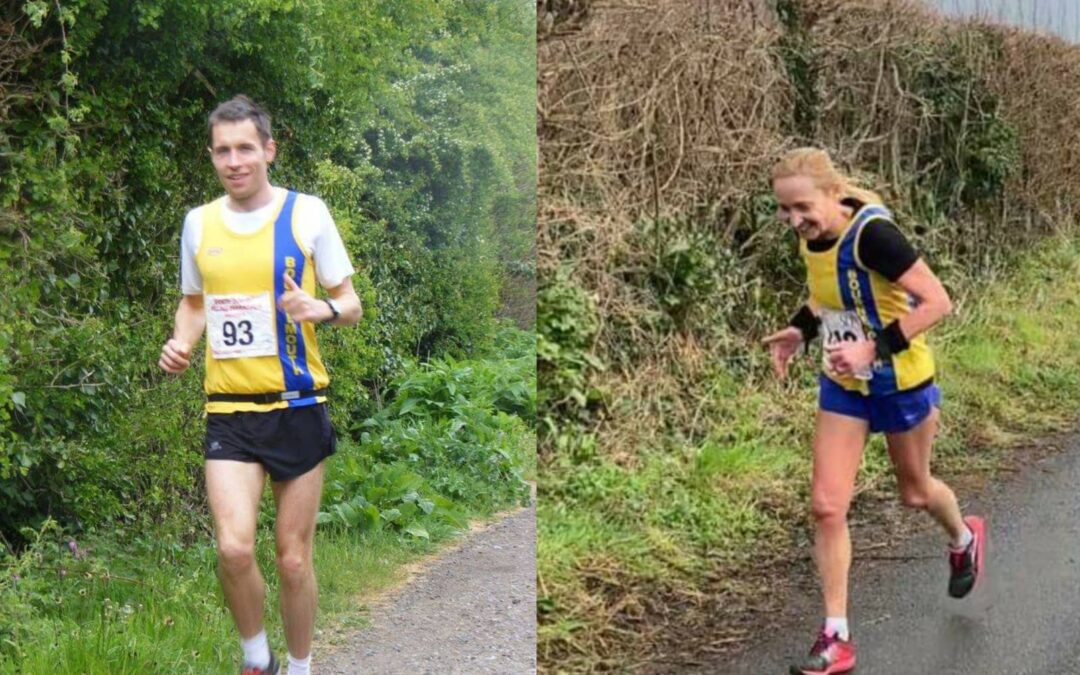 Usually tending to be one of the trickier races on the Dorset Road Race League roster to get a team out in, Bournemouth AC were destined to lose out on yet another fixture. With only Stuart Nicholas in action for the men and Heather Khoshnevis for the ladies, there was never any real prospect of making any gains in the league standings.

There was still a chance of individual glory for the two representatives concerned though. Stu’s marathon running is exemplary and after securing a new PB of 2:37:31 in the Brighton Marathon, there were surely very few men in the local area who could match him over the 26.2 mile distance.

As for Heather, she usually contends for top age category honours in the majority of races she does and she’s already looking like she’s got top spot in her Dorset Road Race League age group tied up. Would she be able to do it again though at the North Dorset Village Marathon.

The race doubles up as the Dorset County Championships for the marathon distance as well, so there added pressure to it, with Country Championship medals up for grabs.

It’s by no means a flat course though and includes its fair share of lumps and bumps. That didn’t really worry Stu or Heather though. Both veterans of many a marathon, they had been through worse weather that’s for sure.

As well as the marathon, there was also a relay where runners can compete as part of a team of four, covering the marathon distance between them over the four legs.

When the race got underway, Stu set off with the front runners from the relay. The difference was though he was doing the full marathon whereas they were only doing 7.2 miles and then handing over to the next person.

For the first eight miles Stu was going at around 6 minutes per mile or under. On the ninth mile there was a bit of a climb though and then another one on the tenth mile. In fact, it was all fairly undulating up until mile 14.

Once he was back on flat ground, Stu was back to under 6 minutes per mile again which was an impressive show of strength. On the 17th mile, the first relay team overtook him. That says a lot about Stu’s marathon running ability though, the fact that even all the relay teams had been behind him. He hadn’t been overexerting himself either though and had been conversing with the marshals on the lead bike for most of it.

On mile 20 there was a fairly big climb, followed by another one on the 21st mile. Then it was back on pace for Stu for the next few miles before hitting the 25th mile which contained another climb.

Taking everything in his stride though, the fitness from the Brighton Marathon got him through and Stu sailed in for a serene victory. Hitting the tape in a tremendous time of 2 hours 40 minutes and 30 seconds, it had indeed been another marathon masterclass. His average pace for the run was a very impressive 6:06 minutes per mile. 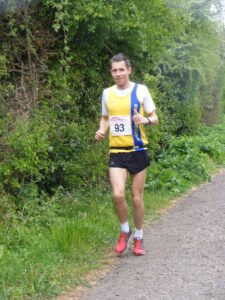 Just over four minutes had gone by by the time Martyn Bell arrived to finish as runner up in 2:44:42. He was the first of four Egdon Heath Harriers men in the top five, which was an impressive show of dominance as far as the Dorset Road Race League goes.

Damian Huntingford had a decent run to come in in 8th place for Wimborne AC, registering a time of 2:49:22. Paul Russhard of Lymington Tri Club was the last man to get in in under 2:50, crossing the line in 2:49:22.

Edward Crawley gave Lytchett Manor Striders their first finisher, coming in in 10th place in a time of 2:50:31. Twemlow man Jack Galloway was next to arrive at the finish, taking 11th place in 2:51:37.

Wimborne man Lorenzo Bianchi had a decent run to claim 17th place in 2:56:16 before Bruce Campbell rolled in to complete Egdon Heath Harriers’ scoring team of five. He was first M50 as well, registering a time of 2:56:27.

That of course gave Egdon Heath Harriers their fifth win in five races, taking them to within two wins of sealing the men’s first division title. Lytchett Manor Striders had a decent showing in 2nd place for the fixture, with Poole Runners in 3rd and Littledown Harriers in 4th.

Having not done any marathons for eight months, which is a long time for her, Heather Khoshnevis was a bit apprehensive about North Dorset. She did make sure she got some long runs in beforehand but it still felt a bit alien and a bit like she was entering into the unknown.

Once she got going though she felt pretty good and managed to get to the half way point in 1 hour 42 minutes. At that time she calculated a possible 3:34 finish, adding on an extra 10 minutes for the second half. That have been a good time for Heather though and certainly better than what she had envisaged. 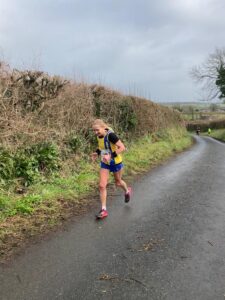 As the miles ticked by, she continued to go well and wasn’t really losing any time verses her splits in the first half. She then started to think that may go sub 3:30 as she was still under 8 minutes per mile. Unfortunately the last three miles got her though and she started slowing down.

That culminated into a 3:34:26 finish, which put Heather in 76th place overall and made her 6th lady over the line. She was also first female over 60 and in fact, there wasn’t even any woman over 50 who finished ahead of her.

She was very surprised to still get that time after faltering a bit towards the end and she was even more surprised to find that she’d beaten her previous best North Dorset Village Marathon time by 44 seconds.

The first female prize went to Daisy Baker of Millfield Tri Club and she finished in 31st place overall in a time of 3:04:50. Since she wasn’t running for a Dorset Road Race League club though, it was a battle between Tracy Cook of Dorset Doddlers and Alex Door of Egdon Heath Harriers for minimum points.

Alex had been in front up until 25 miles but Tracy caught her up and went past her before crossing the line in 3:15:05. That put her in 40th place overall. Alex was the next person over line, clocking a time of 3:15:27. Considering it was only a month since she did the Manchester Marathon, she’d done pretty well to pull another one out the bag so soon. 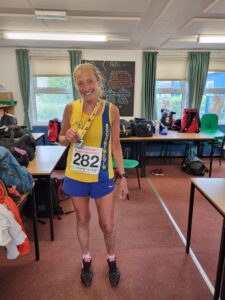 Louise Austin of Littledown Harriers was 3rd female, completing the course in 3:24:25 to take 58th place overall. That put her just ahead of Victoria Barnett of Egdon Heath Harriers who was next to arrive a the finish in 3:24:48.

In terms of the overall club picture in the ladies’ first division it was Egdon Heath Harriers who won the fixture, with Littledown Harriers taking 2nd and Lytchett Manor Striders 3rd.

That strengthened Egdon Heath Harriers foothold at the top of the division with five matches played. Littledown Harriers and Poole Runners were pretty closely matched in 2nd and 3rd positions in the standings thus far.

The result had strengthened Heather’s position at the top of the female 60-64 category and her lead in that is already looking unassailable. The win for Stu put him up to 6th place in the rankings for overall male and 2nd in the 30-34 category off the back of the three races he’s done so far.

Stu and Heather were both back running again pretty soon after North Dorset. Stu doesn’t like to rest for too long anyway and he was back coming first in parkrun the following weekend. Heather has the Dartmoor Discovery coming up in June, which is a 32 mile road race. Hence she’s trying to get as many miles in as she can in in preparation for that. 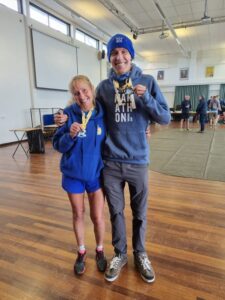