Summer Series ends on a White high for BAC three 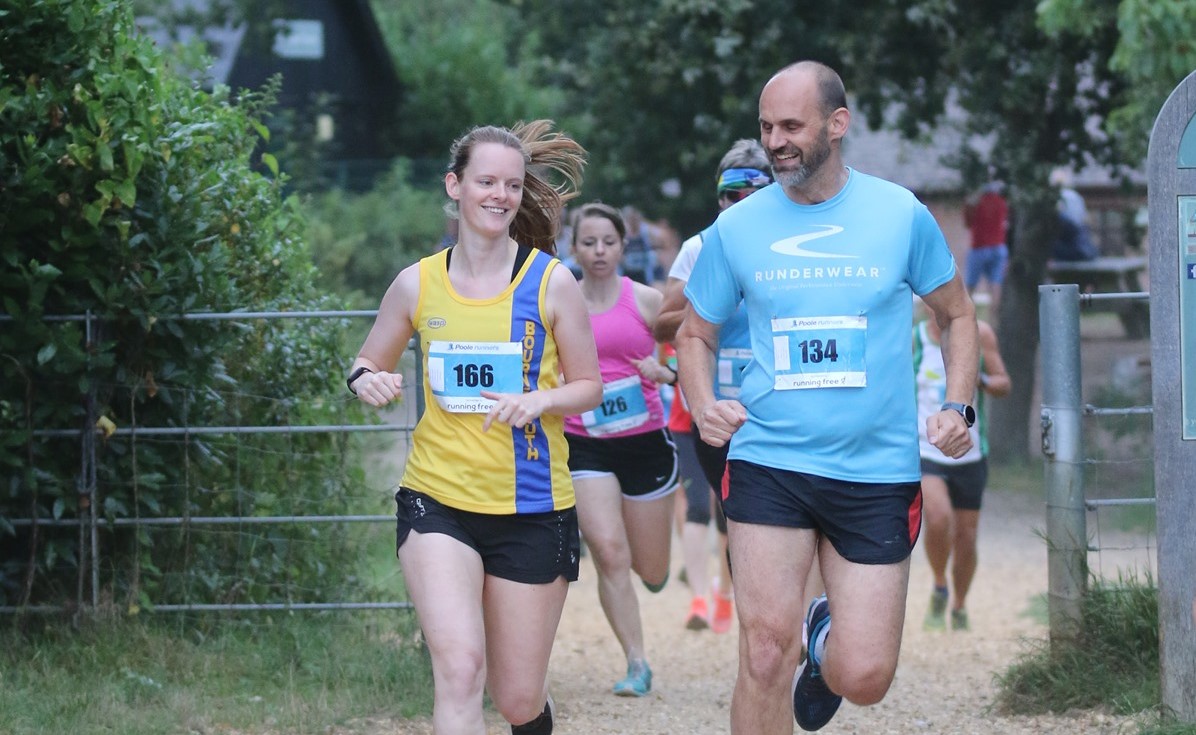 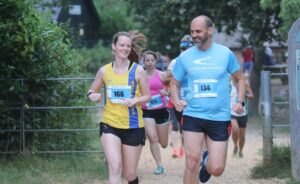 The final race of the six in the Upton Summer Series presented the athletes with one final chance to either secure their place on the final scoreboard, or improve upon or consolidate their position.

After the first four fixtures, Katrina White was 4th female in the standings and was leading the 18-39 category. Following the culmination of the fifth fixture though, she’d slipped down to fourth in the category.

Charlotte Bunch of Poole Runners had assumed pole position after her 2nd place finish and Siabham Gorman was in 2nd. It was tight between Hailey Higgins and Katrina but Hailey was just edging it for 3rd.

The opportunity was there for Katrina in the sixth race though to improve her overall score. Anything above a 9th place finish for the age category would do that.

Having done three fixtures thus far, husband and wife Ian White and Sam White had the chance to get their fourth attempt in and register their names on the overall leader-board for the series. 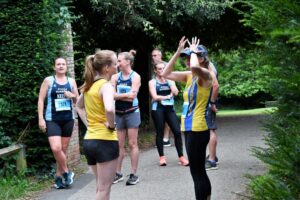 Ian’s main aim for the series was to finish in under 26 minutes and he managed that in Race 2 when he clocked a time of 25:41. Instead of having another crack at a sub-26 though, he opted to run with his daughter Katrina to see if he could help her improve on her position.

As for Sam, she’d finished in 29:51 on both of the first two races and that was her quickest time thus far so she was looking for an improvement on that. 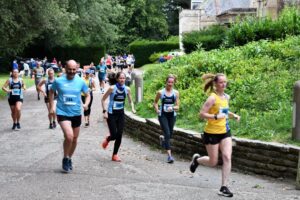 Katrina’s best time thus far was the 26:50 that she posted in Race 3. She’d been making some good incremental improvements over the first three races though so it would be interesting to see if she could go even faster on her final attempt.

It was much cooler on the day than it has been for the previous races so it was a great opportunity for the athletes to record a new best time if they could find their form. Katrina did just that. 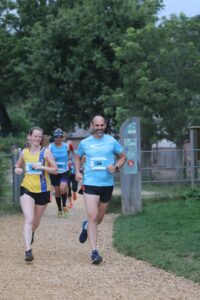 Running alongside Ian, she got through the first mile in a very quick 7:10, so she’d really got out of the traps well. In fact Katrina was running so well that it was forcing Ian to work quite hard himself just to keep up!

Finishing in an incredibly impressive time of 26:16, Ian and Katrina took 51st and 52nd in the overall standings. Katrina was 9th fastest female 5th in the 18-39 category, so she had improved her final score by four points. Ian was 6th in the Male 50-54 category. 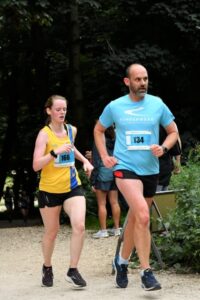 Taking 34 seconds off her previous best time was quite some achievement for Katrina though and even she wasn’t expecting to pull such a great performance out of the bag.

She wasn’t the only one either. Sam also ran significantly quicker than she had in any of her previous attempts to finish in a magnificent time of 29:05. 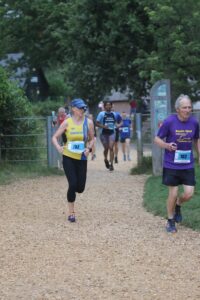 That was actually a pretty consistent paced run considering the first mile contains more downhill. The last half a mile includes an incline so she did well the finish strongly on that. 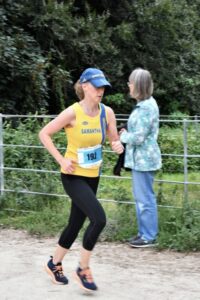 That put Sam in 86th place overall and she 26th placed female. In the 50-54 category, she was 5th. It was a very pleasing run for her and she treated herself to a McDonald’s afterwards to celebrate.

Having already wrapped up the series with four wins out of five, Matt Brown decided to let someone else have a chance to taste victory in the sixth and final race. 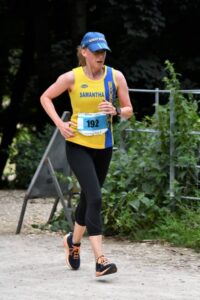 That opportunity was snapped up by Dion Garner of Poole Runners who got round in 19 minutes 23 seconds. That was just enough to edge him in front of Brian Underwood of Poole AC who crossed the line in 19:44.

Lewis Clarke of Lonely Goat took 3rd place in a time of 19:47 which out him 2 seconds ahead of Duncan Cooper who was 4th in 19:49. Tom Andrews of Lytchett Manor Striders was a specialist in finishing 4th but on this occasion he had to settle for 5th place, crossing the line in a time of 20:03.

Out of the women, Fern Kimber was 1st finisher, crossing the line in 21.19. That put her in 12th place overall out of the 159 who successfully completed the race.

That also meant that Fern had won the series, after finishing 1st female in all four races she took part in. Kate Wilkinson of Poole Runners was the next woman in, taking 29th place overall with her time of 23:39.

That put her just ahead of Charlotte Bunch who was 30th and 3rd lady, posting a time of 23:49. In the series though, taking the best four results, it was Charlotte who finished 2nd to Fern, with Kate taking 3rd.

Joanna Westhead, also of Poole Runners was 4th in the series and 1st in the Female 45-49 category. Then it was Sophie Watton of Wimborne AC in 5th.

Katrina finished 12th female and 5th in the 18-39 category, just behind Siobham Gorman and just ahead of Hayley Higgins. The way she ran throughout the series and the results she accrued had perhaps even surprised Katrina herself.  She’ll certainly come out of the series with a lot more confidence than she had when she went into it. 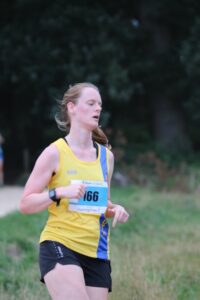 Sam finished 37th female for the series and 6th in the 50-54 category. That was a decent outcome for Sam and she was certainly boosted by the run she had in the final race.

Ian was 65th in the overall standings and 7th in the series for the Male 50-54 category. That represented a pretty good effort from him, all things considered. 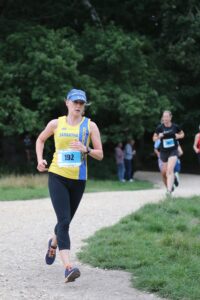 Having only done three of the races, Nikki Whittaker was knocked down the pecking order, finishing in 90th place in the end. Her partner Rob McTaggart was the only other BAC member to feature but he only did two of the races. He did finish 1st and 2nd in them though.

As previously mentioned, with four wins, Matt Brown swept to an impressive series victory. Lewis Clarker finished as runner up with three 3rd places and a 5th place. 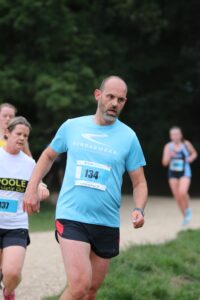 In the teams competition, Poole AC won the men’s, being the highest scorers in four of the fixtures. Then it was Poole Runners, just edging out Lytchett Manor Striders and Littledown Harriers.

In the women’s team competition, Poole Runners were the victors, securing five wins and a 2nd place from the six fixtures. Poole AC were 2nd, securing five 2nd places and one win. Then it was Bournemouth Joggers in 3rd.

It was great to see the Summer Series go ahead and with a full program of fixtures completed. The competitive spirit generated by an ongoing league type of format is certainly one that has been missing from running for quite some time now.

Hopefully it won’t be long before the Dorset Road Race League is back on the horizon, along with the Hampshire League Cross Country which has already been penciled in. With those competitions taking place, there should be some exciting times ahead for the Dorset running community.