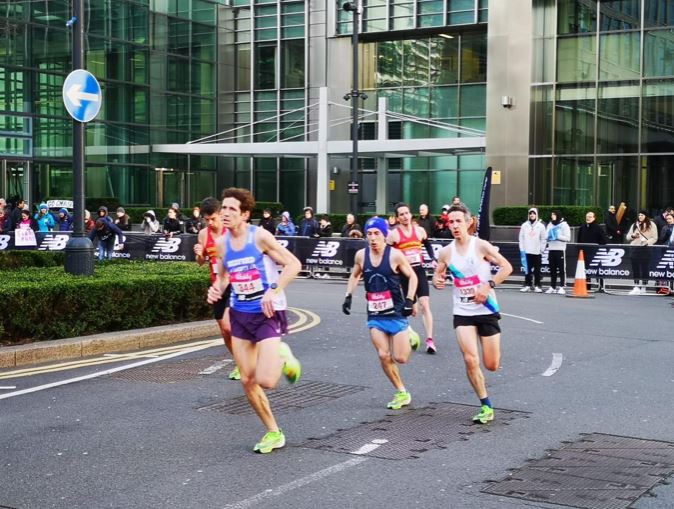 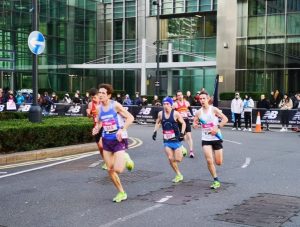 Having securing a new PB in both previous years of the Big Half Marathon, Rob McTaggart returned to London to see if he could make it three in succession.

He’d certainly made it hard for himself this year after recording his first ever sub-69-minute time at the Cardiff Half Marathon in October. That time of 68:56 was going to take some beating.

Tag always seems to do well in the Big Half though so it certainly wasn’t out of the question that he could come up trumps again. He’s been hitting some big mileage in training, consistently churning out close to 100 mile weeks in preparation for London and the signs suggested he was in good form.

Running a 31:45 at Chichester the previous month would have served as a big confidence booster, especially since he didn’t feel completely on top of his game that day.

Before he did the Telford 10k in December, Tag had struggled to hit the sub-32-minute mark for quite some time, so to do it twice in succession was a clear sign of progression.

This year Tag was joined in the race by his Bournemouth AC teammate Ant Clark, along with several others from the Twemlow Track Club brigade.

Following a long lay off after contracting Epstein Barr Virus last summer, Ant has had to ease himself back into running, slowly but surely, and is now beginning to come back into some really good form.

Finishing the Blackmore Vale Half Marathon in 77:25, Ant surprised himself in finding that he’s not actually in bad shape at all. Ever since then he’d been wracking up the miles in training and has been going at a very good pace in some of his longer training runs which suggest his fitness is getting back to something close to where it was.

But what kind of performance could he deliver in his first really big race since recovering from the illness? That was the question.

The course for the Vitality Big Half is quite similar to much of the London Marathon route, only it’s in reverse, so it starts off at Tower Bridge and finishes at the Cutty Sark. The course passes through the boroughs of Southwark, Tower Hamlets, Lewisham and Greenwich.

The day didn’t get off to an ideal start for Tag though after he waited 45 minutes for a train to turn up at Richmond Station. That left him just 29 minutes to run to the Championship area, dump his bag and get in the start pen. Thankfully he just about made it in time though and set off on his way.

As usual, the field was brimming with talent and this year included one of the world’s fastest distance runners in Kenenisa Bekele of Ethiopia. He ran the Berlin Marathon just two seconds slower than Eliud Kipchoge’s world record so is expected to challenge the Kenyan all the way in the London Marathon this year.

Marius Kipserem of Kenya was also in the line up along with Chris Thompson who looked like he could be the main challenger from the British perspective.

There also were some top British ladies hoping to take out the women’s win including Lily Partidge, Samantha Harrison and Stephanie Davis.

In last year’s race, Tag ended up running alongside Steph Twell for the vast majority of the race. She was the leading woman at the time which meant he got a lot of air time of TV, along with his BAC teammate Craig Palmer.

In this year’s race it was Samantha Harrison who took the race by the scruff of the neck in the early stages and there was a point where Tag was running alongside her which meant, once again, he made it onto BBC red button coverage. 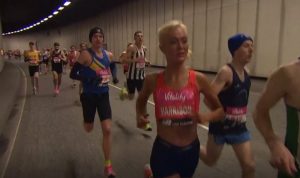 The pace Samantha was going at wasn’t quite what Tag had in mind though so after the first couple of miles, he began to push on and move through the gears. 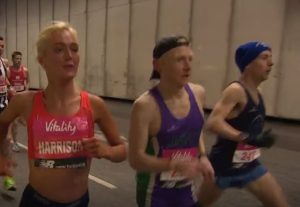 Then, on the ninth mile he decided it was time to leave that group and go it alone. That meant he was in for a tough last five miles and the blustery conditions made it very hard graft for him out there on his own.

After finishing the race, he was promptly sick, which just goes to show how much he put into it.

Just as he did last year, Tag had come in in 41st place, which wasn’t bad at all in a field of over 22,000 runners. It was 27 seconds quicker than his time in the Cardiff Half Marathon so he was over the moon with that. 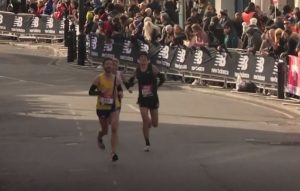 The BBC cameras caught him heading down the finishing straight as he was coming in at around the same time as Jenny Spink who was the 8th placed lady.

Clocking a time of 1:14:10, Ant finished in 161st place overall. That was his third fastest half marathon time so it was a cracking result and a real boost for him to know he’s getting back to something close to his best form. 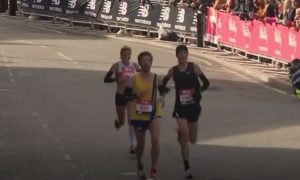 Kenenisa Bekele picked up a convincing win in the end, setting a new course record of 1:00:22. A very gutsy performance from Chris Thompson saw him attack aggressively from the outset and go head-to-head with Bekele. He ultimately had a settle for second place though, finishing in 1:01:07.

In the women’s race, Samantha Harrison was out front for a substantial part of the race but Lily Partridge caught her up in the end and proved to be the stronger of the two, taking out the victory in a time of 1:10:50. Samantha took 2nd place 1:11:01 with Stephanie Davis arriving shortly after to seal 3rd in 1:11:15. 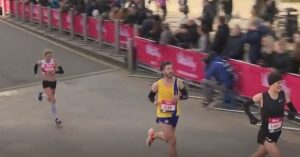 Both Ant and Tag will be feeling optimistic about their prospects in the London Marathon and other races going forward after their Big Half runs.

Although he was very pleased with his time, on a perfect day and with perfect conditions, Tag feels sure he has an even faster half marathon time in his locker. 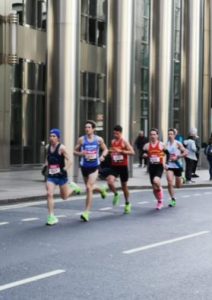