Tag and Szymon rip round Reading Half Marathon 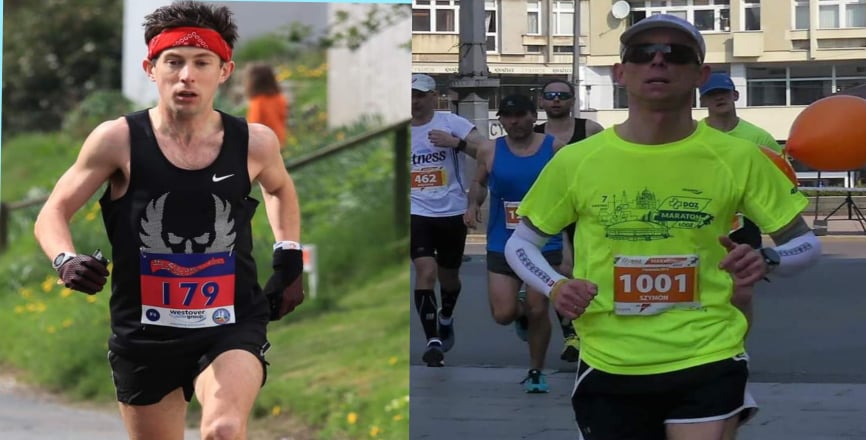 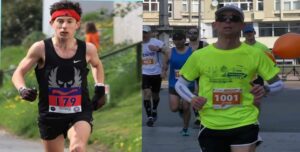 With a highly competitive field ready to do battle over a fast and furious road route round the town, the Reading Half Marathon looked a decent prospect of a good time for any in-form athletes.

Two of Bournemouth AC‘s top tier talents were amongst the 6,000 plus runners looking to reach their potential and make their mark in the big showdown.

They were of course, none other than one the fastest half marathon runners in the club, Mr Rob McTaggart, and the effervescent new kid on the block, Szymon Chojnacki.

Both men had been showing signs of good form coming into the race, with Szymon stealing the show in the Run Bournemouth Supersonic 10k, racing to a 34:38 time to seal the victory.

Then the weekend after that he picked up another win in the 303 Squadron Memorial Run 5k in Feltham.

A blistering battle between Dom Willmore of Poole AC and Scott Cousins of Springfield Striders left Rob McTaggart with a lonely lollop round for 3rd place in the Run Bournemouth Half Marathon.

Dom and Scott ended up pushing each other to incredible times of 1:07:30 and 1:07:40 respectively leaving Tag trailing by some distance. Once he knew he’d have to settle for 3rd, he was able to take his foot of the gas and save his legs for the Great South Run the week after though.

Despite that, he still registered a very quick time of 1:11:49, demonstrating that he was very much in line for a fast time in the right set of circumstances. He was hoping the Reading Half Marathon would present him with the scope to do that.

The following weekend he ran a time of 53:44 in the Great South Run to take 32nd place. He didn’t really feel he had a good run on the day though and knew that with his current level of fitness, he should have been able to go faster.

The Reading Half Marathon route featured a grandstand finish at the Madejski Stadium – home to Reading Football Club – with the course taking in the University of the Reading, Prospect Park and Coley Recreation Ground. It also took the runners past Reading Train Station and Reading West.

The first mile was a very quick one, with Tag getting through it in just 5 minutes and 5 seconds. After that it was a slight incline for the second mile before hitting a steeper curve in the third mile. 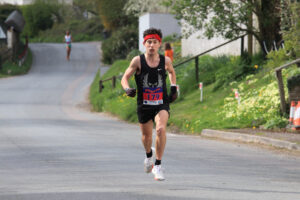 Tag ended up running virtually the whole race on his own

Sometimes the way a race pans out can hinge on one split-second decision. Tag had been running with a group but when he hit the hill on the third mile, he elected to ease off a touch and let the group go ahead.

Aware that hills aren’t really his strong point, he didn’t want to risk putting himself into the red so early and having to suffer for the remainder of the race.

What happened though was that wasn’t able to catch the group back up afterwards and ended up in no man’s land again. Without anyone to push him on, Tag struggled to find the intensity and slipped off the pace he might otherwise have hoped to maintain.

He ran really well over the last few miles though and managed to reel in and overtake four other runners before getting to the line in a time in a mightily impressive time of 1:10:48. 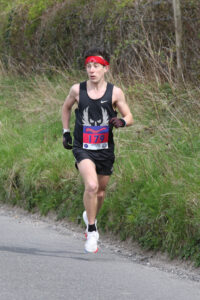 That put him in 28th place overall and although he would have liked to have gotten closer to his PB time of 1:08:29, it wasn’t really the right course for that.

It was a very good performance though, nonetheless and represented great progress from the form he was in over the summer when he was really struggling to find top gear.

Szymon opened with a ferociously fast first mile at 5:32 pace. He was then looking at a speed of around 5:45 to 5:50 for the next six miles, except for the third mile that had the steeper part of the incline. 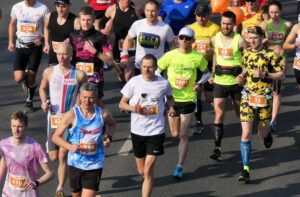 The ninth mile also had a bit of an incline so that was slightly slower but the rest of the remaining miles were done at around 6 minute mile pace which was still very strong from Szymon.

That culminated in a magnificent finishing time of 1:17:15 which put him in 89th place. Given the standard of the opposition he was up against, that was a pretty good result for Szymon.

His fastest half marathon though was Ranelagh Richmond which he completed in 1:15:25 so that was the sort of time he was aiming for. On a course that wasn’t completely flat though, it was one of those where Szymon should still feel proud of what he’d achieved whilst knowing that there’s still scope for improvement. 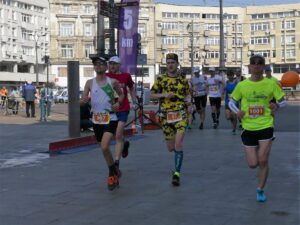 Twemlow Track Club man Richard Swindlehurst was also competing and he had a decent run to finish in a time of 1:17:48, which put him in 103rd place.

It was Omar Ahmed who picked up the win in an astonishing time of 1:02:14. He was the man who just managed to get the better of Grant Sheldon in the Speedway 10k in the summer.

Alex Tueten of Southampton finished in 7th place, getting over the line in 1:06:25. Phillipa Bowden was top woman, completing the course in 1:13:29.

The fact that both Tag and Szymon, despite running such quick times, can still be disappointed with their end results illustrates the high standards that they set for themselves. And that’s probably partly why they are where they are in running terms. They are always striving for better and never settling for anything less than the best that they can possibly be.

Next up for Tag, he would be back on more familiar ground, looking to bring home the bacon in the Wimborne 10.

As for Szymon, he would be in action in the first Hampshire Cross Country League fixture of the season at Kings Park before heading back to Poland for the Łódzkie Mountain Run 10.5km.