Tag tears up Cardiff Half Marathon with triple PB display 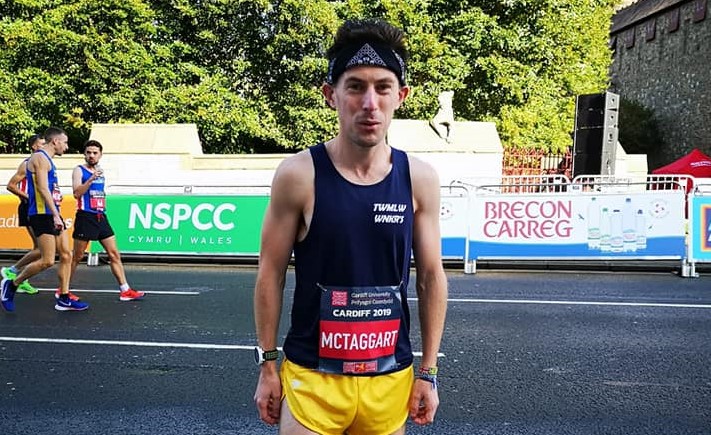 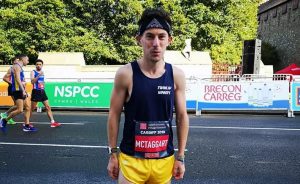 The Cardiff Half Marathon is practically engineered to be a platform for fast runners to excel. And, on his day, they don’t come much faster than Rob McTaggart. He’s certainly more than capable of mixing it with some of the best runners in the UK when he’s at his best.

The main problem with Tag is, you can’t always predict when it is going to be his day. When it is though, you certainly know about it. He had high hopes that he could produce something special at the Cardiff Half Marathon and was looking in great shape going into it.

The previous month he nailed his first ever sub-32-minute 10k, on the track at the Ladywell 10,000m. And he actually did it with time to spare as well finishing in 31:29.

Then at the Lytchett Relays he knocked out the second fastest lap of any of runners, getting round the 5k loop in 15:53. It was only Craig Palmer that could better that in a very star-studded field.

The Cardiff Half Marathon event was launched in 2003 when 1,500 runners took part. It has grown significantly since then, now attracting a field of over 27,500 runners alongside some world-class athletes.

As well as being Wales’ largest mass participation and multi-charity fundraising event, it is part of a global series of SuperHalfs, which are considered to be the world’s most prestigious half marathon races. The others are Lisbon, Prague, Copenhagen and Valencia.

The route starts off outside Cardiff Castle and heads in the direction of Penarth, passing the Principality and Cardiff City Stadiums along the way. It then takes the runners through Penarth Marina before heading to Cardiff Bay where the Millenium Stadium is one of the famous landmarks in view.

After that it’s over the northern region of the city, with a loop of Roath Park Lake on the agenda before the grandstand finish at the Civic Centre, right in the heart of the city. 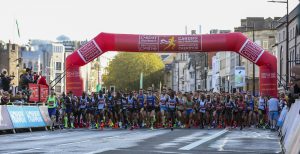 When the race got underway, Tag blasted off the blocks, getting rather swept up in all the excitement. That resulted in him going far too quickly for the first five miles.

He didn’t blow up though and managed to stay strong, passing the 10k point in an incredible 32:04, which for him would have been a road 10k PB. For the last 8 miles of the race Tag had found himself towing round a Welsh lad and a couple of African ladies. 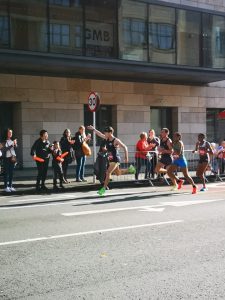 Despite that though, he continued to push hard and hit the 10-mile point in 52:17. That would have been another PB for Tag had this been a 10-mile race. But it wasn’t of course. He still had 5k left to go.

It didn’t matter though as Tag was still flying at that stage and he had enough in the tank to see him through to the end. Crossing the line in an astonishing time of 1:08:56, Tag had recorded a barn-storming PB that sent shockwaves through Dorset running circles back home. 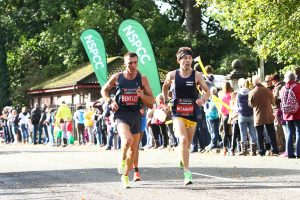 It was only the second time ever that Tag had gone sub-70 for a half marathon, after managing it in the Vitality Big Half Marathon in March this year. That was a fine performance but this time he’d somehow managed to chalk another minute off that!

That time put Tag in 27th place in the overall standings. That was in a field where the top ten places were all taken by elite African distance runners who were some of the quickest in the world. 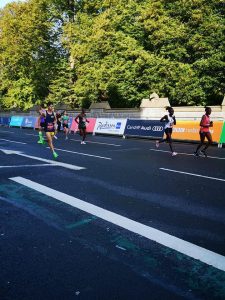 It was a run that would see Tag eclipse his previous best times for 10k, 10 miles and half marathon

The first four world class African female competitors also finished ahead of Tag, but not by much. Lucy Cheruiyot of Kenya was 1st lady finishing in a time of 1:08:20. She was just in front of Azmera Abreha of Ethiopia who was given the same time. They were placed 21st and 22nd overall. 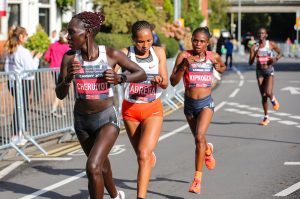 If you take all the African professionals out of the equation, Tag was 13th quickest in the field, and that was a huge achievement when the standard at the front end of the field was so high.

Overall there were 20,257 runners who took part in the race with a diverse range of ages, abilities, shapes and sizes amongst them. There were even several competitors out there in fancy dress and many raising money for various charities and worthy causes. 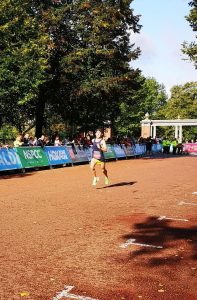 Kenyan Leonard Langat picked up the win in the end, setting a terrific new course record of 59:30. He had a put in a sprint finish at the end to outdo Shadrack Kimining who was 2nd in 59:32.

The top Brit in the race was Mohamud Aadan of Thames Valley Harriers who got over the line in 1:04:15. He was followed by Peter Le’Grice of Bristol and West in 1:04:21 and Charlie Hulson of Liverpool Harriers in 1:04:28. 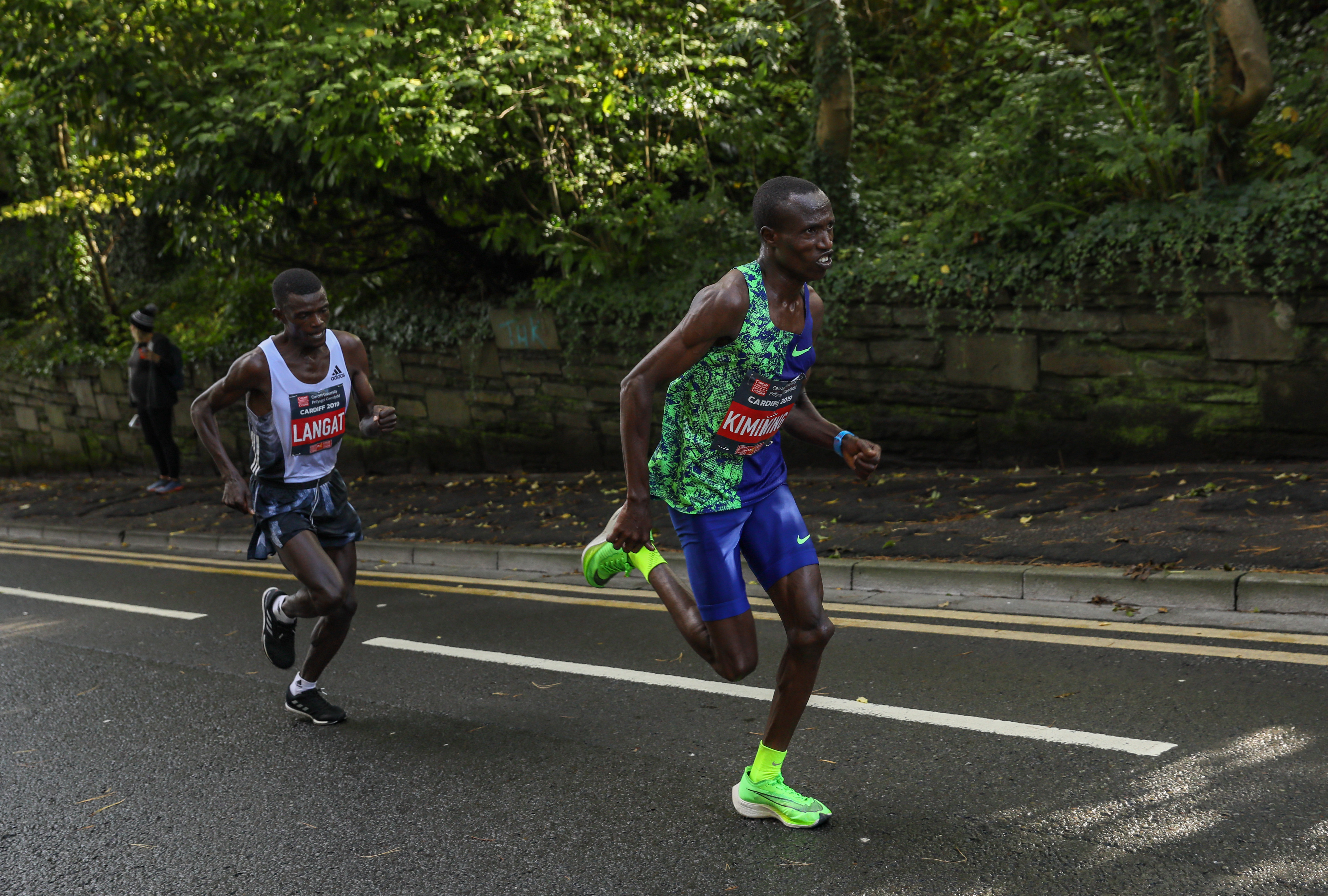 For Tag though, it was a momentous race and one that he’ll no doubt look back on fondly for many years to come. To secure 10k, 10-mile and half marathon PBs all in the space of one race was something rather special, especially when those PBs are as quick as Tag’s are.

That doesn’t mean he doesn’t have the potential to go even faster though. On the right form and in the right surroundings, the sky’s the limit really for Tag. 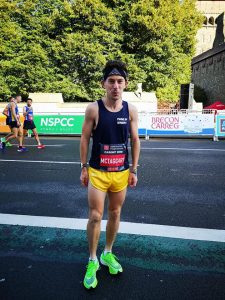 Finishing in a time of 1:08:56, it was a result that Tag could be immensely proud of