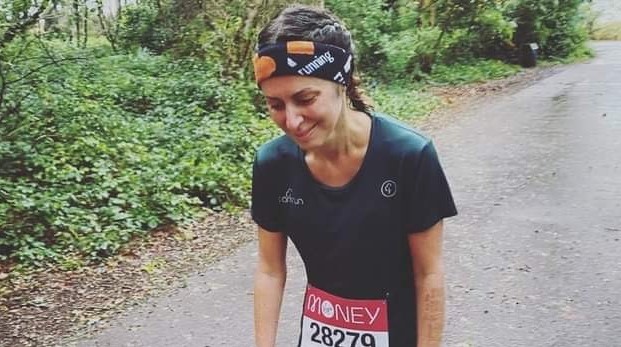 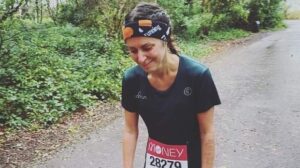 Way back when she first discovered she was the lucky recipient of the club ballot place for the London Marathon, Tamzin Petersen did not envisage she’d be doing the 2020 London Marathon in her own backyard, right here in Bournemouth.

A lot has changed though since her name was pulled out of the hat towards the end of 2019. It’s been a strange year and the topsy- turvy nature of living in the midst of a pandemic has provoked much uncertainty.

When the pandemic first struck and lockdown restrictions were announced, the London Marathon organisers duly moved the event to October, assuming it would safely be able to go ahead by then.

As infection rates continued to sore though and the true impact of the virus was beginning to take shape, it looked increasingly unlikely that the race would be able to take place, even on the rescheduled date.

After much delaying and deliberating, it was finally announced that the 40th London Marathon would be an elite only race, with others getting the opportunity to take part in a virtual race, at a location of their choosing.

That meant that instead of pounding the pavements in the streets of London with 44,000 others, runners would end up having to tackle the 26.2 miles on their own, without the thrills and spills that only a real race environment can provide.

Julian Oxborough had been wanting to the London Marathon for a few years now so when the opportunity came round to take part in the virtual one, he couldn’t turn it down.

Even though that meant doing a marathon with virtually no training, Julian was up for the challenge and was keen to earn his London Marathon medal.

Although she was technically running the marathon on her own, it probably actually turned out to be the most social marathon Tamzin has ever done.

She had many friends accompanying her on route, including fellow Bournemouth AC members Louise Price, Estelle Slatford, Mike White and Phil Cherrett.

Unfortunately, living in Somerset, Julian did not have that luxury. He had to undertake the entire run on his own. And as if running a marathon on your own with no training wasn’t going to be tough enough, he also had horrendous weather conditions to contend with.

That was the weekend that Storm Alex passed over the UK, unleashing copious amounts of rainfall and vivacious winds with strong and sporadic gusts. For Julian that meant a very wet run was in store and with a wind speed of 20 miles per hour, it was going to be a tough road ahead. 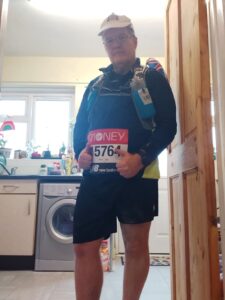 Julian and Tamzin weren’t the only Bournemouth AC members competing in the Virtual London Marathon that day. Rich Brawn and Sanjai Sharma were also taking part and they had entered the Dorney Lake Marathon which would provide them with the chance to do it in a race environment.

It would be Sanjai’s 27th London Marathon in total and his 19th consecutive one, which was an incredibly impressive tally. Rich had only done one before and that was April 2019, when he recorded his marathon PB of 2:55:23. 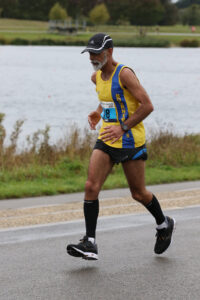 He kind of liked the idea of running one marathon but being in two different races so that was why he entered the Virtual London one as well as Dorney Lake.

He hadn’t realised that he would have to record his Virtual London Marathon on an app though so hadn’t anticipated bringing his phone with him when he ran.

Discovering it would be too heavy to take in the gel belt he was intending to use, he had to change the shorts he was going to wear to some that had a zip pocket big enough to put his phone in, as well as his gels and salt capsules.

That was a move that would later prove costly as the shorts got so wet that the salt capsules he’d brought with him seemed to disintegrate, leaving him at a greater risk of suffering cramp issues. 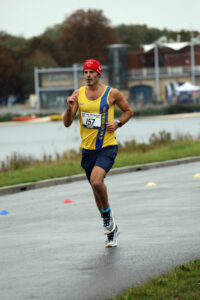 The advantage of doing her own virtual marathon for Tamzin was that, as well as having friends running sections of it with her, she could also select a route of her choosing. Therefore, she could dictate at which points in a run she had a headwind and at which points she’d have the wind assisting her.

With the weather conditions as they were that day, those decisions could well prove crucial to her getting the best possible time she could.

For Tamzin, the aim really was to go sub-four-hours. That was something she’d attempted a couple of times before, once at the Bournemouth Marathon Festival and once at Edinburgh. Although she did produce good times on both occasions, she missed out on the sub-four she craved, so this year’s Virtual London gave her the opportunity to put that right.

Julian wasn’t bothered about time. For him, the challenge would be simply to complete it. He’d already planned to have a short break at some point during the run, essentially dividing it into two to make it more manageable.

Starting off near Winton Rec, Tamzin’s route took her through Meyrick Park and then through Lower Gardens to Bournemouth Pier. Turning right at Bournemouth Pier she then headed off in the direction of Sandbanks.

In fact, the first 5k of her run was the only part of it she did alone. Throughout the rest of it she was joined by friends who would run with her for distances of their choosing. 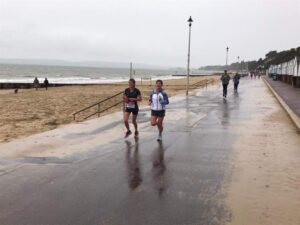 When she reached the end of the promenade at Sandbanks she headed off towards Whitecliff Park and Baiter Park before looping round Poole Park and heading back towards the seafront.

Once she was back on the seafront and had reached the end at Sandbanks, she turned and was greeted by a tailwind as she headed back towards Bournemouth. 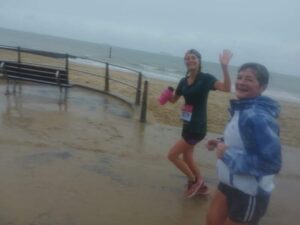 She was now at the half way stage and had been running the vast majority of her miles between 8:30 and 9 minutes per mile. On the 17th mile she began to start cranking the pace up a touch, then when she went past Bournemouth Pier she shifted into another gear. 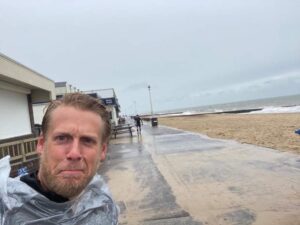 By mile 21 she was had got it down to 8:13 pace and was still going quicker. Then at mile 22 she reached the end of the promenade and headed up the slope towards Hengistbury Head.

She headed out towards the chalets that look across to Mudeford, increasing her pace yet further until she reached mile 24. She then turned back to complete the last 2.2 miles before finishing her run. 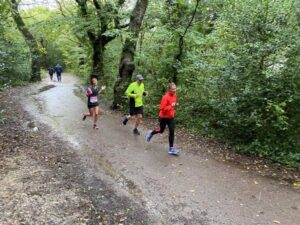 With a finishing time of 3 hours 47 minutes and 19 seconds, Tamzin had well and truly smashed her sub-four target. She’d taken a very large chunk off her previous best and it was a sensational run, all things considered.

It wasn’t just the time that was impressive, it was the way she had done it as well, running so strongly over the last 10 miles or so to end up with a huge negative split.

Even though the weather was atrocious, Tamzin’s friends did not let her down and she was thankful to them for braving the elements and coming out to run with her and support her on her journey. That helped the time pass quicker and meant that it didn’t feel as hard as it otherwise might have.

By the time she stopped her app another minute had gone by, giving her an official time of 3:48:19 in the Virtual London Marathon results. That put her in 4,081st place overall out of 37,337. 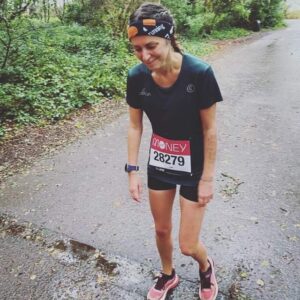 As for Julian, he found it extremely tough and physically draining but he was determined to see it through no matter how long it took him. At the 19 mile point he went home for a break, as he’d planned, and took a bath as he was suffering from a bit of back pain by that point.

After refueling and changing into some dry clothes he headed back out to complete the remainder of his run. When he officially reached the marathon distance, he’d been running for a total of 6 hours and 51 minutes.

Of course the Virtual London Marathon was done on elapsed time though, so that included the break he’d taken, giving Julian a final time of 8 hours 11 minutes and 36 seconds.

That put him in 30,384th place overall and 1,175th in the men’s 55-59 category. Afterwards Julian confessed that it had been his toughest marathon yet but he’d shown tremendous grit and character to complete the run despite his lack of training and the hindrance of the weather conditions.

It didn’t put Julian off though and he’s already entered the ballot for next year’s race, which hopefully will actually take place in London. As of now the plan for Julian will be just to keep his fitness going and look for improvement over shorter distances. 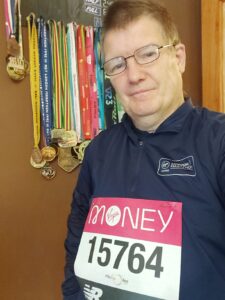 In the Dorney Lake Marathon where Rich and Sanjai were doing their Virtual London, the rain was again relentless and the crosswinds were tough to contend with.

After losing the two salt capsules when his shorts got drenched, Rich did end up getting struck down by cramp on the 23rd mile. That slowed him down quite considerably over the last four miles or so and put pay to his chances of securing a PB.

Then when he got to finish line and took his phone out to conclude the run on his app, he realised it hadn’t actually been recording his run at all. He’d pressed the button which he thought was to start the run but there was another start button which was off the screen and he hadn’t seen that one.

Luckily, he was able to submit the evidence of the run from his Strava activity though and he was added to the results list. Finishing in a time of 2 hours 58 minutes and 32 seconds, he ended up in 549th position in the overall standings and 258th in the men’s 18-39 category out of 6,598. 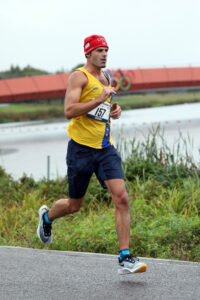 Although it wasn’t quite the time he’d been hoping for, it was still a fairly decent result for Rich but it was just frustrating as once again, cramp had ruined what would otherwise have been a very good run.

Sanjai performed better than he was expecting to and despite the difficult conditions, he managed to come away with a Good-For-Age qualifying time, finishing in 3 hours 19 minutes and 38 seconds.

That put him in 1,484th place overall and 62nd in the men’s 55-59 category. Considering his training hadn’t gone as well as he would have liked, that was a terrific result for Sanjai and he was pleased with his run. 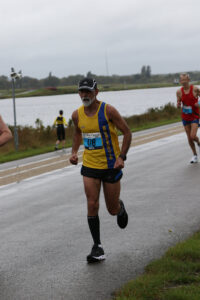 Sanjai surprised himself to pull a Good-For-Age qualifying time of 3:19:38 out the bag

What this year’s Virtual London Marathon and the efforts of the Bournemouth AC runners to took part has taught us is that if you want something badly enough you have to get out there and make it happen, whatever the weather.

There were many hurdles that they had to overcome, what with the uncertainty of whether the race was actually going to take place at all, the absence of club training for a period of time and the lockdown restrictions they had to contend with.

Then, when they finally realised it was going to be on in virtual form, they faced stormy weather conditions which made an already difficult task that much tougher.

Nevertheless, Tamzin, Julian, Rich and Sanjai all got out there and did themselves and the club proud and, although it wasn’t on as grand a stage as it should have been, they will remember their fantastic achievements all the same. 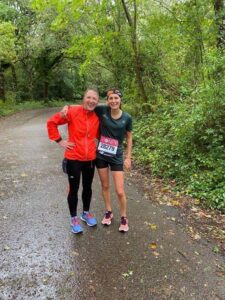