Tamzin Petersen and Louise Price were over in Winchester for The General 10k where they would be put to test on a very tough, hilly trail course

The best way to describe The General Winchester 10k Trail Run would be… ‘hilly!’ With over 800ft of elevation to negotiate, the course certainly delivered it’s fair share of ups and downs as well as a few surprises on the way.

The course was set in the Matterley Estate and was a multi-terrain route amongst ancient woodland and areas of scientific interest. Two Bournemouth AC ladies were brave enough to take it on and they were Tamzin Petersen and Louise Price.

It was the first race Lou had taken part in post COVID so she was keen to get back out there. Initially they’d entered the race two years ago but Lou had had to pull out that day due to injury. This was a chance for her to redress that unfinished business.

Looking at the times from previous years, they knew it was going to be a hilly one so were prepared for that to a certain extent. That still doesn’t make it any easier though of course.

Tamzin had been doing quite a few of the Thursday night sessions round the figure of eight loop at Queens Park Golf Course and was hoping that might help prepare her for the undulations and the off-road intricacies.

The first kilometre was on a motocross course with steep muddy banks in loops. Then it headed off into the countryside, featuring many different types of terrain and hills aplenty.

It was a fantastic course and even included a section where the runners pass by some old tanks and army vehicles.

The worst bit for Lou was at around the 6k point when she was faced with the longest hill she’d ever run up. Then, when you got to the top, the course narrowed and you had to climb through a bale of hay to get through.

Finishing in 23rd position, Tamzin completed the course in 52 minutes 52 seconds. That was enough to see her finish as 4th fastest female.

Hoping to come in under the hour, Louise actually ended up finishing in 1:00:06 which put her in 52nd place overall. Out of the women in the race, she was 10th quickest.

Even though it was super hilly, Tamzin and Louise both enjoyed the race and Lou said that she would like to go back and give it another go.

There was also a 20k Trail Run as well as a 10k Obstacle Race on the following day which looked great fun – and very muddy! 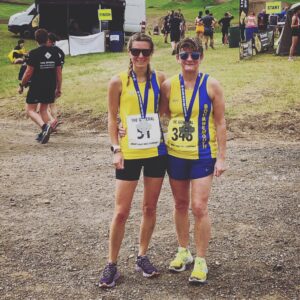