Taking place at Kinlockleven, in the Scottish Highlands, the 2018 Skyrunning World Championships were held over the weekend of 13th to 15th September and consisted of three different races. They were the Vertical, the Sky and the Ultra.

The races were open to both national teams and individuals, with world titles and medals at stake in each of the three distances. The Vertical race was 5km, featuring 1,000m of ascent. The Sky race was a 29km distance with 2,500m of climbing and the Ultra was 52km, with 3,820km of vertical.

One of Bournemouth AC’s top mountain maestros Toby Chapman was in action in the Ultra distance race, which was the Salomon Ben Nevis Ultra.

The route took the competitors up to the summit of Ben Nevis, Britain’s highest mountain, and the setting for the world’s first ever mountain running race back in 1895.

The course is highly technical in nature, featuring remote Scottish glens, singular tracks, airy ridges and high mountain passes. In fact, it’s a very challenging route with vast and varied terrain, including river crossings and a traverse of the infamous Càrn Mòr Dearg Arête ridges which leads up to the summit of Ben Nevis. It truly is a course that only the boldest, all-round ultra-runners would dare to attempt.

With some good previous experience of mountain ultra races that included completing the Mont-Blanc 90k in July and taking part in the Ultra Pirineu 110k and the Mont-Blanc 80k last summer, Toby certainly possesses the knowhow to do well. 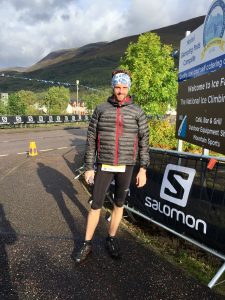 With his mountain race résumé growing nicely, Toby was primed and ready for the Salomon Ben Nevis Ultra

The Salomon Ben Nevis Ultra was a shorter distance than the aforementioned races but was brutal in nature so it was going to be testing.

It rained quite a lot the night before the race though which meant the course had to be changed due to some high scrambles that could’ve been dangerous. Therefore, instead of going up Ben Nevis, the competitors were rerouted back along the West Highland Way.

The change in course actually worked in Toby’s favour and once they came off the more technical terrain, Toby put the hammer down and began to make up several places over the latter stages of the race. 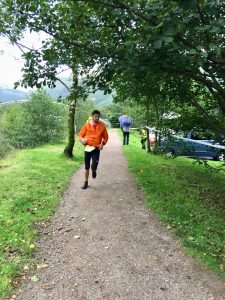 A change in course meant instead of going over the top of Ben Nevis, the route ran along the West Highland Way, which suited Toby better

By the third checkpoint he’d climbed back up to 65th place, arriving in exactly 1 hour 49 minutes. There were now three more checkpoints left before he would arrive at the finish. He was still in 65th at the 4th checkpoint, coming in in a time of 2:19:26.

This was where he started to flourish and began to move up the field. As others were beginning to flag, Toby was going well and had moved into 53rd place by the time he arrived at the 5th checkpoint. His time was now 2:48:44.

It was then onto the final checkpoint before the end of the race, where at his time of arrival Toby had shot up to 45th place, registering a time of 3:41:06.

Taking another five places before reaching the finish line, Toby ended up in a magnificent 40th place overall, completing the full 30.7 mile course in a time of 4 hours 46 minutes and 46 seconds. 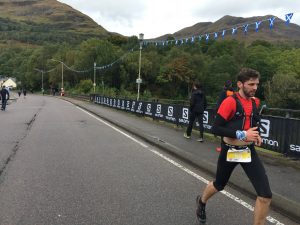 Once he got on flatter ground, Toby began to motor, picking up numerous places over the last few checkpoints

It was a fantastic result for Toby, especially given where he was in the standings with just a few checkpoints to go. The way he finished the race will be hugely pleasing for Toby.

Of course, if the route up to the summit of Ben Nevis had been upheld, it would have been a lot tougher to make up that ground, but nevertheless, to be so strong in the latter stages is always a good sign.

Despite the change of route meaning a lot less climbing was involved, Toby still racked up an elevation gain of over 5,000ft for the run, so that’s still 1,800m of ascent.

Toby even finished ahead of several of the athletes who were representing their national teams, which goes to show how accomplished his performance was.

The Ultra race was in fact won by a Brit, with Jonathan Albon becoming World Champion, crossing the line in a time of 3 hours 48 minutes. He was 12 and a half minutes ahead of his nearest rival, André Jonsson of Sweden. 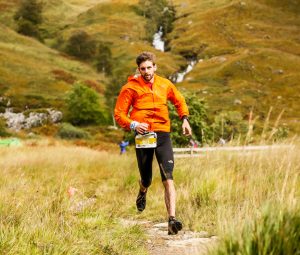 A great performance from Toby saw him finish the Skyrunning World Champs Ultra in 40th place, registering a time of 4:46:46 for the 49.4km course