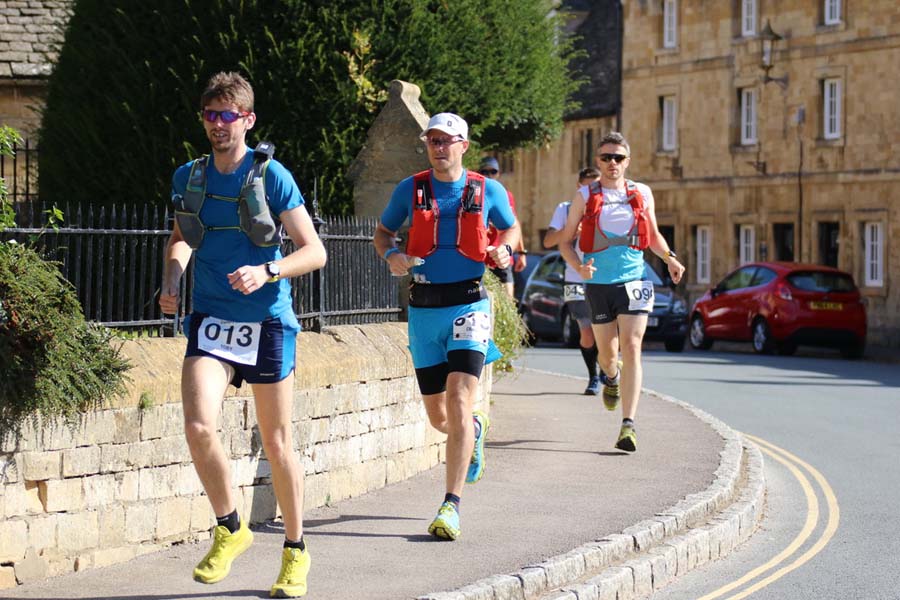 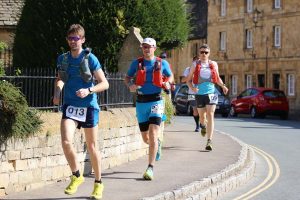 Nine weeks on from a hellish experience at the Lavaredo, Toby Chapman laced up for his first ever 100-mile race in the form of the Cotswold Way Century

Ultra distance running is a journey of discovery. The more you do it, the more you learn about yourself. What you can do, what you can’t do and what you need to do to help you be able to do the things you can’t do. It about finding out what works for you personally.

A few months ago Toby Chapman was sat on the high street in Cortina d’Ampezzo feeling awful, demoralised and very sick. At that point, he vowed never to do a long race again.

Two weeks later he entered his first ever 100-mile race and seven weeks after that he was on the start line of the Cotswold Way Century.

His experience at the Lavaredo Ultra Trail had been a difficult one. The race entailed heading off at 11pm for a 120km trek across the Dolomites mountains incorporating 5,800m of ascent. 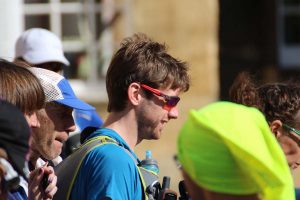 What was going through Toby’s mind here as he stood at the start line about to set off on a 102 mile journey?

His training had gone well and he was in great shape, but the race did not go as planned. About 45km into the race he started to feel sick and from that point on it became a real struggle.

It was still an epic achievement to complete the race but it was tinged with disappointment for Toby as he knew he could have done so much better. He came to the conclusion that it was all down to fuelling and not taking in any solid foods earlier on in the run.

Rather than let that disappointment get the better of him though, Toby vowed to take those learnings and use them to improve his performance in his next ultra race and that’s exactly what he was looking to do at the Cotswold Way Century. 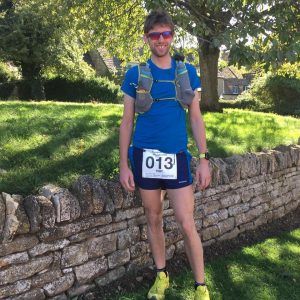 The route for the Coltswold Way Century starts in Chipping Campden and heads along the Cotswold Way, all the way to Bath Abbey.

One thing to note about the Cotswold Way though is, it’s extremely hilly, so Toby and his contemporaries had to be prepared for a bumpy ride. It was a mixed terrain course with a few road sections, lots of stony tracks, plenty of grassy trails and a number of ploughed fields.

At least time the race started off at a more sensible hour with the proceedings getting underway as the clock struck 12 midday. At the first checkpoint, 27 miles into the race, there was a lead group of five runners of which Toby was a part of.

They all arrived between 4 hours 38 and 4 hours 39 minutes, which was an average pace of 10:06 minutes per mile. A few others filtered in around 10 minutes later. They’d already hit over 4,000ft of elevation.

It appeared at this stage that everyone had approached it in a sensible way, rather than tearing off to quickly and tiring themselves out after the first marathon. If you really want to go the distance in a 100 mile race, you have to respect the distance, first and foremost. 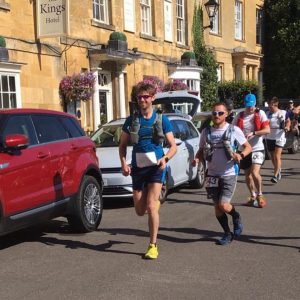 This time he was managing to consume some solid foods, including spaghetti hoops, Rice Crispy Squares and some GU chews, as well as some chews. He knew getting the right level of fuel into his body was crucial.

On they went, heading for the next checkpoint at Painswick, which was 48 miles in. Toby was still with the same two runners, Scott Smith and Zen Sherley-Dale. They came in at 8 hours 37 minutes and were sitting 9 minutes behind the leader, which was still Tommasso.

Over the past 20 or so miles Toby had added another 2,500ft of elevation and had been running at an average pace of 11:07 minutes per mile. They were now almost half way into the race.

The next checkpoint was at Coaley, 58.5 miles in, where Toby arrived at in 23 hours 20 minutes. Zen Sherley-Dale came in just after but Scott Smith had abandoned the race by this point. Tommasso had now stretched his lead to 19 minutes over Toby.

From there it was onto Wotton, 71 miles in. Toby came in at 14 hours and 5 minutes, still accompanied by Zen. They were still 20 minutes behind Tommasso. Toby and Zen had a 30 minute gap over the next runner to come in.

The past 23-and-a-half miles had seen Toby work his way up another 3,750ft of elevation and he managed to get through that at an average pace of 12:58 minutes per mile.

It was so far so good for Toby but there was no time for resting on his laurels. He needed to crack on and progress further. Next up, it was the 80 mile point at Horton, where Toby and Zen arrived at in 16 hours 29 minutes.

Tommasso had managed to increase his advantage at the front of the race to 29 minutes now and it was beginning to look like he would emerge the victor.

The fourth man in the standings, Greg Nieuwenhuys, had actually made some ground up on Toby and Zen over this sector and was now only 11 minutes behind them.

They were tiring significantly by this point but they soldiered on. Toby had continued to ensure he kept eating at each checkpoint and that seemed to serve him well and keep his energy levels in tact.

Over this next part of the race there were some occasions where Toby took a wrong turn. That was particularly frustrating because in a 100-mile race, the last thing you want to be doing is adding extra distance!

At one point he almost sat down and had a tantrum after running almost a mile back in the direction he came from after missing a turning. But he managed to keep his head and get back on the right track and, in actual fact, he found he was going surprisingly well despite already having 80 miles in the legs.

At the 87 mile checkpoint of Tormarton, Toby clocked in at 18 hours 10 minutes. After the various wrong turns he’d lost some ground to Zen and was now 16 minutes behind him.

Furthermore, his third place position was coming under threat from Greg Nieuwenhuys who was now only three minutes back. Tommasso was still out in front with a 22 minute advantage over Zen.

The following checkpoint was Cold Ashton, which was 92 miles in. Toby arrived there in 19 hours and 7 minutes. Crucially he’d managed to increase the gap between himself and Greg Nieuwenhuys to 7 minutes.

Zen was still 15 minutes ahead though and was looking good for 2nd place. Tommasso’s advantage had now been but to 12 minutes but it still looked like he’d have enough to see out the win.

The final checkpoint was at Weston, 99.5 miles in. The route was actually 102 miles in total so there was still a little way to go after that. At this stage though, Toby knew he was within touching distance of the finish and that must have been a great feeling. 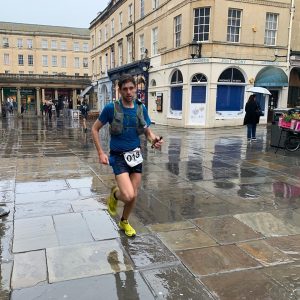 As he neared the end of his lengthy journey, the realisation of what he’d accomplished began to set in for Toby

He’d been running for 20 hours and 32 minutes and was in 3rd place on the leaderboard, 22 minutes behind Zen who was 2nd. Tommasso held a 14 minute advantage over Zen at the front of the race. Toby had now extended his lead over Greg in 4th to 16 minutes so it appeared that his top three finish had now been all but sealed.

Over the last 23-and-a-half miles, Toby had amassed another 2,500ft of elevation and had done it at an average of 10:51 minutes per mile.

There was a feeling of true elation as Toby arrived into the finish to take a well-deserved 3rd place finish. Crossing the line in a time of 20 hours 59 minutes and 50 seconds, he had done it! He’d successfully completed the full 102 mile distance and that in itself was a huge accomplishment. To get a top three finish was just the icing on the cake for Toby.

Tommasso Migliuolo held firm for the victory, finishing in 20 hours 25 minutes and 8 seconds. Zen took 2nd place, 9 minutes and 20 seconds behind Tommasso. Toby’s gap over Greg Nieuwenhuys finished up at 17 minutes as Greg took 4th place in a time of 21:16:53. 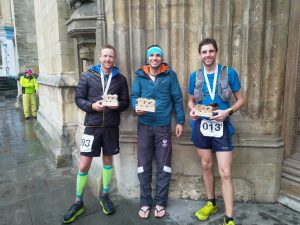 It had been an event he would never forget for Toby. The feeling of having completed a 100 mile race was one of great pride and satisfaction. Especially when you consider he had to overcome 12,100ft of ascent over the course of the run.

Above all though, he’d enjoyed the race. It had provided him with the opportunity to make new friends and work as a team in what is often perceived to be an individual sport. He met several inspiration people along the way and he’d managed to conquer his demons in regard to taking food on board and fuelling correctly.

It was exactly what ultra running should be. A massive personal challenge where you learn a lot about yourself. And Toby learnt that he had the character to suffer a disappointment, come back fighting and channel that disappointment in a way that would make him stronger. He also discovered that he had the courage, the belief, the will and the heart to see out an epic 102 mile adventure. 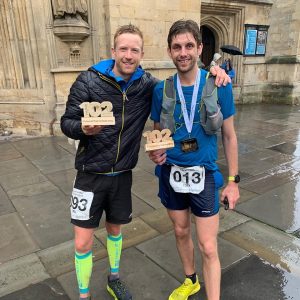 One highlight of the race was making new friends and meeting inspirational people and Toby ran the vast majority of it with Zen Sherley-Dale, pictured here on the left with Toby