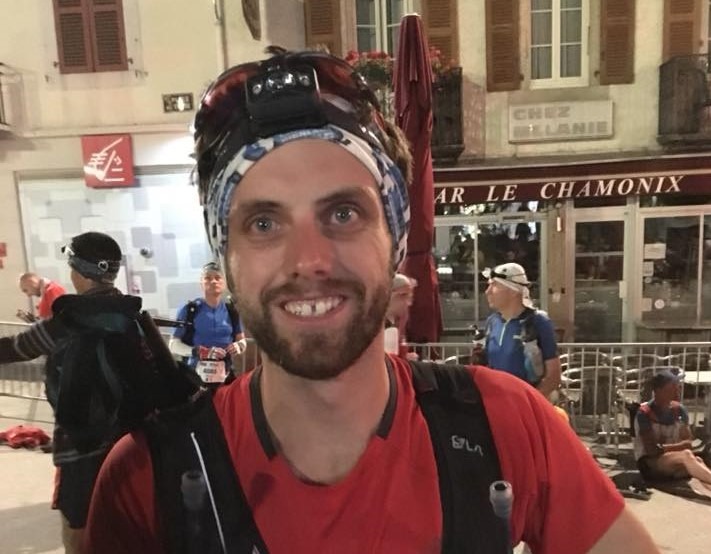 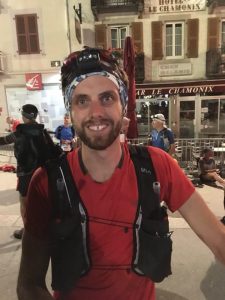 The Mont Blanc 90k race represented unfinished business for Toby Chapman. This time last year he was in the Mont Blanc 80k race as it was then, battling with severe altitude sickness that would eventually put pay to his chances of completing the race.

He’d managed almost 50km and been running for 9 hours 35 minutes before being forced to withdraw from the race. It was gutting for Toby not to be able to complete the distance after working so hard to get himself into the best possible shape he could. But when you’re running on mountains as high as Mont Blanc, with its 6000 metres of vertical, it’s never going to be plain sailing.

Also experiencing disappointment in his other attempt at a mountain ultra race in 2017, the Saloman Ultra Pirineu, a 110k race in the Spanish Pyrenees, Toby had had a couple of tough blows to deal with that year. At the Ultra Pirinieu he’d completed a massive 96km before being forced to pull out through severe dehydration.

It was frustrating as he’d had less than 15k left to go. But again, there is so much uncertainty when running on these kinds of extreme mountains. You can think you’ve cracked and then all of a sudden something hits you and it’s game over.

A lesser man might have decided off the back of those two DNF’s that perhaps these huge mountain ultras just aren’t for them. But not Toby. All they did for Toby was to add fuel to the fire and instil in him an even greater, steely determination to go back and make amends.

At the Mont Blanc 90k he was desperate lay the ghosts to rest of those two DNF’s that had been haunting him ever since.

Of course, that’s easier said than done though. With its ferocious 6220 metres of vertical and 91km length, the race is recognised as one of the most technical ultra trail races in France and is certainly one of the most demanding of its kind.

With narrow, exposed footpaths, snowy sections and an average altitude of over 2000m, the race presents plenty of difficult challenges to overcome.

That said though, the sensational scenery makes up for the difficulty, offering up some incredible sights to behold, including the Mont-Blanc sunrise, the Emosson dam in Switzerland, the Mer de Glace glacier and the sparkling lights on the way down to Chamonix.

The race starts off at Chamonix at an altitude of 1095m and doesn’t get an lower than that throughout. The first 10k is a climb of 1371m which took Toby an hour and 42 minutes to scale. That put him in 41st place at checkpoint number one in Brévent. 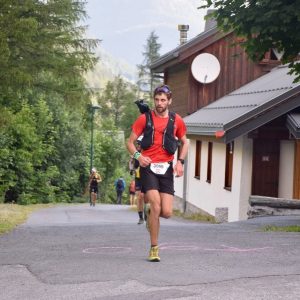 Toby set out with a steely determination to make it to the end this time, no matter what it takes

The next checkpoint was Flégere at 18.1k, where Toby arrived in 2 hours 35 minutes putting him in 54th place. Then, by the time he reached the next checkpoint, Tete Aux Vents, at 21.6k, Toby had climbed to 36th place.

Next up was the descent down to Buet, where Toby rolled up at in 3 hours 54 minutes. It was 27.7km from the start, so just under a third of the distance had been covered at this point. Toby had now slipped back to 54th place.

By the time the next checkpoint arrived, the total elevation gain was up to 2500m. Toby had now been running for just over 5 hours and had completed 34.4km.

It was then back down to La Villaz at 38.6km before heading up to Barrage Emosson at 43.6km. It was on the way up to that checkpoint that Toby started to suffer from the altitude. It’s not surprising really since he was at an altitude of over 1800m by that point. 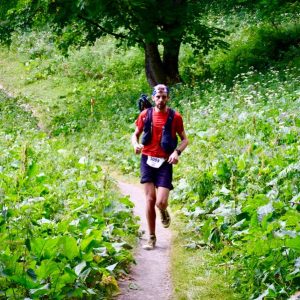 Giving himself just over three and a half weeks training out in the Mont Blanc region before the race, Toby had hoped this would provide him some opportunity to get used the altitude a little better.

The problem was though that they’d had such heavy snowfall that winter that he was limited in terms of what altitude level he could actually get to.

Whilst out there, he did some good training with his Bournemouth AC teammate Manol Dimitrov though, who does a lot of mountain running and knows how to handle that type of terrain.

In fact, the week before Toby did his Mont Blanc race, Manol had featured in a 48km mountain race called the Cortina Trail. Unfortunately he had some stomach issues of his own and had vomited a couple of times before abandoning 16.4 miles in. 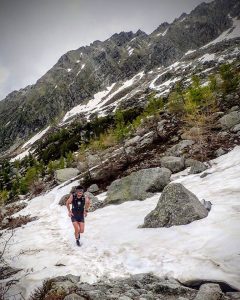 It would normally take a runner at least two-to-three weeks to acclimatise properly to high mountain altitude but the more you run in that environment, the more you can learn about what happens to the body and how you can adjust nutrition and speed to cope with the altitude better.

Once Toby got to the top of the climb up to Barrage Emosson he was in 68th and had now racked up an elevation gain of nearly 4000m. It was then down to Chatelard Village at 47.9km, where he arrived in 73rd place with a time of just under 7 hours 54 minutes.

Next it was the climb up to Cotogne, which was the checkpoint he failed to reach last time round. It was on the way up there that he finally succumbed to altitude sickness on that occasion.

He wasn’t about to let that happen again though and powered his way up to the top, arriving in 81st place and in a time of 9 hours 28 minutes. He’d now at least improved upon what he did last year which was a relief, but he didn’t want it to end there.

The next checkpoint was the Col Des Posetties at 57.7km. Arriving in just over 10 hours, Toby has now in 84th place and had reached an elevation gain of over 4400m. 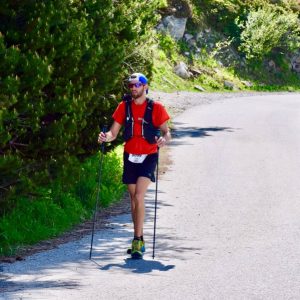 Toby making use of his trekking poles, a valuable asset for mountain ultra running

After that there was quite a bit of descending to do before he got onto the final climb. It was Le Tour first at 62.7km which he reached in 10 hours 41 minutes. Then it was down to Les Bois at 72.8km. Upon reaching that milestone, Toby was now in 80th place and had been going for just under 12 hours and 9 minutes.

It was then onto the final climb, first up to Montenvers and then onto Plan de l’Aiguille. When he arrived the final aid station, Toby was tempted to stop at that point. He knew he was close to town so it would have been easily done.

It seems unfathomable that a runner could go all that way in the race and then pull out so close the end. But that’s how tough these mountain races are. They are as much a mental battle as a physical one.

Grinding out the last climb, once he reached the top, there was no turning back then. He was now in 94th place and had been running for 15 hours 12 minutes. His elevation gain was now up to over 5900m and he’d completed 83.7km of the course.

All that was left was to head down the remaining 8km to Chamonix where the finish awaited. Having gained a few places on that final descent, Toby arrived there in 90th place, crossing the line in a truly remarkable time of 16 hours 9 minutes and 20 seconds. 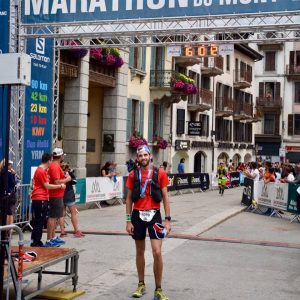 His total distance covered had reached 93.5km (58 miles) and he had amassed an elevation gain of 6827m (22,400 ft). It had been an incredible journey and he had now had the satisfaction of getting closure on the two DNF’s he suffered last year.

It was a moment Toby will no doubt remember as being a pivotal one in his running legacy. Managing to complete the race despite his problems with altitude sickness was a huge achievement and one that means a great deal to him.

It also showcased the improvements he’s been making in his running over recent times. He’s feeling a lot better in himself and a lot better whilst he’s out there racing, which is great to see. 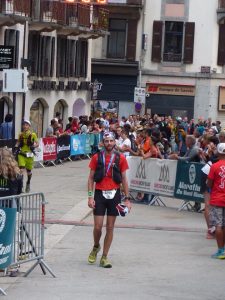 Although he was exhausted, Toby was thrilled to have made it to the end and laid the ghosts of last year to rest

There were 676 people who managed to complete the race this year and a further 300 or so who were unsuccessful in making it to the end, underlining just how tough it is.

To come in 90th place out of all those competitors was a simply monumental achievement from Toby. Perhaps even more so considering that most of those who finished ahead of him belong to proper mountain ultra clubs and most likely train on that sort of terrain on a regular basis.

When you put all that into perspective, it really was a fantastic run from Toby and he’s done himself proud, his family and friends proud and of course, his club proud as well. 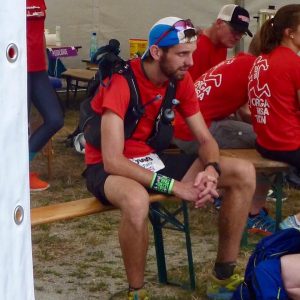