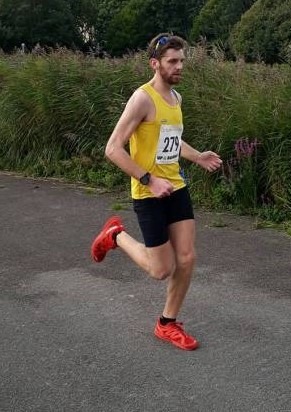 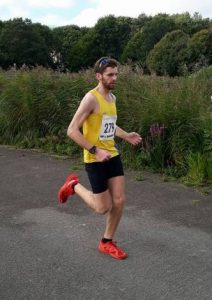 Back in his homeland area of North Somerset, Toby Chapman took on the Two Bays Tough Ten Challenge

Whilst many BAC members were making their presence felt at the Bournemouth 10, either participating in the race or helping out with the organising or marshalling, Toby Chapman was back in Somerset, the area where he grew up.

As he often does when he’s back visiting family, Toby took the opportunity to enter a local race. On this occasion, that was the Two Bays Tough Ten Challenge in Weston-super-Mare.

The Two Bays Tough Ten Challenge is a 10 mile, multi-terrain race along the North Somerset coastline. The race features some stretches across the beach in Weston Bay and Sandy Bay as well as some fast sections along the promenade, some woodland trails and some very challenging climbs. 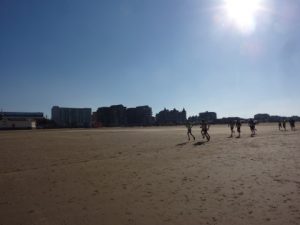 Some sections of the race were run across sandy beaches, hence why the call it the Two Bays ‘Tough’ Ten

It was a course that suited Toby quite well, since he possesses both the speed on the flat, as he had demonstrated in various Dorset races recently, and some decent climbing credentials, having competed in some of the toughest mountain ultra races out there.

Last summer, Toby took on the 80km Mont-Blanc Marathon and then in the autumn he was in the Spanish Pyrenees for the 110km Ultra Pirineu. So far this year, Toby has a victory in the Blackmore Vale Half Marathon to his name, having finished narrowly ahead of his Bournemouth AC teammate Steve Way. 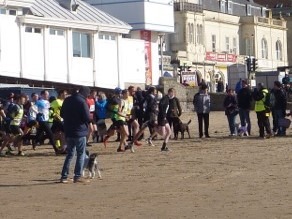 The lead group make their way across the sandy bay, which does give the race something of a unique characteristic

In the Two Bays Tough Ten Challenge, Toby found himself again jostling for position at the front of the field. This time he was battling it out with Chris McMillan of Weston AC.

The pair were neck and neck for the first half of the race but at around the six mile point, Chris made the significant move, breaking clear of Toby.

There was a massive hill going from just after the 7th mile to part the way into the 8th mile that proved hard work, even for an experienced ascender of Toby’s stature. 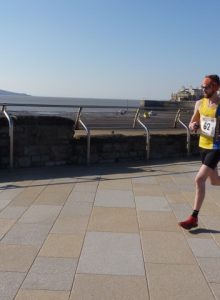 Toby zooms down the promenade at Weston-super-Mare

As they began the descent down to the finish, Toby tried his best to catch Chris but he ran out of road and Chris took the victory in a time of 58:35. That meant Toby had to settle for 2nd place on this occasion, crossing the line in a still remarkable time of 59:14. A total of 540 people completed the race.

This was a good result for Toby though, especially since it marked the end of his first 100 mile week for about 10 months, so the upping of mileage was bound to have taken it’s toll on him to some extent.

Toby is currently in training for the Highland Fling, a 53 mile ultramarathon following the West Highland Way, Scotland’s oldest official long distance footpath. The route takes the participants through Loch Lomand and the Trossachs National Park and features 7,500ft of ascent. The event is scheduled for Saturday 28th April, which is the week after the London Marathon. 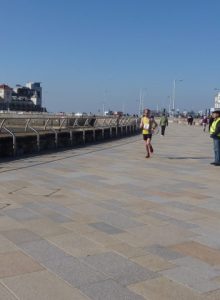