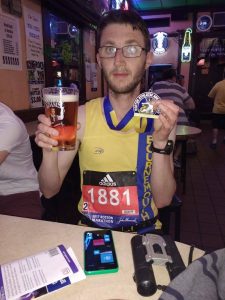 Across the pond, the Boston Marathon took place on Monday with our very own Tom Paskins amongst the 30,000 entrants lining up to tackle the iconic course.

The Boston Marathon is the world’s oldest annual marathon and is one of the six World Marathon Major races, along with London, Berlin, Tokyo, Chicago and New York. It attracts some of the world’s top distance runners including Kenyan superstar Edna Kiplagat and the winner of the men’s race Geoffrey Kirui, who narrowly defeated America’s own Galen Rupp.

Tom had to contend with intense heat as the temperature soared to around 28 degrees, with no breeze and no shade, presenting a real challenge. The course was also undulating with some testing inclines including the aptly named Heartbreak Hill which comes into play on the 20th mile. 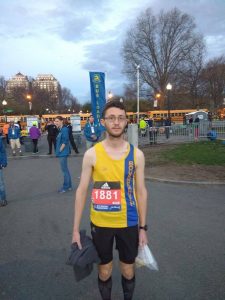 Despite the tough conditions and suffering from painful leg cramps from mile 21 onwards, Tom demonstrated tremendous tenacity and determination to finish in a time of 3 hours 6 minutes and 27 seconds. This put him in a remarkable 2,219th place overall with an average pace of 7 minutes 7 seconds per mile. He was the 55th Brit over to cross the line out of over 400.

Ironically, Tom found that it wasn’t going up the hills that presented the real problem it was the descents that really took it out of him. Nevertheless, Tom enjoyed the experience and has now crossed another one off the checklist toward becoming a World Marathon Major Six Star Finisher, having previously completed the Berlin and London Marathons.

Tom is already thinking of his next step toward that famous medal, with Tokyo potentially lined up for his next conquest.