Tony hunts down a new PB at Southampton Marathon 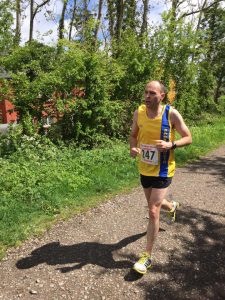 The VLM wasn’t the only marathon  to take place over the weekend. The ABP Southampton Marathon was  on the same day and attracted a good mix of competitive club runners, first timers and costumer wearing fund raisers amongst the 1,128 that took to the start line.

Bournemouth AC’s very own Tony Hunt was in that field and was targetting a super quick time of 3 hours 15 minutes. Due to the undulating nature of the course, the heat on the day and a bit of fatigue over the second half of the race, he wasn’t quite able to keep to the pace required but he did still manage a PB of over 11 minutes.

Tony’s finishing time was 3 hours 25 minutes and 35 seconds which put him in 79th place in the overall standings and 30th in the V40 category. This was a decent result for Tony given the toughness of the course which took the runners on a two lap circuit going over the Itchen Bridge twice, at miles 12 and 24. The bridge included a deceptively tough incline up one side.

Not only that but there was also the problem of the race intermingling with runners from the 10k and Half Marathons as well which were also on the same route, resulting in a fair bit of dodging and weaving on the second loop.