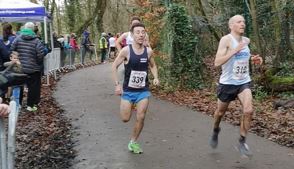 Tag made the trip up north for the tantalisingly quick Telford 10k, hoping to finally fulfil the prophecy of a sub-32-minute time

As far as 10k races go, the Telford 10k has got to be up there with the best of them. It’s a fast, flat course and it’s also heavily tree-lined meaning it’s well sheltered from the wind.

Even in unfavourable conditions, there’s still a great chance of a fast time at Telford and that’s what gets the top athletes flocking over. Of course, having so much high calibre competition around can also help runners reach their full potential.

It’s a race that Rob McTaggart has been interested in for a number of years now. Every year though, his chances of rolling out the perfect performance have been scuppered in some kind of way.

One year he’d planned to go up there a weekend of heavy snow meant the race was cancelled. Another year he was sick in the car whilst he was on his way up and felt so bad that he ended up turning round and heading back home.

Last year, he did finally make it to the start line but had an off-day, resulting in a finishing time of 32:29. Whilst that was still a very fast time, it wasn’t what he’d gone there for. He was aiming for that illusive sub-32.

Ever since then that had remained a primary goal of Tag’s but he still hadn’t quite been able to fulfill it. He’d managed it on the track, finishing in 31:29 at the Ladywell 10,000m in September. The closest he’d come on the road through was a 32:08 at Eastleigh.

This year he managed to make it the start line again, so that was one hurdle over with. Now he just had a produce the performance of his life to make it count.

Although he wasn’t feeling at his absolute peak, Tag knew he was in good shape. He won the Boscombe 10k at the end of November and in October he ran well in the Cabbage Patch 10, finishing in 53:03.

That month he’d also produced one of his best ever runs at the Cardiff Half Marathon, recording 10k, 10-mile and half marathon best times all in the space of one race, finishing in an incredible time of 1:08:56.

The question at Telford was, did he have one more extra special performance left in him before the year was out? It was a bleak and blustery day and the course was wet, with lots of leaves strewn across the path.

There is a short section of downhill near the beginning which can help runners to quickly shift into a good pace. Going through the first mile in 5:01, Tag had made a good start and knew that the race was on.

He then ran a 5:18 for his next mile split before producing a fantastic 4:57 for his third mile which put him right back on track. Going through the 5k point in 15:42, it was looking for Tag at the half way stage. 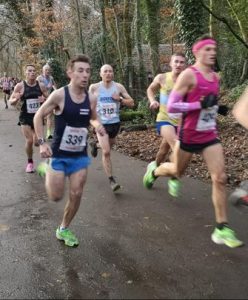 Tag was looking very strong at the half way point of the race, going through 5k in 15:42

It was effectively a two lap course with a bit added on at the beginning. Tag got to end of the first lap in 16:23. Maintaining the pace he was going at wasn’t going to be easy but he knew, if he could, he was going to be in for a blinding run.

For his fourth mile, Tag registered a 5:14, before getting through the fifth mile in a superb 5:10. Over the course of the second lap, he was overtaking people left, right and centre.

Many of the runners had gone out too hard and were beginning to suffer. Not Tag though. He had paced it well and hence was moving up the field rapidly.

Despite going so fast, he still had more left in the tank heading into the final mile and was then able to post his fastest mile of the race at 4:57, equalling his pace for third mile.

That just left the remaining 0.2 of a mile where he upped the pace even further as he headed for the finish. Crossing the line in a phenomenal chip time of 31:25, Tag had smashed his 10k PB and finally achieved that much sought after sub-32 on the road. 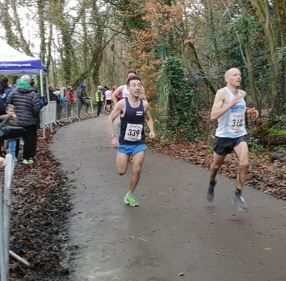 Such is the incredibly high standard of the event that that time only put him in 73rd place but that didn’t matter. It was about the time for Tag and having that kind of calibre of runners around him helped spur him on.

Amazingly, 16 runners came in in under 30-minutes, with Adam Craig sealing the race win in a time of 28:32. That was also a new course record for the Telford 10k, beating the previous best time of 28:51, which had stood for 15 years.

Omar Ahmed of Birchfield Harriers also came in under the previous course record, getting to the line in 28:39. Alex Teuten of Southampton also ran well to secure an official PB of 29:33 which put him in 9th place. A total of 1,128 participants successfully completed the course on the day.

For Tag though, it was a fantastic way to round off what has turned out to be an outstanding year for him. After a disappointing London Marathon earlier in the year, he has showed great character to completely turn it around and end on a huge high. He’ll now have every reason to be optimistic about what’s in store for him in 2020. 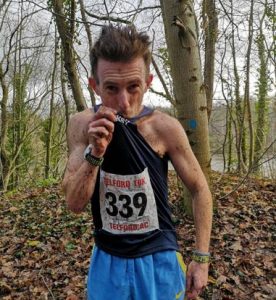 It was a terrific day at the office for Tag as he registered a fabulous new 10k of 31:25