Trev hops over to Yeovil for Easter Bunny 10k 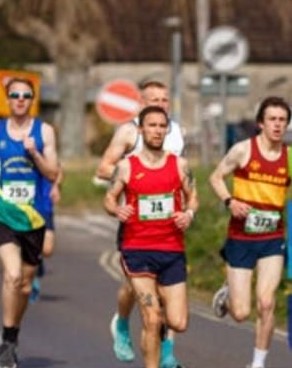 Whilst on route to Cardiff for a mini break, Trev Elkins did the decent thing and decided to stop off in Yeovil for a 10k race. Having heard that it was a PB course, he thought he’d give it a go, but it didn’t quite turn out as he was hoping.

The previous month Trev had set a new 10k best of 36:44 at Eastleigh so he knew he could put it together, in the right race, under the right conditions. The race he was doing was called the Easter Bunny 10k and it was staged on Easter Monday in Yeovilton.

Unfortunately the roads were quite energy sapping though and some of the B-roads had potholes which made it quite difficult to get into a rhythm. On the main roads there was traffic as well and the conditions were less than ideal as it was quite hot but also windy.

Trev Elkins in action at the Easter Bunny 10k

Trev got the ball rolling with a 5:46 for the first mile before completing the next three at roughly 6 minutes per mile. His pace dropped a touch over the last couple of miles, hitting a 6:09 and then a 6:17 before seeing out the final 0.2 miles at 6:13 pace.

That was enough to see him register a time of 37:46, which put him in 18th position overall. That was in a field of almost 300 runners. He also took 2nd place in the Male 40 category so, although it wasn’t quite the time that he wanted, it was still a fairly decent result for Trev.

Michael Parrott of Running for Time picked up the race win, getting round in an impressive time of 33 minutes exactly. That was just enough to edge him ahead of Peter Grist of Team Bath who was 2nd in 33:10. Twemlow man Lee Dempster completed the top three with his time of 33:41. 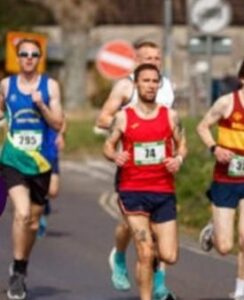 Vicki Ingham of Poole Runners put in an excellent performance to coming in as first female in a time of 36:27 and that put her in 11th place overall. The next lady over the line was Gill Pearson of Running for Time who was 16th overall in 37:23. Then it was Molly Rasch of Dorset Doddlers who finished just behind Trev in 37:48.

Next up for Trev it was the Bluebell Bash 10k which was a hilly trail run so that was likely to present a good challenge for Trev and test his strength as well as his speed.