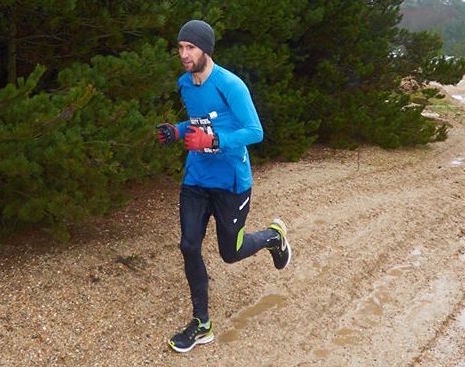 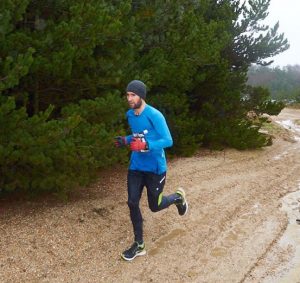 It was a cold, wet day as Trevor Elkins set out on a quest to retain the Dirty Devil Stampede 5k title that he had claimed the past two years

Staged on the rugged trails of the nation’s only dedicated army tank training ground at Bovington Camp, The Dirty Devil Stampede is far from your standard, off-road 5k or 10k race.

The muddy tracks and numerous water sections, sometimes over waist deep, give it a very unique twist. At one point, competitors are required to crawl under a net through an ankle deep muddy puddle. It could almost be described as a cross between a running race and an army assault course.

After winning the race the previous 2 years, Trevor Elkins is quite adept at handling the challenges that a course like this can bring and he was looking to retain his title in the 5k event. Having recently upped his mileage quite significantly, covering 120 miles in three weeks, Trevor was going into it feeling a little fatigued to say the least.

That said though, he had had a bit of a rest week in the lead up to the race though so was hoping to feel a little fresher but the heavy miles had definitely taken its toll.

In spite of that, Trevor started off well and was sitting in second place for the first couple of miles before edging his way into the lead. He had managed to build up a gap of around 20 metres before proceeding to fall over in one of the water sections.

The guy who Trevor had initially overtaken, Morven Telford, then seized his opportunity and reassumed the lead. After falling over a couple more times, Trevor had to resort to walking through the water sections, whereas Morven was running though, enabling him to extend his lead.

Because it was a training ground for army tanks, the water sections were deeper on the left and right hand sides, where the tracks go, and more shallow in the middle, although that was still up to waist height. The problem for Trevor was that he was trying to take the middle ground but his right foot kept slipping into the deep area.

With about half a mile to go, Trevor caught Morven up, but as he was weaker going through the mud and water sections, he wasn’t able to get back in front and was ultimately forced to settle for 2nd place. 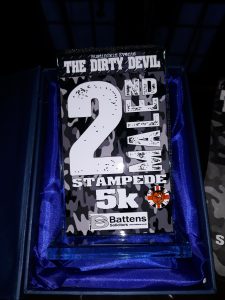 The trophy Trevor was awarded his 2nd place finish

Although he hadn’t quite managed to seal his 3rd consecutive victory, it was still a very commendable performance from Trevor and his finishing time of 21:43 was a slight improvement on his performance last year.

The gap between Morven and Trevor as they crossed the line was only 30 seconds, so it was a very close call. After the race, Trevor was presented with glass trophy for 2nd place, which was a nice consolation. 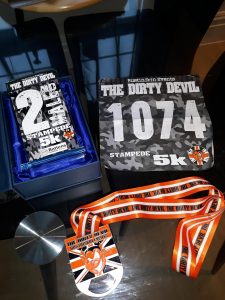