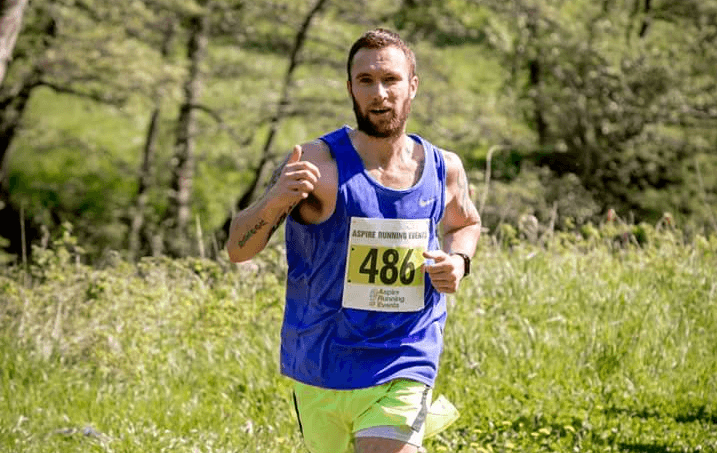 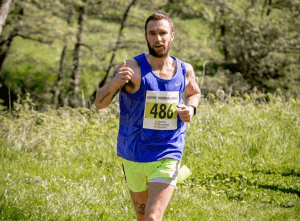 The day got off to a somewhat shaky start for Trevor Elkins at the Run the River event in Bristol when he accidentally locked his car keys in the boot of his car. That meant he was unable to get into the car – and to make matters worse, his hydro drink that he was going to bring with him in the race was in the car.

Fortunately, a friend of his, who was running in the 7.5k race said he would help him get it sorted. His friend’s partner was marshalling at the finish and she took time out to call the AA and get them to come out.

She sorted everything out for Trevor meaning he was able to focus on the race. He was in about 10th place after the first 400 metres but by the time the first mile was done, he had climbed to 4th and was at the back of a small lead group.

The only problem, out of those who were in front of him, he didn’t know who was doing the 7.5k and who was competing against him in the 15k. He managed to work his way past two of them, who it turned out were both doing the 7.5k. That just left one lead guy who seemed to be rather erratically pulling away and then slowing down, almost as if he was running fartlek style. 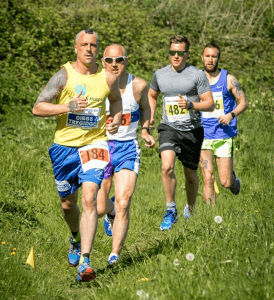 Trevor locks onto the lead group of three, although unbeknown to him, the other three were all doing the 7.5k race

It was an amazingly diverse multi terrain route across a mixture of roadside path, trails alongside the River Avon, with some woodland sections and some open countryside. Some of trails by the river somehow seemed to be just as muddy as they were in the winter.

Trevor has been to many of the Aspire Running Events in Bristol in the past so he knows the area quite well. In fact, the last couple of times he’d been over there for the Avon Valley Railway races, finishing 2nd to Brad Cox on both occasions. 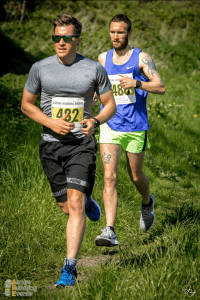 Trevor tucks in behind Ken Ham of Westbury Harriers who went on to win the 7.5k race

This time round he was determined to go one better though. As they approached the end of the first lap he saw the guy who was in the lead peal off to end his race, meaning he too was doing the 7.5k. That left Trevor out in front on his own.

As the heat began to take its toll on him, Trevor stopped to take in some water. He could see the guy who was in 2nd placed in the 15k race coming around the field around 400m back so he decided to get a move on.

Hitting the half way point at 31 minutes meant he was on course for a 63-minute 15k time, which would have been a decent result. At the 11k point though he started running into problems. His heart rate had suddenly jumped up to 192 at times, when it had been averaging 180. His mouth felt bone dry as well and he knew he was in trouble.

Coming to the conclusion that the guy who was behind him, Lee Kibble of Forest of Dean AC, was going to overtake him anyway, Trevor decided he would have to let him go past. But instead, Lee coasted in behind Trevor and the pair exchanged words.

Shortly after, Lee came to a sudden stop, suffering from a pain in his leg. Trevor decided to stop and see if he was okay before they both got going again. The 3rd placed runner was nowhere to be seen so they had a bit of time to play with anyway.

After the next water station, Lee stopped again, seemingly in real discomfort. Like a true good sport, Trevor stopped with him for a second time until he was able to get going again. Lee was then forced to stop for a third time at 15.3k and this time Trevor couldn’t wait any more and told Lee he’d see him at the finish.

After suffering a bit in the latter stages of the race due to the heat, Trevor had to dig deep to try and maintain his rhythm

After the car key incident earlier, Trevor was thinking that the AA might be there waiting for him. The finish came at around 15.7k and Trevor arrived in a time of 1 hour 7 minutes and 24 seconds. He’d hit 15k at 1:04, which was pretty good when you factor in the terrain of the trails and the four muddy puddle sections.

The AA were there waiting for him as they needed him to sign a declaration before they could get the lock picked on his car. After that, Trevor stayed to collect his two trophies – one for overall 1st place and the other for 1st in the Senior Men’s category.

This was Trevor’s second consecutive race win following his victory in the Race The Tide Beach Race the previous weekend, which went from Bournemouth Pier and entailed mostly running on sand.

Since he did manage to get into his car and get his keys back in the end, thanks to the AA, it would have to go down as a very successful morning for Trevor. Two brand new, gleaming trophies to put on the mantelpiece and another positive step toward his primary goal of being in tip-top condition for the Vitality 10,000 race on Bank Holiday Monday. 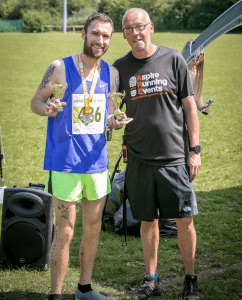