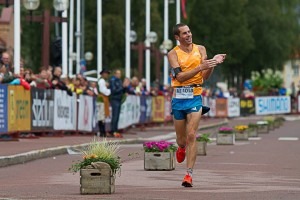 Some updating to do – apologies, computer problems and holiday to blame!
Some real BAC successes to report at home and abroad. Steve Way again features following another amazing Ultrarun, and wins and PBs in the Dorset Doddle and Bournemouth and Poole Parkruns.
Having previously accepted an invitation to compete as one of the elite runners in the inaugural Ultravasan 90k in Sweden on 23 August, Steve Way decided he had no alternative other than to show up, despite having, in recent months,  won an International 100k, and led the England team home in a PB at the Commonwealth Games Marathon and, if he was going to show up, he would have to continue training to give the race his best shot. This was a 90k trail race, the first race of this type Steve had attempted, and, as he himself admitted, not the best preparation for the 100k World Championships later this year, when ideally he would be resting after his recent exploits.  So, would this latest venture prove a setback?  Not a bit of it!  Steve‘s main competitor was one Jonas Buud, a local to the race, and whereas at 13k Steve was “comfortable”, by 35k he was not feeling as fresh as he should and was wondering if this was “a race too far”.  Nevertheless Steve won himself a bonus by leading at halfway, earning a sprint prize, but then things started to go slightly wrong, with delays for a pitstop in the woods, and for a repair to his number which was falling off, which meant Steve slipped from the lead to third.  Nevertheless, Steve pulled back to second, finishing in 6.12.28, behind Jonas‘ winning time of 6.23.38, a remarkable achievement in view of everything Steve has already accomplished this year.  And who knows what the result would have been had it not been for the unfortunate enforced stops?

A week earlier, 17 August, a number of BAC athletes ran in the Dorset Doddle, a 32 mile distance event along the challenging Dorset coast.  The race was won comfortably by Jez Bragg and Jon Sharkey both in a time of 4.47.  In 12th position was Richard Nelson, 6.05, and 28th was Caroline Rowley, 6.49, with Andy Gillespie finishing 42nd in 7.22.  To put these runs into perspective, 187 finished this race, and a not inconsiderable number retiring!

The Parkruns continue to throw up some excellent performances.  At the Bournemouth Parkrun, 23 August was the ‘birthday’ run, it being exactly one year since the first.  Fancy dress was the order of the day, and Paul Hill entered in to the spirit of it all, finishing third in his outfit as a Zulu (or something) Warrior.  Emma Dews was the first lady, and with her PB time set a new course record for the ladies.  Incidentally, the mens’ course record, previously held by Dave Long and then Rob McTaggart, also fell.  Who is going to take up the challenge so that we have BAC man and lady record holders?  Also competing were Nikki Sandell, Jud Kirk, Joe Price, Elsa Charlwood (good to see our youngsters having a go), Dave Parsons (with a PB!) and Will Price.  The complete field of 324 was a record attendance by a long way.  The week before, 16 August, Paul was again third of a field of 265, and also running were Paul Consani, Ian White, Jud, Nikki (1st lady), Joe, Ian Graham, Will and Paula Kirk, running with daughter Katie.  Meanwhile, at Poole on 23 August, Billy McGreevy and Peter Thompson were 3rd and 4th respectively, of 551, and on 16 August the winner was Dave Long, with Sanjai Sharman 29th, of a total of 591.

As mentioned, the 23 August marked one year exactly since the first Bournemouth Parkrun, which meant that the first League table was closed.  Individuals earn points for the League table by turning up and running, and also for helping, which a number of BAC athletes have done over the year, so the table reflects commitment to the Parkrun, rather than fast performances.  Top of the table for the first year was Jud Kirk, with Paul Hill second and Steve Cox fourth.  Also fairly high up in the table were Billy McGreevy, 14th, Joe Price, 33rd, Damian Boyle, 41st and Will Price, 45th.  Congratulations to all of those for their contributions to making the Bournemouth Parkrun the success it has become.