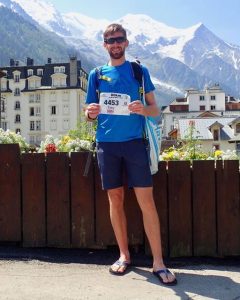 The Mont-Blanc Marathon 80km race is one of the most notorious races in the running calendar anywhere across Europe. It provides the opportunity for runners to test themselves to the ultimate limit, with the 82km route incorporating 6000 metres of vertical. It is widely recognized as one of the most technical races in France, but also one of the most beautiful.

This was the challenge that Toby Chapman set out to accomplish this summer. It was always going to be an extraordinarily tough feat but that is the kind of mentality Toby has. If it’s guaranteed that you are going to succeed then it isn’t really a challenge in the first place.

Toby had done a fair bit of training in the Alps in the lead up to the race so he knew what he was letting himself in for and had given himself the chance to get to grips with the conditions he would be facing.

The race kicked off from the Place de I’Église in Central Chamonix at 4am local time on Friday 23rd June. The runners were immediately thrust into an elevation gain of 1442m up to the first checkpoint at Brévant. This was 11km in and Toby arrived in just under 1 hour 53 minutes, putting him in 112th place.

It was then down to Flégère for the next checkpoint which Toby reached in 2 hours 48 minutes. That was 19km done and Toby had moved up to 106th.

37 minutes later, Toby arrived at the 22km mark, Tete Aux Vents, in 117th place. Then it was down to Buet, where he clocked in at in 4 hours 20 minutes. This was already a massive 29km completed and Toby was now 140th at this point.

The trail then climbed around 1300m to the Col du Corbeau before descending to the next checkpoint at Le Molard. This was now 38km done and Toby had been running for 6 hours 12 minutes. He was now 133rd in the standings.

There was another steep climb up to the next checkpoint situated at Barrage Emosson. This took Toby up to 43.3km covered with a total elevation gain of 3491m. He’d now been running for just over 8 hours and was really feeling the effects of the altitude.

The route then descended down just as steeply to Chatelard Village. Unfortunately this was destined to be the final checkpoint that Toby would reach. He was now 9 hours 12 minutes in and was really suffering with altitude sickness. He’d amassed a total of 47.5km and was in 186th place.

Next up was another climb, up to Catogne at the 53.2km mark. Sadly, Toby did not make it that far. He’d been feeling very sick when running uphill for the past four hours and had tried taking increased fluids on board, additional food and increased rest periods. Unfortunately none of this seemed to help and Toby had to abandon the race. He’d been running for almost 9 hours 35 minutes. 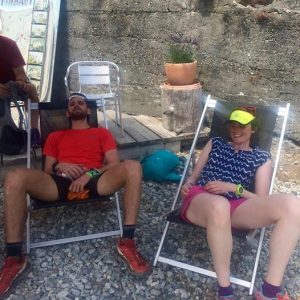 Whilst it was gutting for Toby not to have been able to complete the full 80km of the race, on reflection he should be able to look back on his efforts with immense pride. 47km of running up and down huge peaks with an elevation gain of 3,544m is still an amazing achievement that most hardy runners wouldn’t even dream of attempting.

It just goes to show though that in running nothing is certain. You can put in all the training and make every effort to get into the best possible physical and mental shape for a race, but anything can happen on the day. Injury could hit, illness can take hold, weather conditions could hamper performance. It is the great unknown of running and it’s one of the reasons we all love it so much and rejoice on those rare occasions when it all comes together as planned.

Toby showed great courage to push himself out of his comfort zone and attempt something that he knew was going to be incredibly difficult, even for an athlete of his great calibre. No doubt, he will grow from this experience and will come back stronger and even more determined to succeed in his next challenge.