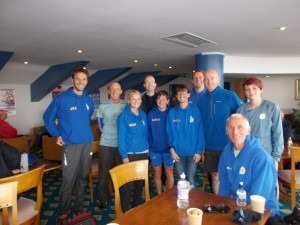 A few ‘last minute’ decisions to compete turned what might have been a disappointing Weymouth 10 mile race (organised by Egdon Heath Harriers) on Sunday 18 October 2015 into a successful day for BAC. Congratulations to both the Mens and the Ladies teams, each of whom won their respective Open races, and the individual prize winners. Jez Bragg (having travelled to Weymouth from Devon on the morning of the race) was the first of the BAC squad to finish (5th overall of a total field of 295), followed very closely by Graeme Miller, who won the prize as first Veteran, with Ross Smith, running his first ten mile race, the third BAC scorer. Heidi Tregenza was the first BAC lady to finish, winning the prize for second lady overall, followed 14 seconds later by Nikki Sandell, third lady overall, with the winning BAC ladies’ team (both Open and Dorset Road Race League) completed by Gemma Bragg.  The mens’ League team (of 5) completed by Simon Hearn and Steve Cox, were second on the day to Poole Runners.  There are two League races left, and, as things stand, no mens’ team in Division 1 can achieve 7 wins. BAC men have 3  wins and 5 second placings, so it could all be decided on the next two races.  BAC ladies have 5 wins so far, and one more win may achieve a win for the year, but it could still depend on how some other teams perform.  So, the importance of strong mens’ and ladies teams in the next two races, Gilly Hilly 7.5 (1 November – www.gillinghamtrotters.talktalk.net) and Boscombe 10k (22 November – www.bournemouthjoggers.co.uk – NO ENTRIES ON THE DAY), cannot be over-emphasized!  Weymouth 10 results (BAC): 5. Jez Bragg 60.02; 6. Graeme Miller 60.08; 13. Ross Smith 62.28; 39. Simon Hearn 67.21; 42. Heidi Tregenza 68.11; 43. Nikki Sandell 68.25; 50. Steve Cox 69.20; 53. Gemma Bragg 69.45; 72. Simon Hunt 73.04; 100. Andy Gillespie; 117. Ian Graham 78.27; 130. Louise Price 80.37.  All the trophies were presented by the Mayor of Weymouth, who also handed out a banana to each race finisher! 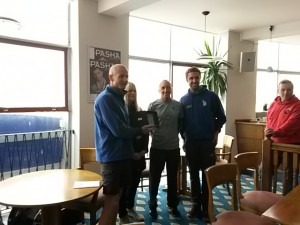 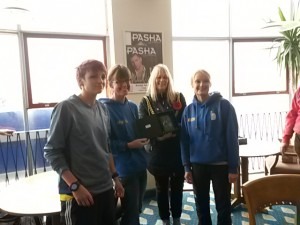 Meanwhile, on the same day, on the Continent, Peter Thompson was showing that his excellent form continues by completing the Amsterdam Marathon in a PB time of 2.25.31, to finish an outstanding 25th, of a field of over 12,000.  Furthermore, Peter was the first Brit to finish by some 4 minutes.  Any selectors watching?! Peter is developing the habit of excelling in major events, following his win in the Maidenhead Half Marathon, and second place in the Bournemouth (Festival) Half Marathon.  Also running in Amsterdam was Billy McGreevy, who finished 645th in 3.02.27.  Perhaps a change of jobs and house move have affected Billy‘s training, as his PB is ten minutes quicker than this, achieved in London this year. 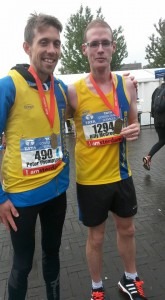 Going back one week, Jon Sharkey and Gemma Bragg competed in the Chalke Valley Challenge 10k, described as a “measured course on quiet country roads which undulate (which usually means it’s hilly) through some magnificent scenery”.  No results from this year’s race have been published, but it seems from a photo that Jon and Gemma won the respective mens’ and ladies’ races, presumably with Jon as the overall winner.  Anyway, we’ll assume that’s what happened. 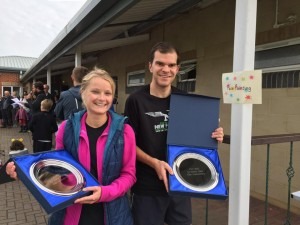 375 runners completed the Bournemouth Parkrun on 17 October, with Emma Dews finishing 6th, and Sebastian Hearn running yet another PB to finish 7th.  Considering that the race (because that’s what Parkruns are at the front!) was won by a JM15-17, it’s no shame – quite the opposite – that Seb was 2nd JM15-17!  Also running were Ian White, Alison Humphrey, Jud Kirk and, no doubt holding himself back in  preparation for the Weymouth 10 the next day, Simon Hearn, who was this day shown a clean pair of heals by his son!  The previous week, 10th October, Paul Consani was 6th of the 356 runners, joined in the run by Ian White, Jud Kirk and Sam Laws.  At the Poole Parkrun on 10 October, Peter Thompson prepared for the Amsterdam Marathon by winning, with Karl Welch second of the total of 650.  Andy Gillespie continues his regular appearances at the Salisbury Parkrun competing on both 10th and 17th October. 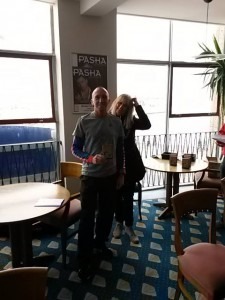 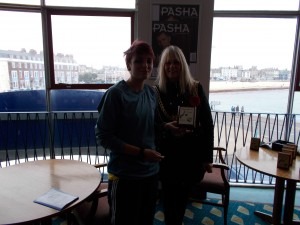 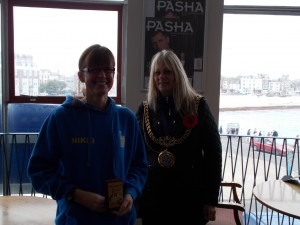