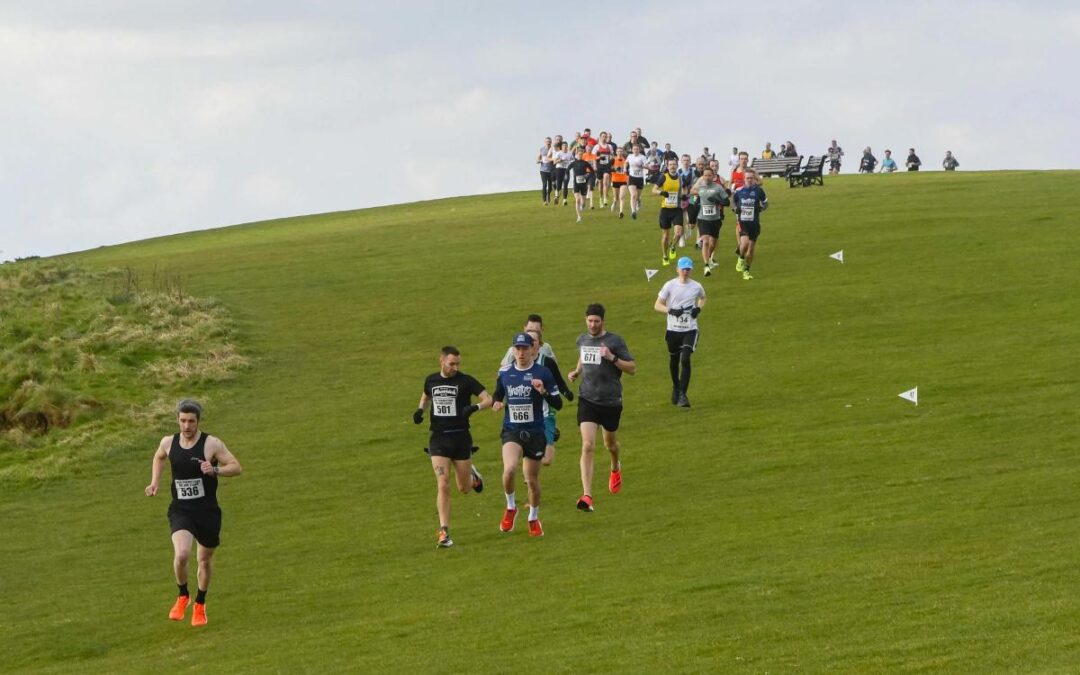 Providing a fun yet challenging environment for racing, the Weymouth Bay 10k certainly falls into the ‘not quite as easy as it looks’ category. Starting off with a couple of laps on grass, round the slanted Bowleaze Green, before dropping down to promenade where a fearsome headwind often lies in wait, it can be a real test for even the most hardy of road runners.

Of course, if you catch it on the right day, it could be a fairly fast run, but then you could argue, when does that ever happen in Weymouth?!? And on the day of the Weymouth Bay, there was a forceful wind to contend with. Only in one direction though. Before you reach the turning point, it’s an assistive tailwind, giving the runners a chance to gather some momentum before they get to the tough bit.

There were a few Bournemouth AC names on the list, with Trev Elkins, Matt du Cros and Nikki Whittaker all taking to the start line. For Trev it would serve as some good prep work for the Eastleigh 10k which was due to take place a couple of weeks later. 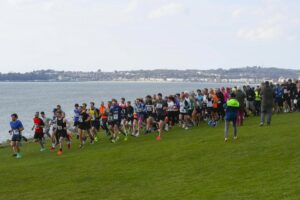 Having secured quite a few PB’s last year at various distances, Trev has been focusing primarily on parkruns this year and has been producing some good times in both Poole and Bournemouth. His best 10k time to date was the 37:24 he recorded at Eastleigh in August.

Matt has also been a regular at Bournemouth parkrun this year, consistently going under 20 minutes. He also competed in all four of the Hampshire Cross Country League fixtures and the Junction Broadstone Quarter Marathon for the road race league. His best 10k time thus far was 40:16 which he set at the Boscombe 10k in 2019.

Nikki has also been making the most of the parkrun circuit this year, taking part in one practically every week. She had also done one 10k race which was at Chichester in February where she recorded a time of 52:21 on a day when there was a significantly detrimental headwind on certain sections of the course.

She also did quite a few 10ks in the back end of last year, producing her fastest time for a number of years at Round the Lakes on Boxing Day. That was 51:12. Reproducing that kind of performance at Weymouth Bay was always going to be a tough ask. 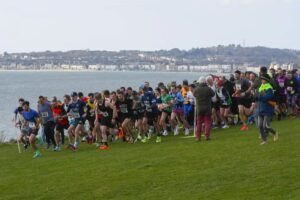 The tricky start on sloped, uneven ground gives the race a unique feel

Opening with a 6:20 for the first mile, Trev followed that up with a 5:58 for the second mile when he dropped down onto the prom and then a 5:51 for the third mile where he benefited from a tailwind. He was feeling okay at that point as he hadn’t really been pushing too hard.

At the 5k point he could feel the wind coming at him from the side, then after the turning point at 6k, it was a direct headwind and there was no escaping it. From that point, the battle really began. It was then a case of grafting all the way to the line and grinding it out. 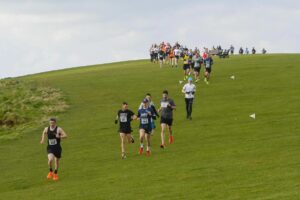 Trev almost caught Corey Stone of Weymouth Running Club up at the 8k point and then again at 9k but in the end Corey had enough in the tank to pull away to seal 5th position. That meant a 6th place finish for Trev with his time of 40:11. It was a pretty good result out of a field of 198 competitors. 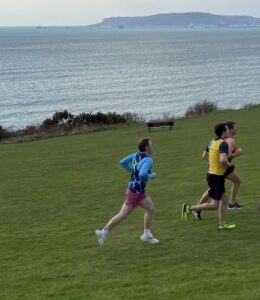 Recording a 6:44 for the first mile, Matt then got into gear with a 6:13 for the second mile dropping onto the prom and then a 6:08 for the third mile. Once he turned and had the face the wind head on he naturally slowed a bit, posting a 6:32 and a 6:38 for his fourth and fifth mile. He was then down to 7:36 pace for that very tough last mile after a lot of the energy had been sapped out of him.

Getting to line in 41:49, Matt came in in 12th place overall which was a fairly decent result for him, given the tough conditions he was faced with. 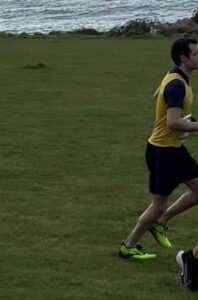 Finding the first mile tough due to the undulations and the uneven ground, Nikki eased herself into the race. She enjoyed the downhill stretch from Bowleaze Green to the promenade and soon began to find her rhythm. 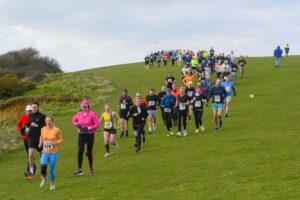 Nikki Whittaker heads down the hill with the masses

Often stronger over the second half of races, Nikki somehow managed to keep fairly even splits for the fourth and the fifth mile which is something not many of the runners would have been able to do. Again, the last mile took it out of her but she made it to the line 54:17 which put her in 86th place overall. 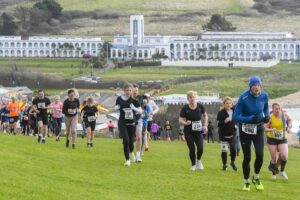 Nikki found the first part of the race tough going

She was a bit disappointed with her time as it was her slowest 10k for quite some time but conditions like that will always stack the odds against you. 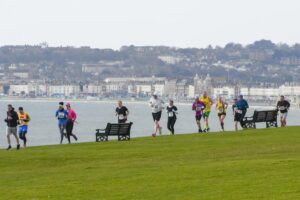 The sea view provided a great backdrop at Bowleaze Green

Ben Renshaw’s course record of 33:58 was never going to be under threat on a day like that and Elliott Avis picked up a comfortable win in a time of exactly 36 minutes, which was a pretty good performance on the day. The second placed runner arrived over one and a half minutes later.

It would appear that Georgina Povall of Egdon Heath Harriers was first female, crossing the line in 42:16, which put her in 15th place overall. There were quite a lot of names missing from the results list though. 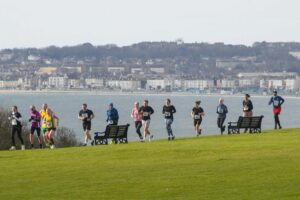 Isobel Rea of West 4 Harriers was second female in and 19th overall recording a time of 42:57. Then it Louise Mills of Woking AC who got round in a time of 45:34 to take 24th place in the overall standings.

Matt’s sister Lucy Ralph was also running it with her husband Jake and they finished in 121st and 122nd places with times of 58:32 and 58:33. Lucy has also represented Bournemouth AC in the past and previously trained with the club so it was good to see her back out there racing.