Wins for BAC at Stur Half and Parkruns (including Tollcross) 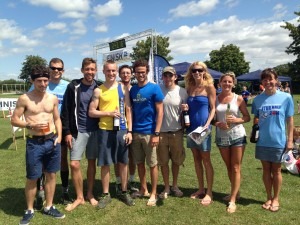 Following the BAC 1,2,3,4,5 at the last Dorset Road Race League event (Portland 10), BAC‘s Mens’ and Ladies’ teams turned on the style again to achieve excellent results at the Sturminster Half Marathon (the 8th – of 12 – League race superbly organised by Dorset Doddlers) on Sunday 3 August with wins and PBs. This time it was Peter Thompson‘s turn to win the race outright, followed in 2nd place by Josh Cole, running his first Half Marathon, and in 3rd by Jon Sharkey to complete the winning Open team race. The winning League team was completed by Simon Munro, 4th overall and seemingly thriving on running limited to lunchtimes at work, and Rob McTaggart who was 6th. Just squeezed out of the League team, by a few seconds, was Toby Chapman whom we were very pleased to see at the race after his move away from Bournemouth. Paul Hill ran a first Half Marathon of which many would be envious, and not far behind Paul were Damian Boyle and Tom Paskins, both running PBs. Also in the mix was Manol Dimitrov, perhaps still not completely recovered from his recent racing exploits in the Alps. In the ladies’ race, Emma Dews was second Lady overall, and first Veteran, with Nikki Sandell 4th Lady overall, and second Veteran. Completing the ladies’ team, both Open and League, was Caroline Rowley, whose run ensured an important second placing for the BAC Ladies, which means that, with four League races to go, both BAC Men and Ladies have made valuable progress following the Stur Half in this year’s Road Race League. 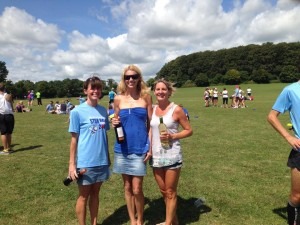 The day before, Joe Arundel was again the winner of the Poole Parkrun, the first of 437 runners. Well done, Joe! At the Bournemouth Parkrun, Paul Hill was second (Paul often wins this when Andrew Ridley doesn’t turn up!), and 9th was Jud Kirk. Also running were Duncan Wells (improving on the week before, so hopefully returning to fitness), Mike Farrell, running in his first Parkrun, Dave Parsons, Ian Graham and Will Price. Meanwhile, in Glasgow, the organisers of the Tollcross Parkrun were astonished and honoured to find that Steve Way, now something of a celebrity, had turned up to run in their “wee Parkrun” (as they described it on Facebook!). Steve was second in 16.45, which would have been a course record had one Gregan Clarkson not also turned up and won the race in 16.40!). Steve was obviously welcomed, and rightly so, at the Parkrun, with plenty of complimentary comments on Facebook, and a group photo with Steve in the centre, and the others clearly very proud that Steve had chosen to take part in their run.