The YDL Upper competition is for U17 & U20 male & female competitors.  The league covers the whole of Great Britain which is divided into three regions, Northern, Midland and Southern then a number of divisions.  BAC compete in a composite (joint) team with New Forest Juniors and can be seen under the results as Bn+NFJ.  This season, the team continue to compete in Southern League Division 2B alongside Brighton & Hove, Chichester, Southampton and Team Dorset (another composite team).  The top team after three matches will be promoted to division 1A which is a step below the Premier division and well within the team’s capabilities with a stronger presence. Fortunately for Bn+NFJ there is no relegation so the only way is up!

BAC have a proven track record of outstanding talent and achievement which continues to improve as the club develops and grows.  Many youngsters are moving up in age group or focus their efforts on various events beyond YDL, such as BAL, SAL and the Wessex leagues.  BAC continue to encourage athlete development by accommodating entry to these competitions.  Unfortunately, this means the team often suffer a loss in numbers at YDL matches as athletes understandably prioritise other competitions.  Sunday’s fixture was no exception with a clash with a prestigious multi events competition at Millfields Schools which deprived BAC of some talented athletes.  Irrespective of team numbers, these matches provide a great opportunity for healthy competition, enabling athletes to improve their skills, boost confidence and enhance competition experience.

Back to the YDL match at Kings Park. The extremely cold and blustery conditions were a test for the competitors, officials and spectators alike.  Many athletes donned woolly hats and took refuge under blankets.  As such an impromptu bobble hat competition ensued.  Jazmin Cooke’s grandfather was delighted to be declared the unofficial winner as the size and elegance of his bobble was unrivalled.  Evidently there are no rules banning athletes from competing in bobble hats which was a relief to many.

The day certainly got off to an eventful start with the BAC tent blowing into a nearby hedge and suffering probable terminal injury.  The diagnosis remains unclear as we await a closer inspection/autopsy results.  Unfortunately there were no challenges to the tent race as it hurtled into bushes at speeds of 0-60 in 3 seconds.

Fortunately Team Manager, Suzi Shepherd cheered everyone’s heart with her fabulous homemade flap jacks and smiles which were kindly dished out to helpers and officials.  The smiles continued despite her fear they had been blown away alongside the tent and her umbrella.  Fortunately they were found safe & sound in the club office, where a they were moved during the melee of the tent retrieval race.

BAC were represented by just three U17 men and no U20s which reflects a struggle in numbers for the club in these male age groups.

Samuel Adams continued to impress in High Jump with 1.50m for 3rd place, A string to equal his PB.  A promising performance and start to the season especially in such challenging conditions.

The U17 women turned out in reasonable numbers for some events although there was a deficit in track athletes from 300m and above. The welcome exception was newcomer Lauren East who ran valiantly in the 1500m to come 4th in A string.

Brooke Ironside came 2nd in A string in the 100m and 200m.  Jazmin Cooke jumped an inspiring 1.45m for a win in B string and came 2nd in 200m B string.  Both Brooke and Jazmin were close to their PBs showing great potential for the forthcoming season.  Excellent performances, considering the freezing and blustery conditions. 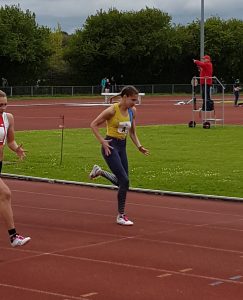 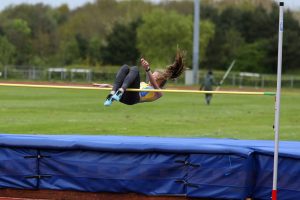 Yasmin Bridet looked impressive in the 80m Hurdles despite the conditions, finishing 1st as A string, another close to PB performance.  Yasmin went on to come 3rd in the shot putt A string with 9.26m.  Yasmin also ran as non-scorer in 100m to boost her competitive race fitness. 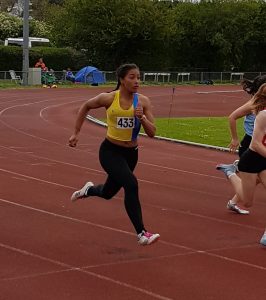 Yasmin Bridet speeding to the line in the 100m

Relative newcomer Freya Cutler was 2nd in Discus and 3rd in A string Javelin obliterating her previous PBs in both events, 26.55m and 25m respectively.   A great day for Freya, after playing cricket in the morning, an interesting warm up for the throws which obviously worked well.

New comer Amy Channock was 3rd in A string Hammer with what appears to be a PB of 37.98m.

Polly Yule, a last minute and welcome addition to the team, competed as non-scorer in Shot (U17) with a best performance of 9.97m and ran 80m Hurdles in 13.3 seconds.

Thank you to the NFJ U17 W athletes Jess Gordon, Jasmin Griscti, Millie Harris and Juliet Smallridge for competing alongside BAC as part of the composite team.

In U20 Women, Danielle Broom won the A String Hammer and Discus with throws of 55.78m and 41.68m respectively.  The Discus was a battle for all. The wind stalling anything that showed a positive angle of incidence, a real challenge.  Credit to Danielle for getting a couple of throws out over 40m and a winning throw of 41.68m.  In Shot A string, Danielle came 2nd with 10.66m.  In all events she was close to her respective PBs. 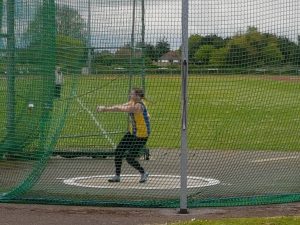 Isabella Shepherd had a fantastic day, winning all four B string events, Discus, Hammer (both close to her PB), Javelin and Shot. 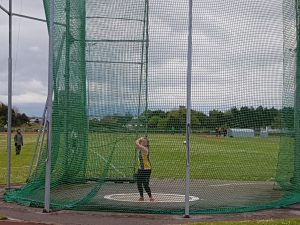 Amelia Dobson U20 returned gain to the jumps with another great performance win in the triple jump A string 10.32m, another brilliant victory for the team.  Amelia also won A string Javelin and Long Jump. 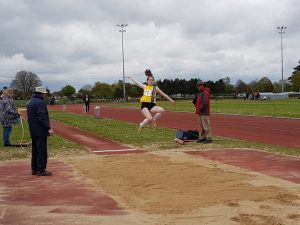 Rebecca Hannibal (U17) ran in U20 100m A string and performed extremely well to finish in 4th place against older athletes.

The Women’s 4 x 100 U17 Relay team had a great race, finishing in 2nd place in a time of 55.4 sec.  The team included of Millie Harris, Jess Gordon, Juliet Smallridge and Yasmin Bridet. 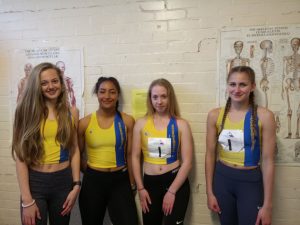 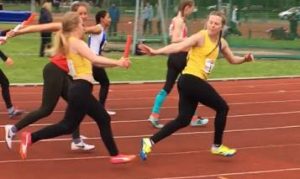 This a great YDL league competition and exciting to see so much ability at this level.

The YDL rules are slightly complicated regarding the numbers allowed to participate in each age group/gender per event, especially the Field events.  In addition only 6 non scorers are allowed per gender.  This needs to be managed well in relation to the Women’s team and BAC thanks the organisers and helpers for doing this so well to ensure the day runs smoothly.

Surely better weather can be expected for the next two remaining matches, both on Sundays. The next is 27th May at Withdean, Brighton and 1st July at Southampton.  At the moment only a 17 seater coach has been booked for both matches. Last year 50 seater coaches were booked at great expense by the club and were less than a quarter full for each match.  Let’s see if we can fill the coach and maybe one day, fill a 50 seater.  It’s a great competition.  Coach travel is provided free by the Club to athletes and officials (as with Wessex, YDL Lower, SAL & BAL)

The day proved the determination of BAC athletes, team managers and Officials.  It was so cold with a strong relentless north easterly wind.  Difficult conditions for everyone but people stayed focussed on the job in hand, trying to perform regardless of the weather.

Well done to everyone competing and thank you to all those involved in the organisation and smooth running of the day, including athletes, officials, helpers and supporters! 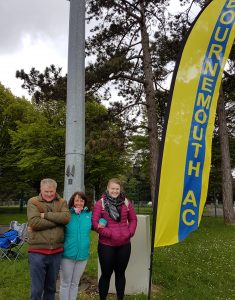