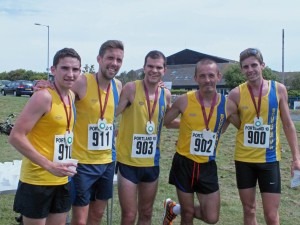 What a great moment for the BAC ‘tailenders’ in the Portland 10 (mile) race on Sunday 6 July, on the way down to Portland Bill, to see coming in the opposite direction the leaders of the race 1,2,3,4 and 5, all wearing the BAC vest, with a considerable gap before number 6. Then to spot our three BAC ladies all running well and working out (despite the brain going to complete mush at that stage of the race) that probably our Ladies’ team was going to win as well. The full results aren’t available at the time of writing, but we don’t need those to report that Jacek Cieluszecki was the overall winner, and by a considerable margin if the situation at 6 1/2 mile is anything to go by. The second, third, fourth and fifth positions were occupied by Peter Thompson, Jon Sharkey, Simon Munro and Toby Chapman respectively, which was how things were at 6 1/2 miles, except that, at that point, Toby was just in front of Simon (who ran his fastest Portland 10 ever), so it looks as if there was a ding-dong battle going on there. Jacek and Jon had both competed in the BAL fixture in Cornwall the day before, another successful day, of which more later. In the Ladies‘ competition, we don’t need the results to know that it was won by Nikki Sandell, with Gemma Bragg second, with Caroline Rowley‘s competent run ensuring that the Ladies’ team were the competition winners. BAC‘s sixth finisher was Paul Hill, who showed his class on his first race at this distance by his time of approximately 62 minutes on this hilly course and, of course, would have been a very useful back-up had anything gone wrong in front. Simon Way was the next BAC athlete to cross the line, with the BAC contingent completed by Andy Gillespie, who supported Caroline for much of the course, and Ian Graham (now showing his age!). So it was an excellent day for BAC with both the Mens‘ and the Ladies‘ teams winning the Open races, together with very useful Dorset Road Race League wins, and congratulations to everyone who took part for making this such a successful and enjoyable day. Here are some pictures, but please scroll through these and read on for more news of some of BAC‘s athletes activities. 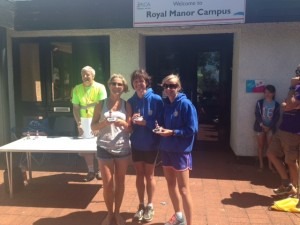 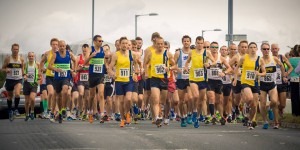 BAC Men show their intention at the start of Portland 10 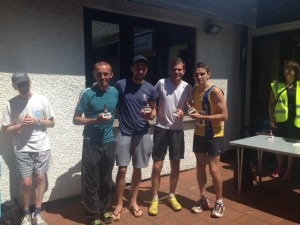 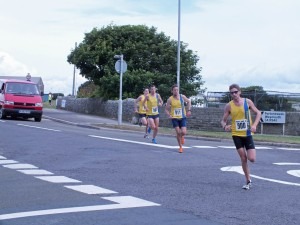 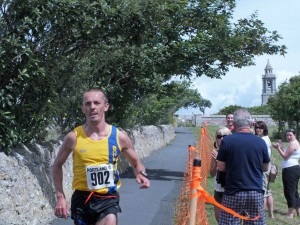 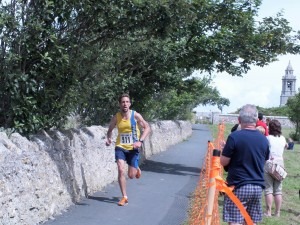 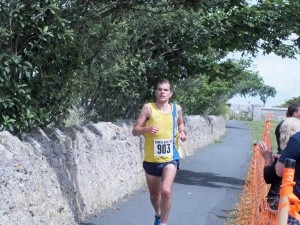 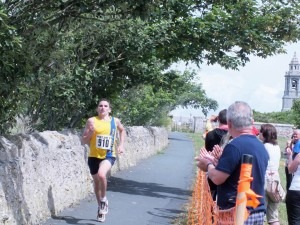 As already mentioned, on 5 July there was a BAL fixture at Par, Cornwall, in which BAC finished 2nd and, with one match to go (at Kings Park), we are definitely in a promotion position. Our road runners made their usual significant contribution to this success, including Jacek Cieluszecki and Jon Sharkey, who went on to be such an important part of the following great day at Portland, and must be commended for this after such a long day competing in Cornwall.   Jacek was 4th in the 5000 A string race in 15.23.12 (which Power of 10 says is a PB) and Jon was 2nd in the 3000 s/c B in 10.29.46. Rob McTaggart scored some useful points by winning the 5000 B in 16.21.15 and also winning the 1500 B in 4.11.77. In the 1500 A David Long was 3rd in 4.08.59, and mention should also be made of Karl Welch and Josh King, who occasionally compete on the road/cross country, who won the 800 A and B races respectively.

Steve Way continues his preparation for the Commonwealth GamesMarathon by competing, this time in the Torbay HalfMarathon on 29 June, in which he was 3rd (of 1730) in 1.07.49. A week later, Steve celebrated his 40th birthday, and his official donning of the Veteran mantel, by running 35 miles over the Purbecks!

Just some more races of which there are only sketchy details – on 29June,  Nick Kenchington was 3rd of the runners (the event is also open to walkers) in the 25 mile Purbeck Plod. The day before JonSharkey won the 10k element of the Giant’s Head Marathon (apparently the course is nearer 11k), and the day before that ManolDimitrov seems to have had a stunning run in the Skyrunning WorldChampionships in Chamonix, France, which he completed in 4 hr 8 min (distance unknown but obviously substantial), 106th, 4th Brit and 1st Bulgarian, a race of 2500 metres ascent/descent, with snow and zero visibility above 2000m. Perhaps the Portland 10 wasn’t so difficult after all!

Turning to the Parkruns of 5 July, in Kings Park, Paul Hill was 2nd in the Bournemouth Parkrun (Paul competed in the Portland 10 the next day), and joining him were Ian White, now regularly running under 20 minutes, Jud Kirk, Alison Humphrey (Ali Barnes as was!), Simon Hunt, slowly returning to fitness and Will Price, who went on to run in the Sway 5 the following day.  There were 220 finishers.  In Poole Park, the only BAC representative of the 498 running the Poole Parkrun was Simon Way, 9th, perfect preparation for the Portland 10!