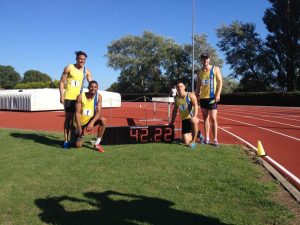 What a weekend 6/7 August was for BAC! 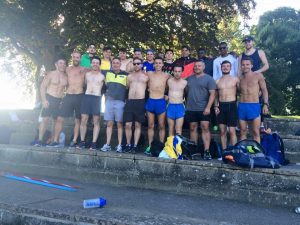 The Sturminster Newton Half Marathon (Stur Half) on Sunday 7 August doubled as the County Half Marathon Championship.  Josh Cole is in good form at the moment, and had in his sights a PB in this race.  In reasonable conditions, but quite breezy, Josh unfortunately found himself running on his own for much of the distance as the eventual winner of the race, Robert Mann, from Wiltshire, was also in good form and did achieve a PB of 72.56.  Josh finished second in 74.39, just outside his PB (achieved on this course) of 74.14.  Even so, Josh was the first to cross the line to qualify for the County Championship, so congratulations to Josh on being the Dorset Half Marathon County Champion!  Josh led home a BAC team which also consisted of Sanjai Sharma, 11th in 81.39 and Tom Paskins 19th in 84.37, the team winning the prize for 2nd mens’ team.  The BAC squad was completed by Ian Graham, 140th of the 271 finishers, in 1.49.50.  The Stur Half was the last of a series of road races comprising a South West Inter Counties Challenge, and Robert was the first of a strong Wiltshire team which won this race, and the complete challenge.  The proposal for an Inter Counties Challenge arose very, very shortly before the first race, and it was, unfortunately, not possible to find a manager for a Dorset team, so Dorset didn’t take part.  Hopefully things will be different next year! 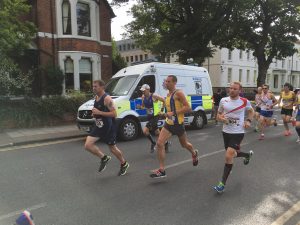 Steve Way on his way to winning the Gloucester City Marathon

Meanwhile, Steve Way was competing in the inaugural Gloucester City Marathon, which he won in a very respectable time of 2.29.45, and it follows that Steve was also the first veteran.  A total of 901 athletes finished the marathon.

The day before, Saturday 6 August, Club Captain Richard Nelson took part in the Great West Fell Run, on Dartmoor, a 5 mile race which is the “only race which takes you to the highest point in the South of England.  Its 1,362 ft of ascent is tough enough to challenge any off-road runner”.  Rich was 15th in a time of 51.56.

In addition to everything else which was happening on 7 August, Anthony Clark was competing in the Courchevel X Trail – a distance of 33k (in France?).  The profile of this race shows it rising up and up, with some undulations to make it more interesting, from 1258m to a summit of 2500m, before descending, again over various undulations.  Anthony, who is really making his mark in Ultra Running, was 18th in 3.52.35.

The South West Inter Counties Track & Field Championships took place at Exeter on Sunday 7 August.  As yet, the results haven’t been published, although it’s known that there were a number of BAC officials present.  When the results are available, this report will be updated with details of any BAC athletes who competed.