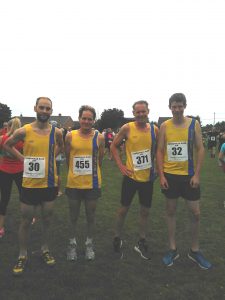 Of the 294 athletes competing in the D’Urberville Dash, organised by Egdon Heath Harriers, four were wearing the BAC vest, namely Max Catterall, Jud Kirk, Simon Hearn and Joe Price. This event is a 10k race, over forest tracks, heath, paths and some quiet roads, this year run in good weather, starting and finishing at Wool. Max ran an impressive race to finish 10th in 40.22, Jud was 22nd in 41.57, Simon was 22nd in 43.07 and Joe was 70th in 46.24.

BAC competes in the YDL (Upper) as a composite team with New Forest Juniors in Division SW2. At the final fixture of the season at Portsmouth on 24 July, the BAC/NFJ composite team finished 4th of 6 teams.  The final League positions haven’t yet been published, but it seems likely the composite team will finish 4th (the top two teams are promoted).  William Kearsey reports on the fixture at Portsmouth as follows:

“There was unfortunately a small turn out by BAC athletes on Sunday 24th July at Portsmouth with no male BAC athletes competing at all.

BAC assisted New Forest Juniors to finish 4th in the final match of the season in the YDL Upper Age Group. The composite team will therefore remain in the bottom league for next year.

Olivia Galloway was possibly BAC‘s best performer on the day. Olivia equalled her PB in U17 80m Hurdles with a time of 11.7 seconds enabling her to win the race. In the 100m Olivia came second in a PB of 12.6 seconds, she won the High Jump with a season’s best of 1.51 meters.

Isabella Shepherd had a good competition with big PB in U17 Shot, coming first as B string with 8.04 meters. Isabella also finished first in B string Discus and second in B string Hammer with a PB of 27.92 meters. Danielle Broom, after a long and busy season, had a quiet day by throwing well below her best. Despite this Danielle won all three of her events in U17 A string Discus, Hammer and Shot. Amelia Dobson won the U17 Long Jump and Triple Jump.

Thanks to the athletes, officials, helpers etc throughout the 2016 YDL Upper season.

New Forest Juniors are keen to continue with the composite team for 2017. Hopefully more BAC athletes will be willing to compete nest year. Reflecting on the remaining in the very bottom league and poor attendance by BAC athletes, are just too many leagues that BAC enter and competitions that some athletes enter individually each year?  On the other hand,  why do some athletes at BAC hardly ever miss a training session week after week but have never or hardly ever competed for the club.”