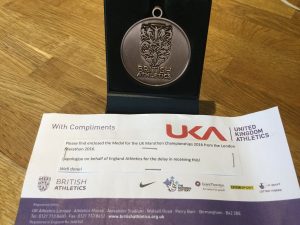 BAC has finally received from England Athletics the Bronze Medal won for the club by Steve Way, Jacek Cieluszecki and Toby Chapman (who have their individual medals) in the National Marathon Championships held in conjunction with the London Marathon in April. Almost every club in the country will have had a team competing in London, so many congratulations to BAC‘s team on achieving third place. Steve‘s time at London was 2.20.50, Jacek‘s 2.28.17 and Toby‘s 2.31.38.  It is hoped that the medal will be on display at the club’s Presentation Evening on Saturday 12 November at the Queens Hotel, Bournemouth at 7 pm (tickets, £7.50 to include a buffet, still available Tuesday and Thursday evenings at the club office!). 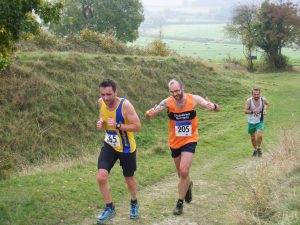 Just over a week ago, three BAC athletes took part in The Stickler, organised by Dorset Doddlers, a tough off-road races of just over 10 miles, starting and finishing in Shillingstone, and taking in Dorset’s 3 Peaks, The Stickler itself, Hod Hill and Hambledon Hill (although there does seem to be another one stuck in the middle!).  Of the 505 finishers, Damian Boyle was 12th in 1.11.46, a PB of some 7 minutes for this course, Nick Kenchington was 39th in 1.16.35 and Ian Graham was 252nd in 1.36.32. 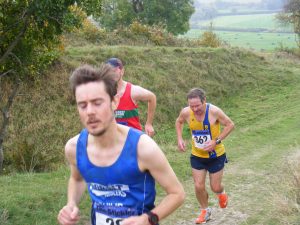 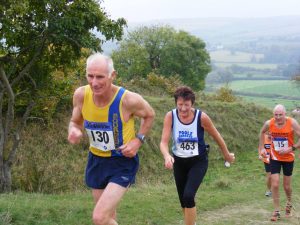 Congratulations to Nigel Hayman, competing at the World Masters Championships in Perth, Australia.  Nigel was just 0.15 seconds from a bronze medal when he finished 5th in the final of the M40 110mH in a time of 15.90.

Finally, over 20 of BAC‘s road and cross country athletes celebrated, primarily the success of both the mens’ and the ladies’ teams in the 2016 Dorset Road Race League campaign, at Mela Restaurant in Christchurch (with some going on elsewhere till the early hours!).  Many thanks to Club Captain Richard Nelson for organising a very successful evening.  Unfortunately, no-one thought to take any photos……………………