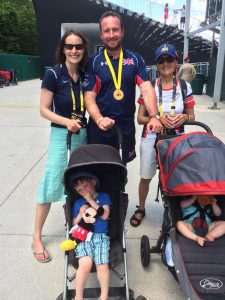 Luke Sinnott proudly displays one of his medals at the Invictus Games, Florida

Many congratulations to Luke Sinnott on his 400m Gold Medal and 200m Silver Medal at the Invictus Games in Florida. The Games, inspired by Prince Harry, feature mentally and physically injured servicemen and women from around the world competing in a variety of sports, including track and field. As reported earlier, Luke lost both his legs and almost lost one of his arms when an Improvised Explosive Device exploded whilst he was serving in Afghanistan with the British Army. It was a privilege to hear, at the Presentation Evening in November, his account of how he dealt with and conquered his new situation. Luke, a member of BAC, is coached in the long jump (which doesn’t form part of the Invictus Games) by Brian Camp, with an eye on selection to represent his country at the Paralympic Games in Rio. Those who have been following the Invictus Games on BBC TV will have seen an item concerning Luke, featuring his wife Sophie, and their young family, which includes a clip of Luke training at Kings Park (at a time when Brian was coaching, but unfortunately we don’t see Brian!).  The item appeared in the 6th of the 7 Invictus Games programmes, and is well worth searching out on BBC’s IPlayer. Viewers will also have heard that Luke was one of a number of people specifically mentioned in Prince Harry‘s speech at the closing ceremony.  We are very proud to count Luke as one of our number.

The Upton House Summer Series, organised by Poole Runners, commenced on the evening of Wednesday 11 May.  Jacek Cieluszecki won the Senior Race in a time of 17.49, followed by Sanjai Sharma, 11th in 19.27, and Helen Ambrosen, 131st, and first V55, in 26.08.  275 runners completed the course, which consists of two laps of Upton House Country Park, a distance of between 5 and 6 kilometres.