Gold Medals at Bedford and Cambridge, multi BAC participation in the French Alps and a 10k win in Brixton 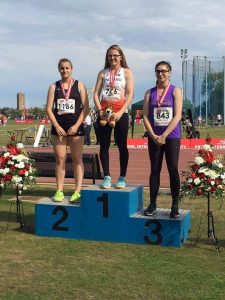 The week up to, and the weekend 27/28 August, have been remarkable for BAC participation and wins. In Bedford, Danielle Broom achieved yet another National Championship U17 medal, and in Cambridge, Janet Dickinson won an age category gold at the European Ultra Multi Events Championship. ‘Ultra’ very often means Jez Bragg, one of the top Ultra runners in the country, and now is no exception, as Jez along with Jacek Cieluszecki and Linn Erixon, took part during the week and at the weekend in different races of the Ultra Trail Mont Blanc (UTMB), and, running a more ‘normal’ distance, Peter Thompson was the winner of the Brixton 10k. 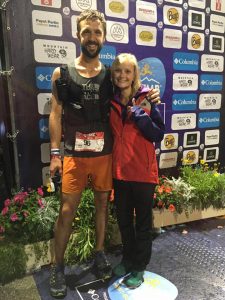 Jez Bragg, with Gemma, after completing the 170k UTMB

To the French Alps first, where, at 6 pm on 26 August, Jez Bragg set out on the UTMB, 170k (about 110 miles), with something like 10,000m of ascent and descent.  Of the 1468 who completed the event, Jez was 78th in 30 hours, 2 minutes and 35 seconds.  Jez is very familiar with the UTMB, but says this year was undoubtedly the hardest of the lot, with many challenges, including very high temperatures and electrical storms and “it was pure relief to make it back to Chamonix”.  Still an amazing result by anyone’s standard!  Earlier the same day, at 9 am Jacek Cieluszecki had set off on another race of the UTMB series, the CCC, starting at a different location, Courmayeur, a slightly shorter, but still very challenging, race of 101k, with 6100m of elevation.  Jacek finished 91st, in 16 hours, 36 minutes and 1 second, of a total of 1386, an excellent result considering Jacek, so far, considers himself a road runner.  Jacek says: “I had higher expectations but I feel I can clearly improve my mountain running”.  With Jez as mentor, this is surely the case!  Less fortunate was Linn Erixon, who withdrew during the TDS, a race of 119k on 25 August.  Nevertheless, Linn ran for 50.6k in 6 hours, 48 minutes and 35 seconds, climbing up to something like 2569m in the process.  We don’t know what caused Linn to withdraw, but hopefully she is fit and well. 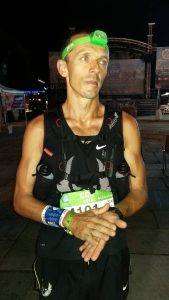 Jacek Cieluszecki after running 101k in the French Alps

Danielle Broom‘s amazing season continued at the weekend, where she competed in the England Athletics U15/U17 Championships at Bedford.  Danielle has won a number of gold medals this year at County, Inter-County and SW Schools level and at National (or, more accurately, International – SIAB Schools International) level, together with silver at National English Schools, and to this tally Danielle added a Championship performance and a gold medal in the Discus, with a throw of 41.03 at Bedford on 27 August.  The next day, Danielle competed in the Hammer competition, finishing fifth with a throw of 52.63.  Well done, Danielle! 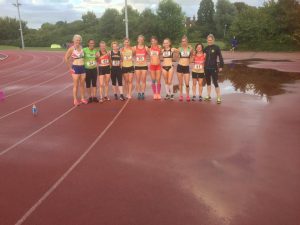 It isn’t surprising that Janet Dickinson could hardly walk on Bank Holiday Monday considering that, over the weekend, she had competed in no fewer than 14 events (a tetradecathlon)!  This was at the European Ultra Multi Events Championship which took place at Cambridge, and in which Janet was competing against athletes from Finland, Belgium, Netherlands, Germany and, of course, UK. The 14 events were 100mH, HJ, 1500m, 400mH, SP,200m,100m,LJ, 400m, JT, 800m, 200mH, DT and 3000m.  Janet won a gold medal in her age category (but is honest enough to admit she was one of only two!) but, perhaps more significantly, on the age-graded points, Janet was 5th woman.  Most people would consider it an amazing achievement just to complete all these events, never mind times and distances! 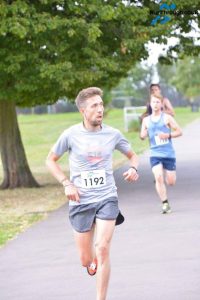 Perhaps Peter Thompson would admit that he was having an easier time of it than Janet when he ran in the Brixton 10k on 28 August!  Congratulations to Peter on winning the race in 34.20.  Of the 275 finishers, Manol Dimitrov was 4th in 37.21. 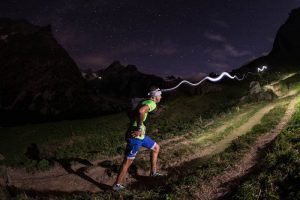 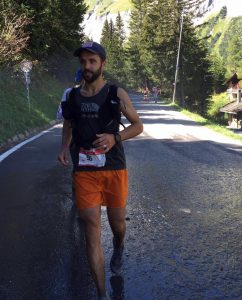 Jez still looking fresh after many hours of running…………….. 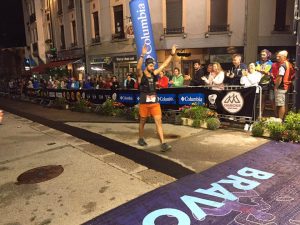