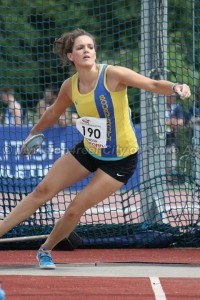 Phoebe Dowson took discus gold at the U23 UK championships in Bedford last Saturday.
Phoebe opened her account with a safe 44.34m, but then proceeded to record 5 throws better than her previous PB and finished with a life-time best of 51.12m. This raised her own BAC all time record by 3m.
It was a close encounter with her friend and rival Shadine Duquemin, Shaftesbury BH. Phoebe posted her best throw in round 4 to take the lead, but then amazingly Shadine matched it exactly in round 5.  However another big throw of 50.61m from Phoebe in round 5 proved to be the decisive 2nd best throw, winning the gold on count back.
What a competition and certainly one of the performances of the week end from BAC’s discus diva!