Harry Smith soars to stardom at Night of the 10,000m PB’s 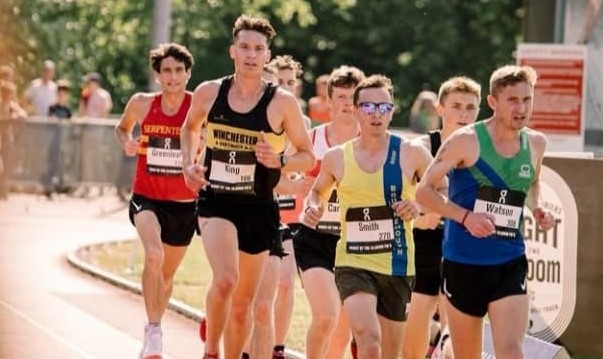 It’s got the razzmatazz and it’s got that big event feel to it. The sense that something special could happen… the anticipation… the intrigue… the intensity. The Night of the 10,000m PB’s has become a spectacle that is not to be missed, combining live, top class distance running with an atmosphere unlike any other track and field event in athletics.

Hosted by Highgate Harriers at their Parliament Hill Track, the evening promised to be a memorable one for all those taking part, spectating or officiating. Complete with live music, a back straight DJ and the annual Legends Seminar, it was all set for a fabulous evening of entertainment.

And for those taking part, it was a golden opportunity to compete against the very best and realise their full potential. That was exactly what Bournemouth AC speedster Harry Smith was looking to do when he lined up in Race 2 of the star studded schedule.

Harry came into the race with fantastic pedigree, having recorded a superb sub 32 minute 10k at Eastleigh in August. Since then he’d recorded the fastest parkrun in the country one Saturday in January when he blitzed Poole parkrun in 14:48.

He’d also put in a couple of very strong performances in the Southern and National 12-Stage Road Relays for the Bournemouth AC team and won the Salisbury 10 in between.

Two weeks before the Night of the 10,000m PB’s, Harry competed in the Romsey Marathon Relay where he ran three separate 2.55 mile legs to drive his team onto second place. The third leg of those he got round at a blistering 4:52 average pace to help the Winterslow Whippets to a 2:29:42 finish. That was just 42 seconds behind the Romsey Road Runners team that won it.

The day before that he finished first at Bushy parkrun in a sizzling time of 15:18, which was an average pace of 4:53, proving what a marvellous purple patch he’s going through at the moment.

The first races of the Night of the 10,000m PB’s event were in the afternoon and it was a very hot, sunny day which made it even tougher for the athletes in those races. Harry didn’t seem to mind the heat though as he was on fire anyway and wearing his stylish shades and new Bournemouth AC vest, he acclimatised well. 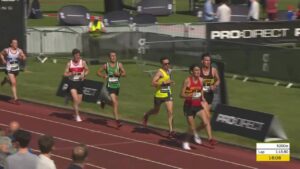 It was the very first airing of the new Soar vest stock that Rob Spencer had ordered and it would turn out to be a memorable opener for the gleaming garment. There was also coverage of the event on the BBC iPlayer as well as live streams of the action so the vest certainly got some good exposure as did Harry on behalf of the club.

Putting in a very quick first mile, Harry didn’t look out of place in amongst the elite runners he was up against. He then followed that up with an even quicker second mile. Mile three was a similar sort of pace to the first mile and he was now getting on towards the half way stage. He knew at that point if he could keep it up he’d be on for a tremendous 10k best.

Maintaining his pace very well for the fourth and fifth mile, that left Harry with only two kilometres remaining. This was where he’d have to really dig in to keep the pace up. His sixth mile was slightly slower but not by much and once he hit the last lap he found the strength to pick it up a notch knowing he was nearly there. 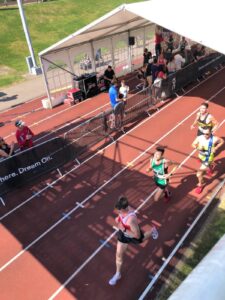 That culminated in an outrageously quick time of 31:41.39 which out him 5th out of 33 runners. Given that the standard of the field was so high in these races, that was a tremendous result from Harry and showed that he really is capable of mixing it with the best of them.

Chiltern Harriers star Aran Davidson was also in the line up for that race and he finished 12th recording a time of 32:34.76. Seven men got in under 32 minutes and 20 of the field ran a sub 33 minute time.

Harry’s watch didn’t really track the run properly and miscalculated the distance, throwing out his split times but a 31:41 finish in a 10k would have equated to an average pace of 5:06, which was extremely impressive. 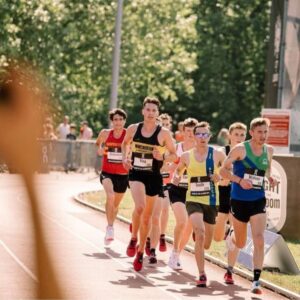 Southampton man Alex Tueten was in one of the highest standard 10,000m races and he registered a time of 29:56.63 to take 18th place. Highgate Harriers hero Alexander Lepretre was also in that race and he finished 22nd in a time of 30:18.42.

There were also a couple of mile races on the schedule and Poole AC woman Melissa Courtney-Bryant was in one of them, finishing 4th in an excellent time of 4:29.81.

The Emsley Carr Mile for the men is quite a prestigious race and has been won by some very famous faces in the past. This year’s edition featured former Wimborne AC man Piers Copeland, who has also run for Bournemouth AC on occasions as hire claim. He was one of the favourites having won the 1500m at the UK Indoor Championships earlier in the year.

Piers very nearly won the race but just got pipped on the line by Matt Stonier of Invicta East Kent. There was only two hundredths of a second in it but it was a new mile PB of 3:54.91 for Piers so still an excellent run from him in a super competitive race.

The showpiece races were the UK Athletics Championships for 10,000m and they featured the cream of the crop as far as British distance running goes, as well as some top names from around the world.

Samantha Harrison put in a very brave performance to take the race on in the women’s one and she was driving the pace, making it much faster than it otherwise would have been.

She was making most of the other very high standard runners look like they were standing still as she flew past and lapped them. Having built up quite a big lead at one stage, she ended up getting reeled in by Jessica Judd.

They then got into a tremendous battle for a few laps before Jessica began to pull away with just a couple of laps to go. She picked up the victory in 31:22.24 with Amy-Eloise Markovic coming through to snatch 2nd place in 31:25:57.

That meant Sam had to settle for 3rd in the end but she still came out of with a fabulous new PB of 31:30.63 which she thoroughly deserved for the way she attacked the race.

The men’s race was won by Italian athlete Yeman Crippa who raced to an astonishing time of 27:16.18 to dominate proceedings. Sam Atkin of Lincoln Wellington won the British Championships when he crossed the line 2nd place with a time of 27:31.98. Leeds man Emile Cairess took 3rd place in 27:34.08, with Israeli athlete Ayala Gashau coming in 4th in 27:49.88.

It was a brilliant evening of racing and it was great to see Harry playing his part in such a highly regarded and nationally recognised event. Off the evidence of that, it certainly looks like he was made for the big stage.