Heidi Tregenza in Transylvania, Anthony Clark ‘Fetch’ Member of the Month, Night of the 10000 PBs and YDL (Lower) at KP 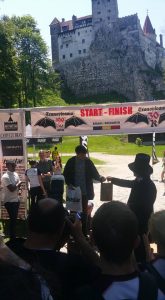 Heidi Tregenza receives her award for 2nd lady in the Transylvania 30k, with Dracula’s Castle in the background

Well done to Heidi Tregenza, 2nd lady in one of the Transylvania 100 races on 21 May. This event is a ‘Mountain Ultra’ which takes place, unsurprisingly, in Transylvania, Romania, and consists of three races of 100k, 50k and 30k distances, all starting and finishing at Dracula’s Castle. Heidi competed in the 30k race, which she describes as “the toughest thing I’ve ever done, especially being so undertrained”. In fact, Heidi was leading the ladies’ race for the first half, to be overtaken by a Swiss lady, no doubt used to mountain races. Heidi then managed to get lost for a while, adding 1k to her distance, so she was delighted to finish still as second lady. The profile of the race shows a climb from the start at 750m to just over 2300m, then a drop, and up again to 2308m, then an undulating drop back to the finish at 750m. So who knows how Heidi would have done had she been fully trained for the event, and without getting lost!

Following his international debut at the Anglo-Celtic 100k Plate, Anthony Clark is joining the team of BAC Ultra Runners who have achieved national, and indeed international, recognition.  Anthony is a member of ‘Fetch‘, a website for runners, cyclists, etc., which clearly has a large following, and is well worth a visit.  Anthony recently achieved the accolade of Fetch Member of the Month, which resulted in an interview consisting of numerous questions posed by members from all over, all of which Anthony answered fully and with humour.  The interview is available at www.fetcheveryone.com/motm_interview.php?id=7729, and is a really interesting read.  BAC‘s Ultra Runners, loyal to the club, Anthony, Steve Way, Jon Sharkey, Jez Bragg, with Toby Chapman and Jacek Cieluszecki also now dipping their toes into this discipline, really bring a great deal of prestige, locally and nationally, to BAC, which is very much appreciated.

Well done to the BAC/New Forest Juniors composite team, who finished second in the YDL (Lower) match at Kings Park on 21 May.  With 520 points, the team, which competes in Division 2W, was only 26 points behind the winners, so a win for the season appears there for the taking.  This was the second match of the season, but an aggregate of the scores of both matches isn’t, for some reason, as yet available.  These are the athletes who took part (both BAC and NFJ): U15B – Joe Haywood, Harry Grubb (won 100m and 300m B), Sam Caplen (200m A and won HJ A and LJ B), Mario Youssef, Charlie Castro, Tom Farwell (2nd 1500m A), George Plumber, Jim Dence (2nd 80mH A, won HJ B), Fraser Spall (DT, HT and won JT B), Mathew Forster:  U13B – Owen Williams, Jay Turner, Aiden Dure-Smith, Thomas Forster (200m, LJ and won 800m A), Daniel Williams, Rhys Allen (2nd JT A, won SP A), William Batchelier:  U15G – Elle Ward (100m and won LJ B), Rebecca Hannibal, Lily Roberts, Juliet Smallbridge (won 75mH B and 300m B), Emma Ferris, Martha Pestridge, Yasmin Bridet (2nd 75mH A), Serena Sutherland, Jessica Gordon (won HJ A), Lauren Sheerin (won HT B), Louise Galloway, Gemma Willford:  U13G – Christiani Orioni, Elsa Smith, Jasmine Gordon, Flo Kennedy, Emily Wheeler, Rebecca Mitchell, Natalya Smith (won 1200m B), Isabelle Franklin, Amelia Gordon.  Well done to everyone!