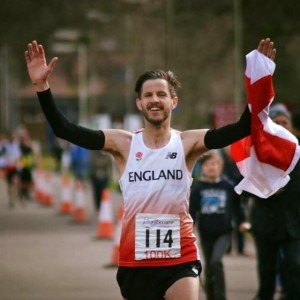 The Easter weekend was very busy for BAC, and apologies for the delay in reporting, particularly on what will surely be one of the BAC achievements of the year – Anthony Clark’s amazing debut 100k race, in which he was part of a winning England team.

The race in question was the Anglo-Celtic 100k Plate, held in Perth, Scotland on 27 March, in which Anthony was competing as part of an England team of four, thus continuing what has become a BAC tradition of representation in this event, Steve Way and Jon Sharkey (twice) having previously run for England.  This was Anthony‘s first race (or even run) at this distance, but nevertheless he had a firm race plan (helped by advice from Steve and Jon, and also Jez Bragg), targeting a 7.15.00 finishing time, but would be content with a 7.25.00 finish in the top 10.  In the event,  Anthony missed out on a bronze medal by a mere 32 seconds, finishing fourth in 7.17.43.  England were the clear winners, with Anthony‘s team mates Paul Navesey winning the race, and Chris Singleton and Nathan Montague finishing 6th and 7th respectively.  A look at Anthony‘s lap times (the course consisted of 42 laps) reveals that he is cut out for Ultra running.  These are described in the England Athletics report of the race as “outstandingly consistent”, and considering that each and every lap, bar one, was run in 10  minutes, plus only slightly differing seconds, that is hardly an exaggeration.  The one lap outside this schedule, run at 11.19, is perhaps explained in Anthony‘s blog, in which he mentions ‘stomach issues’ which resulted in an ‘unplanned stop’ which fortunately had the desired effect.  The last six laps are counted down by race officials, which seemed to make the laps fall away, and during which Anthony was able to move from 6th to 4th, and, into the last lap, with the 3rd placed athlete over a minute ahead, keeping 4th place seemed to be the most important objective.  However, with hat and gloves discarded, Anthony was able to “put the hammer down” and by the midway point of the lap the distance to third place was down to 150 metres, only 30 seconds or so in front at the line.  Anthony says of this moment “the feeling, the buzz and emotion of running for your country, having a great race and finishing as the chaser and not the chased only added to what is one of the proudest moments of my life and definitely my proudest sporting achievement”.  Anthony pays tribute to his support team, essential in a race of this distance, and particularly to his “amazing wife” Nicki, who, for seven hours, stood in the cold for lap after lap handing him his fuel and “just being there”, and also his parents, who not only cheered Anthony and the whole England team on, but also looked after the children, Jasper and Florence, “whilst Daddy was running in circles and Mummy was looking after him”.  Congratulations also to England‘s ladies’ team,  who won the ladies’ Anglo-Celtic 100k Plate competition, consisting of Melissa Venables, who won the ladies’ race, Edwina Sutton, who was second, and Katie Samuelson, 4th.  Well done to everybody, but particularly to our own Anthony Clark, of whom we are very proud!

The BAC Spring Open was held at Kings Park on Sunday 27 March, despite the track being covered in water early in the day following the passage overhead of storm Katie.  Well done to everyone who worked very hard to clear things up to enable the meeting to go ahead.  There is a link to the full results on the Home Page of this website.

Dave Parsons and Ian Graham travelled to Guernsey over the Easter weekend for the annual Guernsey Easter Running Festival, which consists of four races in four days, this year with a revised format involving shorter distances.  One of the races is a four-person relay, for which Dave and Ian teamed up with Angela Jones, a Welsh Ultra Champion, and Geoff Scott, of Poole Runners.  Geoff was absent from Guernsey in 2015, which explains the name of the relay team.  A full report of the Easter weekend in Guernsey will follow.

On Easter Saturday, 26 March, the only BAC athlete competing in the annual Rotary Quarter Marathon, starting and finishing at Boscombe Pier, was Graham Robinson, who won the race in a time of 36.56.  Graham was very much a part of the remarkable recovery of the Senior Mens’ team from near certain relegation to Division 1 safety in the recently finished Hampshire Cross Country League season.