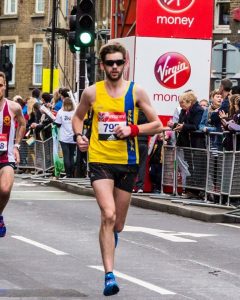 Was that really Helen? Yes, it really was Helen Ambrosen before our very eyes on BBC’s build-up to the London Marathon! Helen was running as part of the Children In Need team and one of 13 BAC athletes who completed the marathon on Sunday 24 April. Of those, six ran PBs, some very substantial, and although not counting amongst those, hopefully Helen is satisfied with her run, the first of a number she is running this year.  The BAC squad (early indications are of a 3rd mens’ team place – to be confirmed) was led home by Steve Way, who put up his marker from the start, finishing in 2.20.50, after some very consistent running, taking him to half-way in 1.09.02.  Well done to Steve after a difficult couple of years.  Steve was 5th in the ‘club’ category, and 1st V40, and was 2nd V40 overall, the only V40 in front of him being Serhiy Lebid, Ukraine.  Jacek Cieluszecki, Toby Chapman and Anthony Clark all ran closely throughout the race, all passing half-way within 50 seconds of each other, with Jacek finishing in 2.28.17, Toby in 2.31.38, knocking all but 9 minutes off his PB, and Anthony in 2.32.25, a remarkable result considering how recently Anthony was running 100k in the Anglo-Celtic Plate.  Next to finish was Paul Dixon-Box in 2.40.54, almost 8 minutes inside his previous PB.  Yet more PBs from the next two BAC finishers!  Sanjai Sharma‘s time of 2.44.42 was an astonishing 11 minutes, almost, inside his PB, and Tom Paskins sliced almost 2 minutes off his PB with his time of 2.53.28.  Next to finish were four of our ladies, led by Nikki Sandell in 3.01.06, a new PB by some 36 seconds, then Emma Dews, running only her second marathon (the first some years ago), in 3.02.38, followed by Gemma Bragg, whose time of 3.23.10 was a PB by almost 4 minutes, and then Caroline Rowley for whom, like Helen, this isn’t the last marathon of the year, in 3.26.39.  We’ve seen Duncan Wells only from time to time recently, but there he is in the results, with a time of 3.33.40, well over his PB, perhaps reflecting a lack of training.  Helen‘s motivation this year is the money being raised for charity, rather than breaking records or winning her age category, which she has done in the past, so her time of 3.45.31, well outside her PB, is surely satisfactory, particularly as Helen must keep something in reserve for more marathon running later in the year!  Well done to everyone – another great London Marathon for BAC! 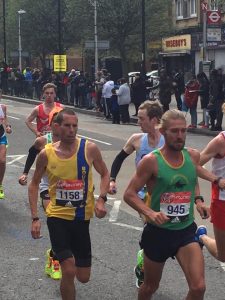 (See below for some marathon photos – more photos on Twitter) 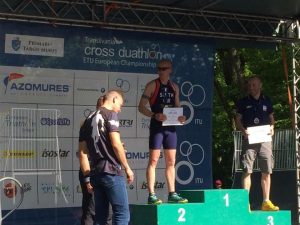 Ross Smith on the podium at the European Duathlon Championships

Meanwhile, over the same weekend, Ross Smith was competing in the European Cross Duathlon Championships in Rumania.  Our expectations of Ross in Duathlon competitions are very high, and he certainly didn’t disappoint, winning a silver medal in his age category, 35-39, and finishing 5th overall – don’t forget, this is a European Championship!  The event took place on the ‘Plateau Cornesti’ (which probably means at high altitude), and involved a 8.25k run, three laps of a course involving 81m elevation, a 28k bike ride, one lap with a 198m elevation, and a final one lap 2.75k run.  Ross‘s times were 40.39, 1.16.25 and 16.31, giving a total time (including transition) of 2.15.04, against a winning time in the age category of 2.10.31, and way ahead of the third time of 2.23.45.  Well done Ross – an amazing achievement. 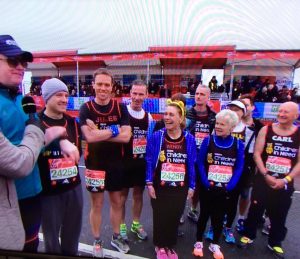 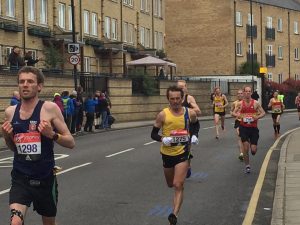 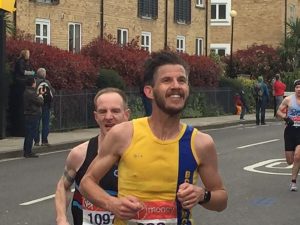 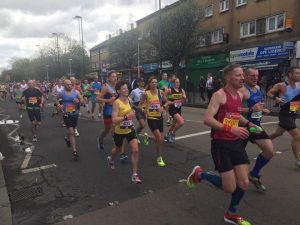 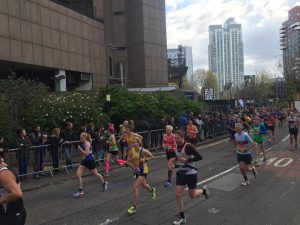 Gemma Bragg on her way to a PB 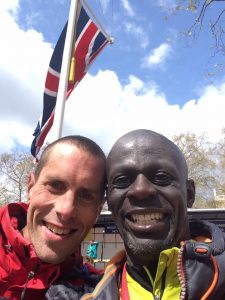 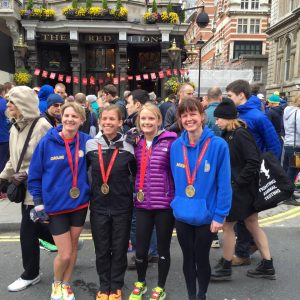