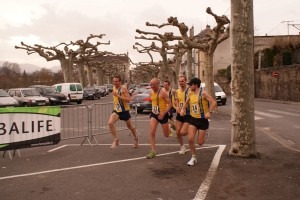 There have been numerous BAC wins and PBs in the Bournemouth and Poole Parkruns recently, together with a visit to one of the Kings Park races by BAC legend, John Boyes, visiting briefly from his home in France – more about John and the Parkruns later on.

The Kingston Lacey Running Festival took place on Sunday 8 June, consisting of 5k and 10k races and a Half Marathon.  Gemma Bragg flew the BAC flag at the event, finishing 10th of 224 finishers in the Half Marathon.  Gemma‘s excellent time of 1.32.23, on an off-road course, gained her a podium place as second lady.

Although not road-running, mention has to be made of the contribution BAC road runners to the club’s win in the BAL National League 4 at Mile End (wherever that is) on  7 June.  As a result, BAC, after two matches, are 3rd (of 6) in the League and, bearing in mind just how comprehensive was the win at Mile End, if this level of performance can continue throughout the season there is no reason why the talk of promotion in the Bournemouth Evening Echo report should not be realised.  Steve Way and Jacek Cieluszecki were 1st and 2nd overall in the 5000m, in times of 14.54.85 and 15.26.90 respectively, thus winning maximum points as winners of both the ‘A’ and ‘B’ string races.  Jon Sharkey was 2nd in the 3000m s/c ‘B’ and in the 1500m Rob McTaggart was 4th ‘A’ and David Long 2nd ‘B’.  Many congratulations to the entire BAC team on this highly creditable win which, unfortunately, is apparently not being reported on in full elsewhere on this website.

So to the Parkruns.  It was a pleasure to welcome BAC Life Member John Boyes back to Bournemouth on Saturday 7 June when he ran the Parkrun in Kings Park.  There is no space here to detail all John‘s achievements, but one of the most memorable of these must be his win in the Glasgow Marathon in 1984 in a time of 2.14.  Following a 2.17 run in London earlier, John had been picked to represent England in the Glasgow race, which doubled as an International competition, and was part of the winning England team.  The next year John went on to run his marathon PB of 2.13.20 in Holland.  The photograph shows John with BAC athletes at a training week organised by John at his home in France one of whom is, of course, Steve Way, BAC‘s ‘legend in the making’ and surely Steve must have benefitted greatly from his contact with John, who, along with his wife Kath, continues to provide training/activity holidays (or just holidays!) in a beautiful part of France details of which are available at www.pyreneanretreat.co.uk.  At the Bournemouth Parkrun, John, now M55-59 category, was 13th of a total of 156 in 20.37 (assisted by his dog, Robbie),  and 2nd in his category (to BAC‘s Jud Kirk!)

Staying with the Bournemouth Parkrun of 7 June, congratulations particularly to Emma Dews, 3rd overall and 1st lady, Brendon Meredith, 9th overall and 2nd JM15-17 and Elsa Charlwood, 16th overall and 1st JW11-14.  Also running, in addition to John Boyes, were Jud Kirk, 1st M55-59, Mike Cowham and Will Price.  The week before, 31 May, Emma was again 1st lady (6th overall).  Roy Long was 2nd in what was then a PB time for the course, and in 3rd place was Ross Smith, son of Barry Smith, in his day one of BAC’s star runners and now a coach.  Ross is clearly a ‘chip off the old block’ and has improved rapidly over the last few weeks as a result of regular participation in BAC training.  Ian White was 8th and very closely following Ian were two more BAC winning youngsters, namely Bridget Dence, who ran a PB for the course and was 1st in her age category (and 2nd lady after Emma), and Sebastian Hearn, also winner of his age category.  Two weeks later, 14 June, and again there was considerable BAC participation in the Bournemouth Parkrun.  Roy Long was again 2nd, and improved on his PB of two weeks earlier, and Emma, for the third week running, was 1st lady (5th overall).  Emma was followed in 6th place by Damian Boyle and 11th was Ian White.  Next BAC athletes were Jud Kirk, Steve Cox, Joe Price, Helen Ambrosen, Patrick White (Ian‘s son on break from university), Samantha Laws and Will Price.  It is interesting to note that on 14 June at Bournemouth 1st and 3rd were ‘unknown runners’.  Could either of these have been David Long, again running without his barcode??!  193 competed the Bournemouth course on 31 May, 156 on 7 June and 234 on 14 June. Meanwhile, in Poole Park, BAC were also achieving wins and PBs in the Poole Parkruns.  On 31 May Jon Sharkey was the winner, with Chris O’Brien 15th (of a total of 513). Chris went on to run the Poole 10k the next day.   The following week, 7 June, of the 489 finishers, Bridget Dence ran well to finish as 1st lady, 15th overall and a PB for the course.  The next week, 14 June, saw another BAC winner in the form of Jacek Cieluszecki, and in 5th place, of a total of 513, was Jamie Grose with a PB for the course. 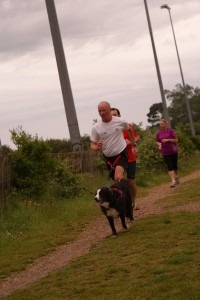