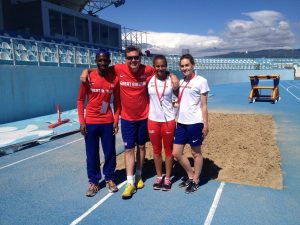 Zac Kerin with three of his U18 GB team in Georgia

This weekend saw two of BAC‘s athletes competing in international fixtures, and one of our coaches at a third.

Congratulations to Patrick Sylla, who qualified to compete in the IAAF World U20 Championships, an amazing achievement in itself.  The Championships are being held in Bydgoszcz (Jacek,how is this pronounced?!), Poland, and are continuing as this is being written.  Patrick jumped on Friday 15 July, the first day of the Championships, but, despite jumping 7.36, his second ever best jump, Patrick didn’t qualify for the final.  However, that takes nothing away from Patrick‘s achievement, of whom we are extremely proud, and, for Patrick, competing in Championships at such a high level – don’t forget, these are WORLD Championships – gives him massive experience in jumping against the best jumpers in the world in his age group.  It’s also nice to know that at least some of the local media are taking an interest in what is going on – an item concerning Patrick was shown on BBC South Today (believed to have been broadcast on Monday 18 July), which was filmed during a training session at Kings Park (and featuring our Coach Tim Ward),and furthermore, Patrick was interviewed at Kings Park last week by a journalist from BBC Radio Solent, and the interview was broadcast on the morning of 19 July.  Well done, Patrick!

Another athlete of whom we are extremely proud is Danielle Broom, who was also competing in an international event over the weekend.  For Danielle, it was SIAB (Schools International Athletic Board) British Schools International at the Julie Rose Stadium , Ashford, on 16 July.  Danielle was throwing the Discus for England, in a competition involving England, Scotland, Wales and Ireland.  Danielle helped England to a comprehensive win by her throw of 40.93, which was a win in the Discus Throw competition.  It is a measure of how well Danielle performed that, although this throw was the last of her six throws, her second throw of 39.97 would have won the competition!  Danielle has had an exceptional season, with many wins and club records broken, so we wonder what else is to come!

Meanwhile, Zac Kerin was at the European Youth (U18) Championships at Tbilisi, Georgia, as the coach for the GB Horizontal Jumps team.  Zac has been recognised as an international coach for a number of years now, which demonstrates just how lucky we are to have Zac coaching here at BAC.  This was a highly successful Championships for Great Britain, who, at the conclusion of the event on 17 July, led the medals table, and were second in the placings table.  Zac is pictured with three of his athletes, Jude (TJ 15.39m), Eleanour (LJ 6.26m) and Holly (HJ 6.29m). 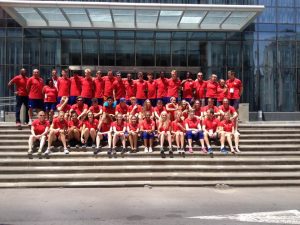 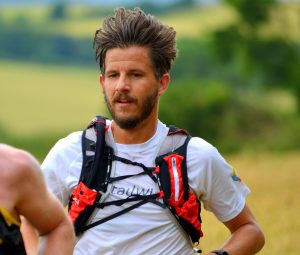 Finally, well done to Anthony Clark who was second in the Dorset Invader Marathon (actually 27.3 miles) on Sunday 17 July in a time of 3.37.25 – there were 256 finishers.  And this was after winning the Dorset Invader Half Marathon the day before in 1.27.56!  In the Half Marathon there were 414 finishers.  This is Andy Gillespie‘s type of race, and, sure enough, Andy was there in the Marathon!  Andy finished a highly creditable 67th in 5.02.19, but it might not have been quite so creditable had he accepted the offer of vodka or cider at 22 miles!  This event is described as “hilly 95% trail”.  So, quite a challenge!

Zac Kerin with three of his U18 GB team in Georgia