Puddletown Plod wins, James Lelliott at BAL and much, much more NOW UPDATED with WYAL results 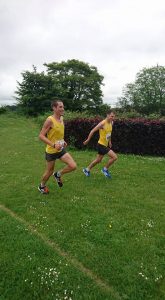 A late substitution for the Puddletown Plod on June 12th ensured that BAC came away with DRRL wins for both the men and the ladies. The race is now a half marathon, achieved by adding a circuit of the school field at the beginning and the end, and was won jointly by Steve Way and Jon Sharkey, who crossed the line together, in 1.16.27. There was then a succession of BAC vests, with Paul Dixon-Box 3rd in 1.18.44, Peter Thompson 4th in 1.18.58 and Sanjai Sharma 6th in 1.20.53.  This was yet another PB for Sanjai, who is ranked number 1 V55 in the country over the marathon distance, following a PB at the Poole 10k only one week earlier.  Our ladies’ team of Emma Dews, Nikki Sandell and Louise Price also achieved victory, with Emma completing the course in 1.27.47, 2nd lady, Nikki in 1.32.42, 3rd lady, and an ever-improving Louise in 1.48.51.

There appears to have been no report of the BAL fixture at Chelmsford on 4 June, but this cannot be allowed to pass without mentioning the performances at Chelmsford of James Lelliott.  Before moving on to that, to summarise BAC‘s position, the team was 4th on the day (of 8), an improvement from the 5th position at the first fixture of the season, and, although, after 2 fixtures, BAC remain 5th in the standings, 3rd to 6th positions are very close, so a move further up the table is there for the taking.  But the star of the show on 4 June was definitely James Lelliott with his wins and graded performances!  In the long jump James won the A string with a Grade 1 jump of 7.06, he also won the javelin A string with a Grade 1 throw of 58.95, in the triple jump he was 2nd A string with a Grade 2 jump of 15.03, and he was 3rd in the discus A string with a Grade 2 throw of 41.65.  And, in addition, James was part of the BAC winning 4x100m team, which also included Adam Carpenter, Scott Rutter and Kevin Hodgson.  Other notable performances at Chelmsford were Josh King, 2nd A string 3000m s/c in 10.03.34, Jamie Grose, 2nd A string 1500m in 4.00.34 (a Grade 3 performance), Kevin Hodgson, 3rd A string 200m in 21.92 (Grade 2) and David Long, 2nd A string 5000m in 15.24.95. 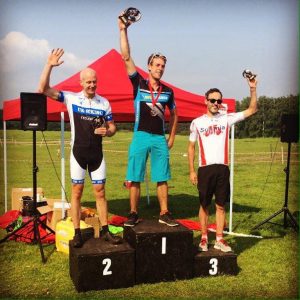 Maybe not athletics as such, but very much involving a BAC athlete, Ross Smith yet again found himself on the podium, this time at the 5th round of the Southern XC Regional Championships (mountain bike racing) at Crow Hill in the New Forest.  Ross was second in a race of 4 laps.  We don’t know how long each lap was, but it must have been a fair distance, as Ross‘ time was 1.14.57. 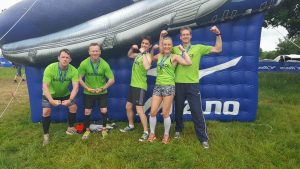 Chris O’Brien has also been competing in a rural lengthy event, but there the comparison with Ross‘ race ends!  Chris was part of a 5 person team (name – Bugface!) which took part in an Endure 24 race at Glastonbury.  This involves teams of 3 to 5, or individuals, completing as many laps of a 5 mile course through Wasing Woods (“incredibly scenic”!) as possible in 24 hours.  Chris‘ team was 11th of 127 teams in their category, and were obviously, and justifiably, very pleased with their result! 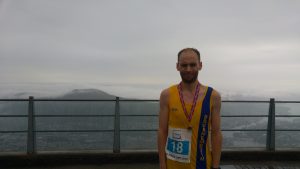 Further afield, Max Catterall has been competing (and proudly wearing his BAC vest) in what might be described as an interesting race in Norway.  The race website is entirely (with one exception) in Norwegian, so it isn’t easy to fathom out exactly the details of the race.  However, there is a picture of a mountain, showing a course, from way down, up the mountain to the very top, where there is the one English word on the website – FINISH!  The race profile shows only climbing, apart from a very short flat, nothing downhill.  There is also mention of 1730m – could that be the summit?  This is what Max says about the race – “Managed 64th out of just under 200.  Climbed 568m in 3.5k for an average gradient of about 16%, it was a flat start so the top part of the course was regularly over 45% and needing a bit of hands and knees action!  Bit disappointed with the result but didn’t feel great going into the day, definitely underprepared for how tough the course was and how hard the Norwegians pushed.  My average km pace went from 4:32 to 8:17, 9:34 before managing the final 550m in a super speedy 18:25.  The course got steeper, more technical and the second half was virtually a waterfall with the storm that settled on top of the mountain.  Incredible race and atmosphere though, beers and waffles at the top were ace, big loud crowds for most of the climb (given the weather I’m impressed anybody was there!).  Definitely one to do.  I’ll be back next year for sure.”